TESTAMENT OF YOUTH is a searing story of love, war and remembrance. Based on Vera Brittain’s classic First World War memoir, this is the powerful true story of one young woman’s struggle to survive the horrors of war – a war which robbed her of everything and everyone she held dear, but was ultimately unable to break her spirit.

TESTAMENT OF YOUTH will be released in cinemas across the UK and Ireland on 16 January 2015. 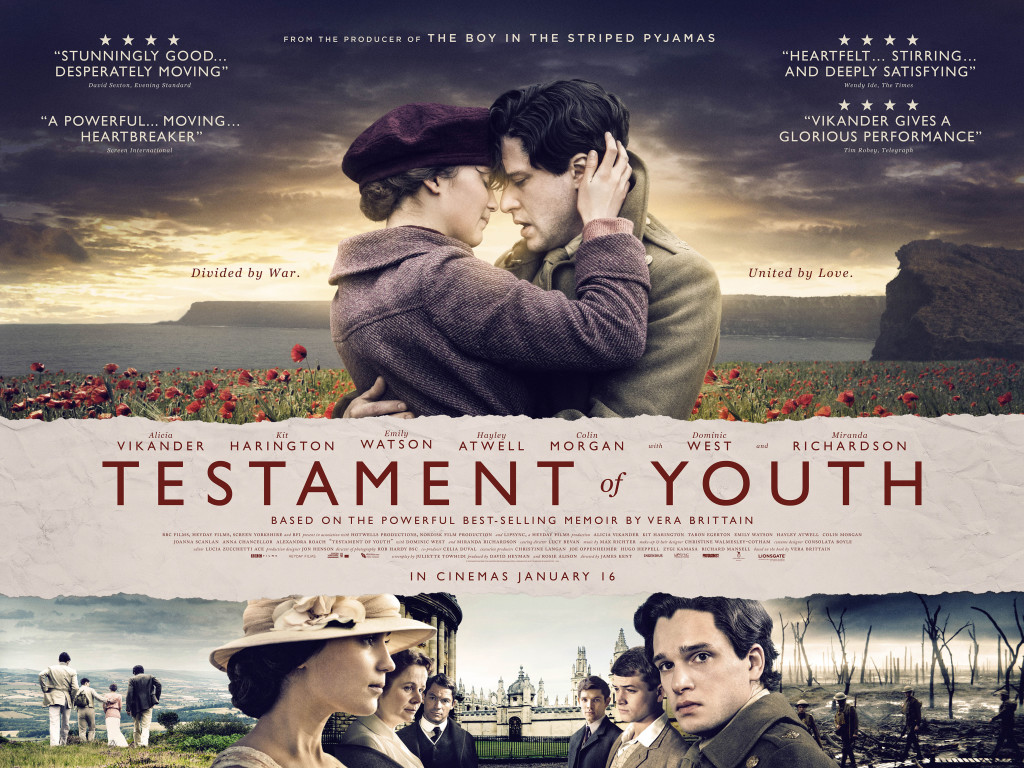 Testament of Youth is a new Britishbiopicdirected by James Kent and written by Juliette Towhidi, based on the First World War memoir of the same name written by Vera Brittain. The film stars Alicia Vikander as Vera Brittain and Kit Harington as her fiancé Roland Leighton.

It is the story of the young Vera Brittain, who postponed her studies at Oxford University during World War I to serve as a Voluntary Aid Detachment nurse in London, Malta and France, and later became a writer and a pacifist.

The recent WW1 and WW2 celebrations across Europe have provided lots of material and food for thought for the young generations who have never been exposed to any first hand tales from the Great wars. As a mother of a young boy living in a free country where we enjoy a great life full of opportunities, I feel compelled to teach him that this freedom is not to be taken for granted but has been protected by the huge efforts of young men and women who fought for ideals and values and for the life we enjoy today.

Testament of Youth provides lots of information and sound bytes to all parents who want to get a feel for what it means fighting for freedom. It is set during WW1 and is based on Vera Brittain’s memoir book on her accounts from the war: how she fought for her ideals and how she coped with the big losses in her life during the war (brother, fiancée and friends).

It’s a sad movie but its beauty is in the contrast between the life before and after the war. After such a devastating war, people’s perception of freedom and safety changed forever.

Photography is outstanding in this movie and is essential to tell the story and allow the perception of a deep historical change.

I loved the changing colours of Vera’s hats that mirror the changing moods during the film: Pastel colours in the first half and darker ones in the second half. The clothing also reflect the moods of people. The accurate details in the historical reconstruction of locations and fashion in this movie are top class. I have my grandmother’s photographs from the WW1 era and I could recognise the hats and clothes.

I loved the intrigues of young lovers who were chaperoned before WW1. It’s so refreshing to see the magic of falling in love for the first time at 18. I remember similar tales by my grandmother and that made me (and other people in the audience) smile. We follow Vera throughout her becoming a woman making life changing decisions, i.e. studying at Oxford University despite her dad’s opposition or supporting her brother’s decision to sign up to war against her father’s will.

Testament of Youth is the story of WW1 told from the women’s perspective. Young girls had to grow up fast to cope with desperate situations, support their men and be left alone to deal with life scenarios they would have never experienced before the Great War started. Everything started when they waved goodbye to their beloved soldiers at the train stations in 1914 and when they were reading the ‘Fallen in combat’ lists in the newspapers.

Be prepared to be heart-broken as this film is very realistic and based on a true story.

Overall I loved Testament of Youth although at times it felt a bit slow but even then the photography never failed to impress me.

This entry was posted on Thursday, December 18th, 2014 at 7:30 pm and is filed under Movies. You can follow any responses to this entry through the RSS 2.0 feed. Both comments and pings are currently closed.