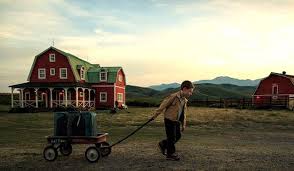 His teachers at school don’t spot his talent for science, so he sends a design to The Smithsonian Institute in Washington – and ends up winning an award.  To collect it, he hitches half way across the country.  Yet little does the Institute realise that not only is he just ten years old, he’s hiding a dark secret.

The trailer gives a brief hint of what to expect as far as the 3-D is concerned, but to get the full benefit you really do need the big screen and those glasses.  The film has a glorious vision which is brought to life with wonderful 3-D graphics that float around the screen.  Some are sketches of T S’s inventions, others illustrations of his theories.  We even see what’s happening in some characters’ heads so that we understand what they’re thinking.

The three sections of the film are also introduced by pop-up book graphics, which resemble T S’s mother’s diary.  He’s taken it on his journey to Washington and it’s full of photographs, drawings, hand prints and notes, which help the ten year old understand his mother, her feelings – especially about his twin brother – and her relationship with his father.

Instead of being just a bolt-on that we’ve come to expect, this is one of those rare instances where 3-D comes into its own and it makes a real difference to the film. Together with the beautiful photography, T S Spivet is a joyous feast for the eyes that just begs to be watched on the big screen.

A gentle thread of humour runs through the film.  Some of it comes from the characters T S meets on his travels, others from his resourcefulness, the highlight being when he poses as a cardboard cut-out in a motorhome so he can avoid the police.  And, while his mother’s ability as a scientist is never in question, her talents in the kitchen most certainly are and her gift for burning toast is unquestionable – as demonstrated by her mounting collection of burnt-out toasters!

Director Jean-Pierre Jeunet, who made the delightful Amelie, gets good performances from all his cast.  Kyle Catlett makes an impressive debut, made all the more remarkable as the entire film rests on his little shoulders, while Helena Bonham Carter gives an unusually low-key performance as his mother, and is all the better for it.  Judy Davis gets the showy part, as the under-secretary at the Smithsonian Institute: her hair style gives her more than passing resemblance to Vogue’s Anna Wintour.  She’s also responsible for the film’s 12A certificate with a champagne fuelled outburst!

My rating is 8/10.  T S Spivet is 100 minutes of pure delight.  Imaginative, funny and with a joyous vision, it’s easily one of the most intelligent and creative family films that you’ll ever see.  Originally titled The Young And Prodigious T S Spivet, the makers probably decided such a long title was asking a bit much of the audience.  But if they ever revert to something longer, The Beautifully Magical T S Spivet would be closer to the mark.

T S Spivet is on release around the UK.

Tags:  3-D Callum Keith Rennie Helena Bonham Carter Jean-Pierre Jeunet Kyle Catlett T S Spivet
This entry was posted on Friday, June 13th, 2014 at 7:00 pm and is filed under Movies. You can follow any responses to this entry through the RSS 2.0 feed. Both comments and pings are currently closed.