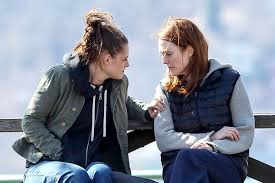 Linguistics professor Alice Howland (Julianne Moore) notices her memory is deteriorating, yet she’s just celebrated her fiftieth birthday.  The diagnosis of early onset Alzheimer’s is devastating and the condition develops quickly, so she’s soon unable to lecture.  She then sets herself a daily test, essential questions she needs to be able to answer, and also leaves herself a video message on her laptop about what to do on the day when she can’t answer those questions any more.  As she deteriorates further, her husband John (Alec Baldwin) decides to take a new job and her youngest daughter Lydia (Kristen Stewart) puts her acting career on hold to look after her.

There have been other films on Alzheimer’s and dementia – Iris for one, Away From Her for another – but Still Alice has been made and released at a time when there are more sufferers and awareness is growing.  And that makes it the highest profile one so far.

Moore herself has done much to contribute to that, not just through her performance, but her numerous interviews on the research she did for the role.  It’s a luminous piece of acting, tender, gentle and never sentimental.  Most remarkable of all is the way her physical deterioration creeps up – not just on her but on the audience as well.  It’s almost imperceptible, until we see what she looked like when she filmed the video.  And it’s a transformation that’s achieved by Moore’s acting and the minimum of make-up.  Simple as that. 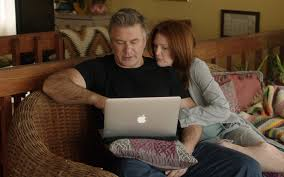 However, it’s such a strong performance that the film is completely built around it.  Without Moore, it would disappear down a black hole in the middle, because the rest of the characters, mainly Alice’s family, are less well defined.  There is one exception, however, and that’s a quietly impressive Kristen Stewart as the youngest daughter, Lydia.  An aspiring actress who is determined to go her own way, she’s the one who willingly takes on responsibility for her mother’s care, something the rest of the family seem reluctant to do.  It’s full of honesty and sensitivity.

That isn’t the only problem with the film.  Alzheimer’s is a condition that affects increasing numbers of people, and their families, yet the film seems to fight shy of showing us some of its harsher side.  Only at the very end do we get an inkling of its realities.  Alice is a very docile patient, so there’s only one midnight panic when she can’t find her phone, she doesn’t wander off, have many accidents or even get angry.  And because her family is wealthy, she gets the best possible care.  But what would have happened if they’d been less affluent and been on Medicare?  Of if they were in the UK and using NHS care?  There’s a real sense that the makers have backed away from making something more challenging and thought-provoking. 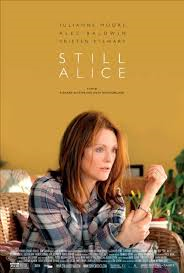 Julianne Moore herself gets 8/10 for her performance but, in truth, Still Alice as a film isn’t much more than a beginner’s guide to Alzheimer’s.  Compared to other films on the subject, it dodges many of the tougher questions about the disease and the issues that go with it.  It’s fortunate to have such a stellar performance at its heart.

Tags:  Alzheimer's Away From Her Best Actress Iris Julianne Moore Kristen Stewart Oscar Still Alice
This entry was posted on Friday, March 6th, 2015 at 11:00 am and is filed under Movies. You can follow any responses to this entry through the RSS 2.0 feed. Both comments and pings are currently closed.