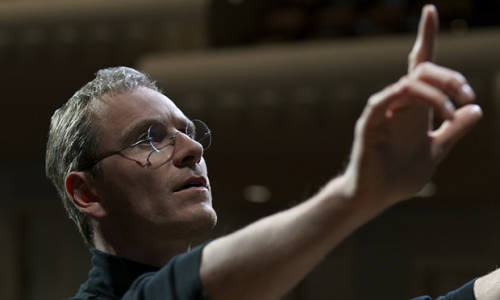 This is no conventional bio-pic of the life of the Apple front man.  The film comes in three acts, each one culminating in a key moment of Jobs’ career, a major product launch.  The Macintosh launch in 1984, NeXT in 1988 and the iMac in 1998.  We’re never shown the actual launch: what we witness is events behind the scenes, played out in real time.  They each follow the same pattern, have similar components but take the Jobs story forward every time, looking at his thorny relationship with his daughter and his equally troublesome partnerships at work.  And, most importantly of all, it’s a portrait of the man himself.

The focus is on Jobs and his personality.  And the man we see on screen would have been more than happy with that: he wouldn’t have understood any other way of telling the story.  He’s clearly an exceptionally talented man, one with vision and ambition, but it goes hand in hand with a personal tyranny, a brutal streak of ruthlessness and a megalomania that’s utterly dismissive of hard work and/or loyalty.  They mean nothing.  His childhood – he was adopted twice – is offered as a part explanation for this cold blooded detachment, but it isn’t the full story.  It does, however, give an insight into his most significant relationship in the film.

He and his daughter, Lisa – the daughter he originally denies – have never been close.  A bright toddler in the first third of the film, she grows into an angry teenager in the final part and you can’t blame her.  Damaged by his rejection in her early years, she desperately wants a relationship with her father and she’s clearly inherited his intelligence.  They will never be comfortable with each other, despite having Jobs’ marketing director, Joanna Hoffman (Kate Winslet) as a go-between.  She’s far better than her boss at communicating with the girl. 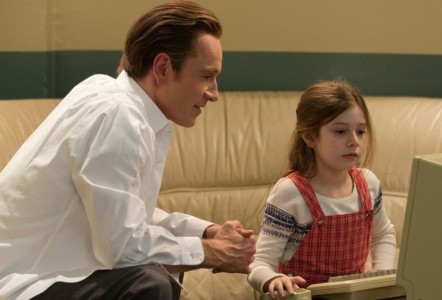 Fassbender is simply sensational as Jobs, his best performance this year and one that is already attracting awards buzz.  Charismatic, commanding, a nightmare of a man to work with, it’s an utterly riveting piece of acting.  But, although it’s very much his film, he’s also dependent on his co-stars being up to mark for those showdown scenes.  The confrontation between Jobs and John Scully (Jeff Daniels) sets the screen alight and that’s just as much down to Daniels as Fassbender.

Kate Winslet’s performance is more problematic and it’s all down to her accent.  The film was shot chronologically and for the first two parts she sports a generic and perfectly adequate American accent. But, come the third act, it’s changed to something more Eastern European with a twang of Yiddish.  It’s come from nowhere and makes no sense at all because, if it was her native accent, it would have been stronger at the start and faded as the film progressed.  It’s the wrong way round, distracting and detracts from what is actually one of Winslet’s better performances.

Aaron Sorkin’s script typically gives the cast plenty to get their teeth into.  His best known phrase “Walk with me” (The West Wing) doesn’t put in an appearance, but there’s plenty of lengthy conversations taking place on the hoof.  It’s sharp and insightful and the challenge of writing for scenes to be played in real time gives it real discipline as well. 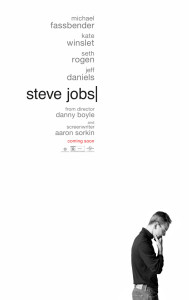 Business and internal politics have never been so riveting!  Jobs himself may be regarded as a visionary hero, but here he’s very much the anti-hero, professionally and personally.  It’s a huge achievement by Boyle and Fassbender to make such an engrossing film about a character who is essentially so unpleasant.  You might not like him, but you can’t take your eyes off him.

Steve Jobs is released around the UK on Friday, 13 November and reviewed on Talking Pictures on Thursday, 12 November 2015.

Tags:  Danny Boyle Jeff Daniels Kate Winslet Macbeth Michael Fassbender Slow West Steve Jobs
This entry was posted on Monday, November 9th, 2015 at 11:18 am and is filed under Movies. You can follow any responses to this entry through the RSS 2.0 feed. Both comments and pings are currently closed.