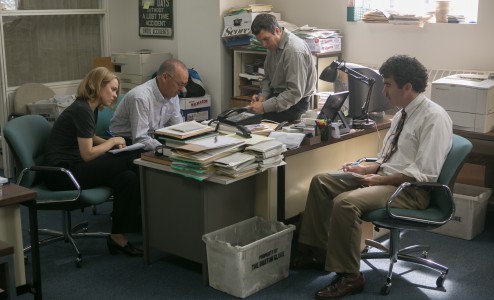 When the Boston Globe recruited Marty Baron (Liev Schreiber) as its new editor in 2001, he asked the investigative team from the Spotlight page to look into a hitherto almost ignored story. That Catholic priests had been abusing children in their parishes. The film traces the team’s investigations, which not only revealed that the scandal involved over 200 priests in the city, but that the Church had deliberately covered it up. The publication of their story lead to the resignation of city’s Cardinal and the Church losing much of its power and influence in the Boston almost overnight.

Nominated for a total of six Oscars, Spotlight is a lower-key film than most of the opposition. It comes close to being unassuming, with no spectacular scenery or high drama. But it is utterly determined – just like its characters – to tell its story and tell it in a way that respects its importance and significance.

It would be easy to paint the church as a wholly corrupt establishment – and, indeed, it’s not a flattering portrait – but that would be far too simplistic. There’s more to it, much of which has to do with the city of Boston itself, which is like a big village. Everybody knows everybody else, or at least their family, and they know each other’s secrets, so every conversation seems to have a hidden agenda. The Church has enormous power, with their buildings dominating the skyline and standing on just about every street corner, almost eavesdropping on what’s being said.

The staff on the Globe are local people, making it a truly Boston paper. And that makes the investigation intensely personal for the team: it involves people they know and, if the story is true, it will affect their families. Sacha Pfeiffer (Rachel McAdams) can’t bring herself to tell her grandmother about the story until it’s published: the old lady goes to mass three times a week and her reaction when the article appears in the paper is a small but incredibly pivotal moment in the film. She represents the thoughts and feelings of just about everybody reading it. The foundation of her life has turned out to be tainted and her faith has been taken away from her. What can she believe in now? 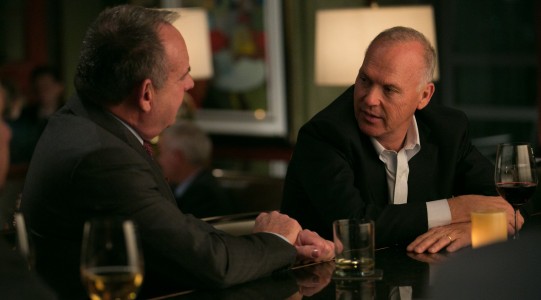 This may not be a film with thrills around every corner, but it’s hugely absorbing and fascinating, building the tension almost imperceptibly so that it’s only at the end that you realise your shoulders are hunched up just under your ears! It’s not a tub-thumper and you wouldn’t call the journalists crusading, but they know when something is wrong and they know a good story. It’s a film with a quiet dignity and determination, rather like the Marty Baron himself.

For once, I can’t pick out the film’s strengths and shortcomings and that’s because everything meshes together into a complete and enormously satisfying whole. The cast work as an ensemble – not just the journalists but also the people they interview and deal with. Liev Schreiber is quietly impressive as Baron, an apparently cold fish who is both principled and, in the words of Spotlight’s editor, Walter “Robby” Robinson (Michael Keaton), likes a good fight. At the other end of the spectrum is Mark Ruffalo’s journalist Mark Rezendes, the most extrovert of the team, a whirlwind who is relentless in his pursuit of crimes that affect him deeply. Ruffalo (also on DVD in Infinitely Polar Bear this week) is terrific, playing against type: watch how he explodes when Robby refuses to go early with the story. What makes that scene even more interesting is that they’re both right. 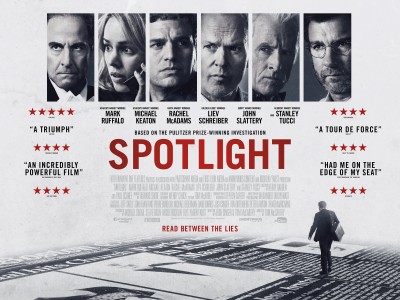 Spotlight is the quiet film of 2016, but such an exceptional piece of cinema that it gets that very rare accolade of ten out of ten. With a serious issue at its heart told with both clarity and dignity, it stands head and shoulders above this year’s other awards contenders. It also saves its biggest shock until the end. A seemingly never-ending list of cases of child abuse perpetrated by priests around the world. It’s all within living memory. But has anything changed? That list gives you the answer.

Spotlight is released in cinemas on Friday, 29 January and reviewed on Talking Pictures on Thursday, 28 January 2016.

Tags:  Best Picture Boston Globe Infinitely Polar Bear Liev Schreiber Mark Ruffalo Michael Keaton Oscar Rachel McAdams Spotlight
This entry was posted on Thursday, January 28th, 2016 at 11:05 am and is filed under Movies. You can follow any responses to this entry through the RSS 2.0 feed. Both comments and pings are currently closed.