Film Review: Spider-Man: Into The Spider-Verse 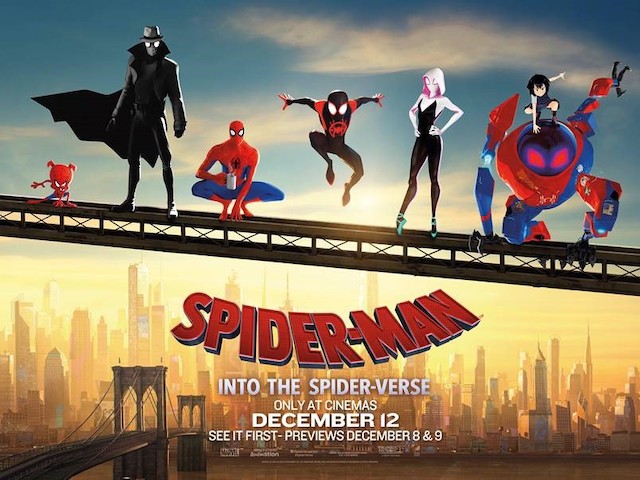 Based on the comic book characters created by writer Brian Michael Bendis and artist Sara Pichelli in 2011, the movie centers on the adventures of African-American/Puerto Rican Brooklyn teen Miles Morales as he tries to fit in at a new private school in Manhattan.

Miles’ father is a by-the-books police officer and his mother is a devoted nurse. They are both loving parents who are proud of their son’s achievements, and want to see him succeed in the new school for gifted students. However, adjusting to the new school proves to be tough on Miles who would rather spend time with his friends from the neighborhood or visit his uncle Aaron, who encourages his talents as a graffiti artist. Although Miles idolizes Aaron, his charming uncle is quite a complex character who has had troubles with the law in the past.

Miles Morales in Sony Pictures Animation’s SPIDER-MAN: INTO THE SPIDER-VERSE.

Miles’ life becomes even more complicated when he is bitten by a radioactive spider, and he finds himself developing super powers, which includes venom strike, camouflage, sticking to objects, incredible hearing, Spidey sense, and much more. Meanwhile, the city’s nefarious criminal mastermind Kingpin has developed an ultra-secret nuclear super collider which opens up a portal to other universes, pulling different versions of Spider-Man (including an older Peter Parker, Spider-Gwen, Spider-Man Noir, Spider-Ham and anime Peni Parker) into Miles’ world.

Aided by familiar characters such as Peter Parker, Spider-Gwen and a kick-ass version of Aunt May, and new characters such as Spider-Ham, Spider-Man Noir and anime Peni Parker, Miles learns to accept the challenges and responsibilities of being a real superhero. He ultimately realizes that anyone can wear the hero’s mask and take action to fight for what’s right.

Spider-Man: Into the Spider-Verse brings a completely new take on Marvel’s beloved web- slinging superhero, which was first introduced by Stan Lee and Steve Ditko in 1962. The movie is directed by Bob Persichetti, Peter Ramsey and Rodney Rothman on a story by Lord, based on the Marvel Comics. The executive producers are the late Stan Lee, Brian Michael Bendis and Will Allegra. Music by Daniel Pemberton. Featuring a diverse cast and a revolutionary approach to the classic Spider-Man mythos, the movie is unlike any of the previous cinematic interpretations of the familiar character. We all loved it with no exception: mums and dads loved the comics look and feel of this animation – which resembles the comics pages flipping style that was so typical of the original Spider-Man TV series, while the children enjoyed all the new crazy characters, the fast action and the adventurous storyline.

Lord and Miller explained the appeal of this storyline to the young generation in a recent interview: “What drew us to Spider-Verse was the fact that it gave us the opportunity to tell the Spider-Man story in a completely new and revolutionary way for the current generation. The movie explores the superhero experience from a fresh angle, while dealing with larger universal themes such as coming of age, taking action and finding your purpose in this world.”

The Spider-Man story has been told so many times but this storyline shows a fresh way to tell a post-modern version of Spider-Man stories. Miles, the new teenager who takes over the Spidey role is the most exciting new character in the Marvel universe. He is a different superhero for our era and meets multiple Spider-people from all of the comics opening up a world of possibilities to us.

The heart of the movie is Miles’ coming-of-age story, but told  in a completely new and unconventional way. One of the key themes of the movie is that we all have powers, and we all need to face up to our responsibilities, regardless of who we are or where we are born.

Peter Parker and Miles Morales in Sony Pictures Animation’s SPIDER-MAN: INTO THE SPIDER-VERSE.

One of the most striking aspects of the film is its dynamic visual style, which goes beyond what audiences expect to see in CG-animated movies and pays homage to the classic look and feel of the comic-books of the Golden Era. There are moments when the frame gets broken into panels, just like you see in comic-books. Then there are flash frames that allow for unusual compositions, and there are new sound effects and stylised visuals that are spread throughout the movie. There are scenes where you feel you inside a comic-book. It’s very exciting to create and very exciting to watch. And it’s choreographed to hopefully change the way animation is done in the future.

Miles Morales is a very cool, interesting kid from Brooklyn – half Puerto Rican and half African American, and he is more of a contemporary city kid who learns how to navigate the world differently and he’s trying to find his way, which is a universal feeling everyone can relate to. The idea of diversity is very important because ultimately the big theme of Spider-Man is that anybody can be under that mask. What the mask says is that when you put it on, you have the heart and soul of a hero. Finally we get a biracial superhero, whose culture, background and upbringing makes him really a different type of superhero – something we have all been eager to see on the big screen for a very long time.

This version of Aunt May is kick-ass and feisty. No surprise she is voiced by Oscar®-nominated actress Lily Tomlin (Nashville, Nine to Five, Grace and Frankie). Seen as the pillar for all Spider-People, Aunt May has been very involved in her nephew’s Spider-Man world, creating gadgets and providing tactical support for his superhero adventures. When May learns that there are Spider-People from other universes who need her help, she’s ready to provide coffee and web-shooters. She even wields a baseball bat to fight alongside them when the villains arrive.  She can definitely hold her own amongst the other crimefighters. Plus, she has this natural warmth and support for Miles.

Voicing the role of Spider-Man Noir is Oscar®-winning actor Nicolas Cage (Moonstruck, Leaving Las Vegas, Adaptation). He is from a dimension that is literally black and white because he is a 1933-era private eye fighting Nazis – he reminded me of Humphrey Bogart in Casablanca. He’s a real hero rather than a superhero.

This animation is really about positive qualities like being heroes and doing the right thing for the community. It’s also great for families, because everyone is represented. There are a lot of gags that appeal to kids and adults. There’s something in this for everyone, for the adults who like the old movies like I do, and also for the kids or the young people who will want to learn more about them. 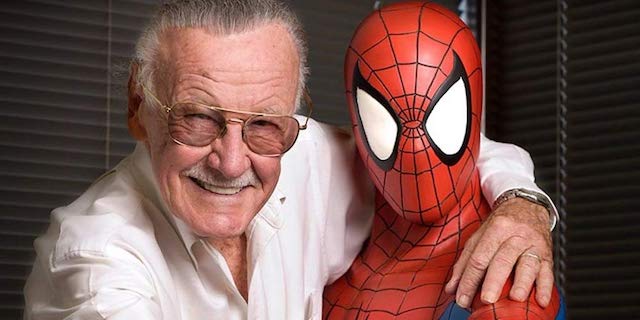 The credits featured a dedication to Stan Lee who passed away a few weeks ago. He always felt that Spider-Man was one of his greatest achievements. In this movie, he has a cameo as the owner of the costume store where Miles buys his first suit. All appearances by Stan’s character were thought through so they would make sense on his way to work, his home or around his store. Those blink-and-you’ll- miss-them moments include him stepping over Miles and Peter after they landed on a sidewalk of New York city and pedestrians walk around them; as well as his character striking the Spider-Man pose in the window of a subway train as Miles swings past it. 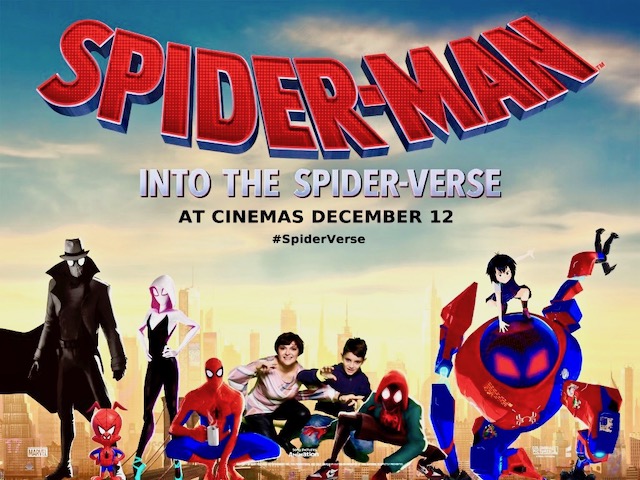 Diego and I becoming some of the new Spidey characters…. 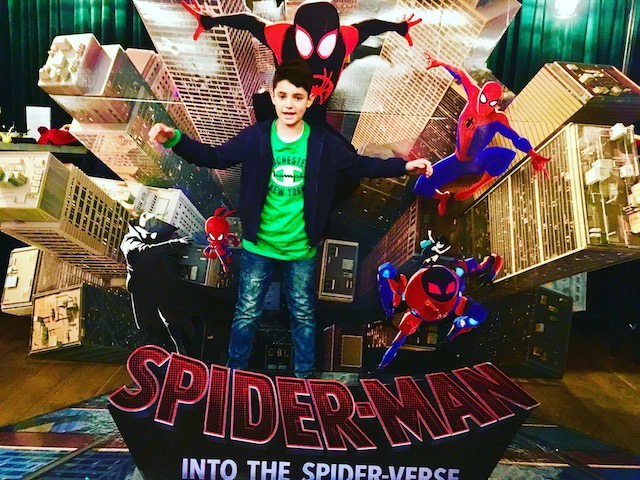 MARVEL and all related character names: © and TM 2018 MARVEL.

How to draw Comics in easy steps: Spiderman, Darth Vader and & other characters

This entry was posted on Monday, December 3rd, 2018 at 8:37 pm and is filed under Movies. You can follow any responses to this entry through the RSS 2.0 feed. Both comments and pings are currently closed.