The latest sci-fi comedy from the makers of The Nut Job, Spark is out in cinemas on 26 May. Animals assemble in this thrilling intergalactic adventure that sees a teen monkey and his gang (including a pig, a fox and a bug) take on the evil Zhong, featuring the talents of Patrick Stewart, Jessica Biel, Hilary Swank and Susan Sarandon. It’s more for kids, so parents you are warned! 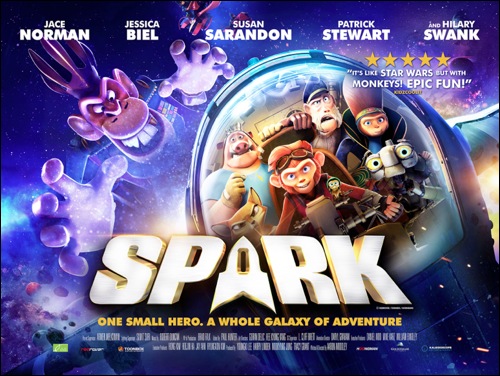 Spark: a wisecracking, teenage monkey, lives on an abandoned planet with his friends Chunk the pig, a fox called Vix, and lots of tiny bugs. Thirteen years earlier, power-hungry Zhong seized control of their planet Bana, wiping out Spark’s family and sending him into hiding. Now, Zhong plans to use the deadly space Kraken to destroy the entire universe, and only Spark and his ragtag gang can stop him. Spark must journey across the universe, in order to defeat the evil emperor Zhong and save the galaxy once and for all!

From the makers of Coraline and The Nut Job, and featuring the voices of Patrick Stewart (X-Men, Star Trek: The Next Generation) Jessica Biel (Family Guy, Planet 51) Academy Award Winners, Susan Sarandon (Cloud Atlas, Thelma & Louise) and Hilary Swank (P.S, I Love You, Million Dollar Baby), animals assemble in this intergalactic adventure that kid will go ape for!

Young fans of Kung Fu Panda, The Secret Life of Pets, Minions and Despicable Me will enjoy this animation and so did the children of the London Mums’ Kids’ Club. Spark is a lovely monkey, who becomes a new animated hero for the 21st century with a sense of humour. Spark certainly brings 90 minutes of sheer sci-fi pleasure with hilarious, inventive and heart- warming scenes aimed primarily at children. Parents will find it hard to engage with this animation unlike highly engaging Despicable Me, but more like the Minions. Be prepared when taking the kids to the cinema… I have warned you! 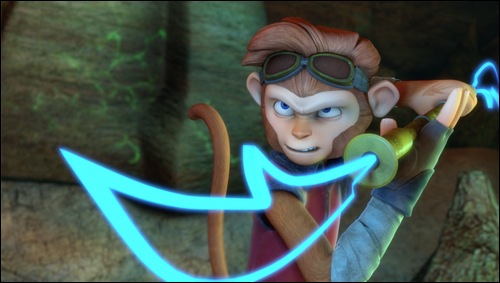 Nevertheless Spark is a beautifully animated, action packed movie from the makers of The Nut Job, which I have personally enjoyed. There are some great gags and memorable characters to keep you awake for a bit (not for the whole film though).

The voices of the characters are so familiar and you will be wondering who they are during film. I’ll be helping you figure it out. The magnificent line-up of voice talent includes Hollywood superstars Patrick Stewart (outstanding as the cranky Scottish Captain), Jessica Biel, and Oscar winners Hilary Swank and Susan Sarandon; Rob deLeeuw (Turbo Kid) stealing the show as Chunk, and Alan C Peterson being wonderfully diabolical as Zhong. Jace Norman, who plays the lead in the TV show Henry Danger, voices the mischievous monkey Spark.

This entry was posted on Saturday, May 13th, 2017 at 1:31 pm and is filed under Movies. You can follow any responses to this entry through the RSS 2.0 feed. Both comments and pings are currently closed.