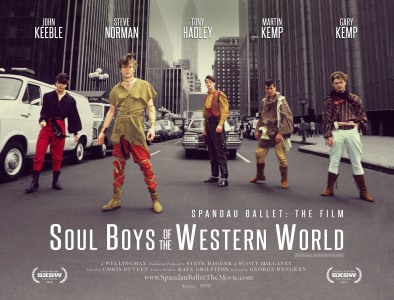 Put simply, it’s the story of Spandau Ballet. It starts with a group of boys who grew up together in Islington, (nearly) all went to the same school, got on well and just wanted to make music.  Their rise in the 80s was meteoric, with a first appearance on Top Of The Pops was when Martin Kemp was just 18.  He was just 23 when they had both the number one single and number one album.  The later years were less euphoric: despite continuing to sell millions of records, things weren’t so great behind the scenes, culminating with a break-up and a much-publicised court case.

In terms of the music, you know what you’re going to get with Soul Boys Of The Western World.  But, while this is Spandau’s story from start to finish – or, at least, the present day – it’s also a striking piece of social history.  As we watch the boys grow up and form their band, it’s all done to the background of news footage they would have seen and the music they would have heard.  Fortunately, their families took lots of photographs and, later, home videos, adding an essential personal touch.

The band’s career in the 80s is shown in parallel with the politics of the day – the rise of Margaret Thatcher, the miners’ strike and all the other changes of the time. The territory isn’t dissimilar to that of Pride just a few weeks ago, but here the New Romantic style with its flamboyant clothes and heavy make-up is in vivid contrast to the striking communities. 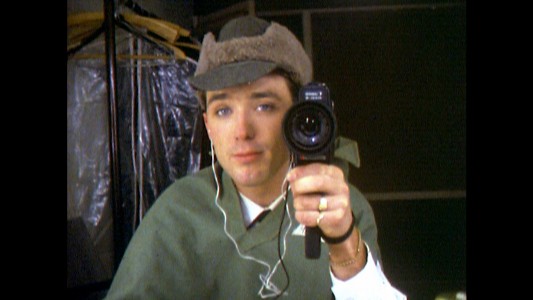 The band all share the narration and, to make sure we know who’s speaking, there’s always a caption. It’s a help because, in all honesty, Martin Kemp’s TV appearances mean his voice is easily the most recognisable.  And, as a way of telling the story, it works well, making the audience feel they’re getting closer to the real story behind the music, make-up and clothes.

There’s other familiar faces on the screen as well, but their much younger versions – an almost svelte Danny Baker, Robert Elms, DJ Mike Read and even Bob Geldof at the time of Band Aid and Live Aid. All high-profile at the time and all involved in the band’s story.  And director George Hencken doesn’t fight shy of showing the footage of Geldof challenging Mrs Thatcher about the VAT charged on the Band Aid single – or showing his unconvinced expression when he hears her answer! 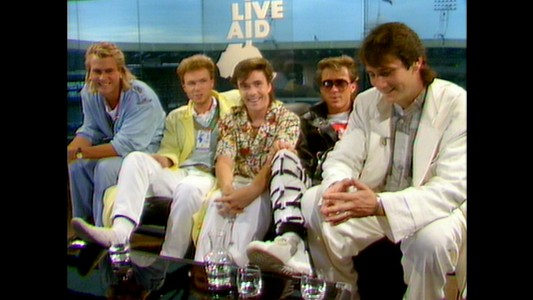 Mums’ rating: 8/10    Spandau fans will love this! And so will any other music fan.  The infectious mix of nostalgia and music is bound to have them rocking in the aisles, not just at the premiere but once the film’s more widely released.  As a documentary, it cleverly balances the story of Spandau Ballet with events in Britain at the time, making sharp contrasts and drawing intelligent parallels.  Ultimately, it’s a large slice of nostalgia and it’s impossible not to enjoy it – whether you’re an 80s girl or not!

Preview screenings of Soul Boys Of The Western World, certificate 12A, are in cinemas on Tuesday, 30 September 2014, including a simultaneous broadcast of the Spandau Ballet concert from The Royal Albert Hall.  For tickets, go to www.spandauballetthemovie.com.  The film goes on general release on Friday, 3 October.

Exclusive interviews with the Spandau Ballet at the Royal Albert Hall

Tags:  Band Aid Bob Geldof Danny Baker Live Aid Margaret Thatcher Martin Kemp Mike Read Pride Robert Elms Soul Boys Of The Western World Spandau Ballet
This entry was posted on Saturday, September 27th, 2014 at 10:00 am and is filed under Movies. You can follow any responses to this entry through the RSS 2.0 feed. Both comments and pings are currently closed.