Sometimes Always Never is a surreal, bittersweet tale of opportunities missed, lives lost and regret. Although slightly incoherent what it loses in plot it makes up for in charm. It is out in UK cinemas on 14th June 2019.

The incredibly stylish Bill Nighy is well placed to play Liverpudlian tailor, Alan, who, many years ago, got into a fight with his son over a game of Scrabble, and never saw him again – a loss he never recovered from. His other son, Peter (Sam Reilly), also never got over it, but instead of finding solace in each other they drifted apart, their relationship reduced to Birthday and Christmas cards and their shared obsession – Scrabble.

When they are both summoned to identify a body which has been found fitting the description of the missing son Alan sees it as an opportunity to maybe build a new relationship with his estranged son. What follows is a slightly surreal, and often gut-wrenching dance between the two characters, aided by a teenage grandson Jack, (Louis Healy), and a sweetly encouraging daughter in law, Sue (Alice Lowe).

The distance between father and son, is explored, rather cleverly, in the surreal, cartoon-like way the film is shot. Their first interaction is in on the way to the police station, in a prop car, with cardboard scenery shooting past. The first night they spend together is in a dimly lit bed & breakfast which looks like a stage left over from a Edinburgh Fringe show, along with a very stilted conversation with some very strange guests straight out of The League of Gentlemen. However, as the two grow closer, so to does their relationship to reality. The scenery becomes less two-dimensional, the staging becomes less like a play and more like real life, and the dialogue more and more realistic.

It is initially an odd device, as if the director Carl Hunter couldn’t decide if he was making a surreal comedy or poignant family drama, but once it becomes clear it is quite effective.

The plot of the film then wobbles, slightly unsteadily, from the story of the missing son, to Alan’s affair with Margaret (Jenny Agutter), to a coming-of-age plot featuring Alan’s grandson, Jack, who has a crush on the girl at his bus stop and, of course, Scrabble. Each element is given time to be explored, and they each get their own, moving resolution, but the film still feels slightly incoherent as each story is picked up and dropped seemingly at random. 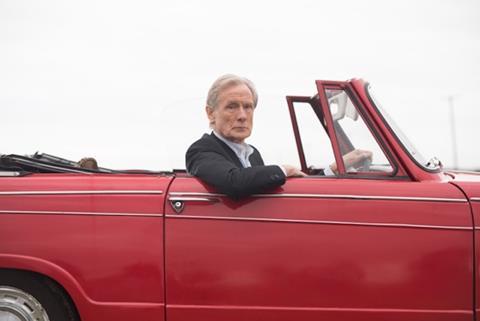 There is a concept in writing called Chekov’s Gun – this comes from advice given by the Russian playwright: “If, in the first act, you have hung a pistol on the wall, then in the following one it should be fired. Otherwise don’t put it there.” What this basically means is that if something isn’t relevant to the story, don’t distract the audience with it. If we see a gun on stage we’re going to spend the whole time expecting it to be fired. I’m not sure if anyone told script writer Frank Cottrel Boyce.

The entire film is filled with seemingly pointless detail, never fully explored. Even though the theme which ties the whole thing together is Scrabble, the title is instead a reference to Alan’s job as a tailor and how to correctly wear a 3-buttoned jacket. Also, being a tailor is such an unusual job you expect it to have some greater symbolism or relevance to the plot, but beyond teaching his grandson how to wear a suit, it doesn’t seem to. The same with the son Peter’s (Sam Reilly) job – he paints ice cream vans. The amount of times it’s mentioned you would expect it to be vital to the story, but it’s not. Nor do the characters necessarily have to be from Liverpool, as that’s not seemingly relevant to the wider story, and Bill Nighy – as great an actor as he may be – is not entirely up to the task of keeping a constant accent.

Despite being unclear about what is relevant and what is window dressing, Sometimes Always Never is very moving and very sweet. The heartbreak is nicely undercut by humour and the entire cast is charmingly brilliant. With the all the British star power involved, this film couldn’t be bad if it tried.

Despite slightly misfiring it still feels very warm, cosy and familiar; there is something comforting about a quirky, offbeat British comedy (even one which misses the mark slightly). It will while away the hours, and be as pleasant and comforting as a really nice cup of tea, but one made by a stranger; it’s not a brand you usually drink, and it’s not exactly how you’d like to make it, but that doesn’t make it bad. Unusual enough to be an interesting change, but not so different as to be unpleasant.

This entry was posted on Thursday, June 13th, 2019 at 1:08 pm and is filed under Movies. You can follow any responses to this entry through the RSS 2.0 feed. Both comments and pings are currently closed.