One of the most beloved characters from Star Wars has finally his own movie spin off. I am talking about Han Solo, smuggler, scoundrel, hero. Solo: A Star Wars Story is released in UK cinemas today. Read the verdict from our new film critic Isaac Martin and why he thinks you should watch it. 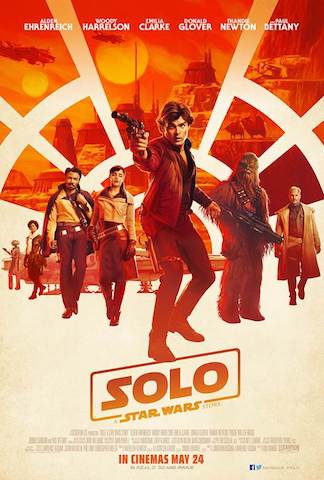 Harrison Ford is not part of this movie because the story explores the duo Han Solo – Chewie’s adventures before the events of Star Wars: A New Hope, including their early encounters with that other card-playing rogue from a galaxy far, far away, Lando Calrissian. A fresh new cast certainly shoots off to fame with a film that will make history as most Star Wars films before.

Ron Howard directs it, which only means success for the Star Wars franchise. And as big Star Wars fans we love to have another prequel in-between movies.

We can expect a series of daring escapades deep within a dark and dangerous criminal underworld, with Han Solo meeting his mighty future co-pilot and best friend Chewbacca for the first time and encountering the notorious gambler Lando Calrissian, who will hand him over the Millennium Falcon at some point. 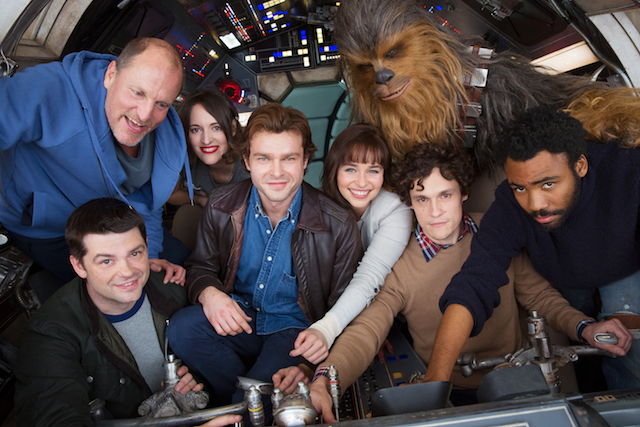 I suppose everybody was disappointed to see Han Solo die in The Force Awakens so this movie is like a consolation prize to get back our Star Wars‘ most unlikely hero and find out more about his mysterious past. 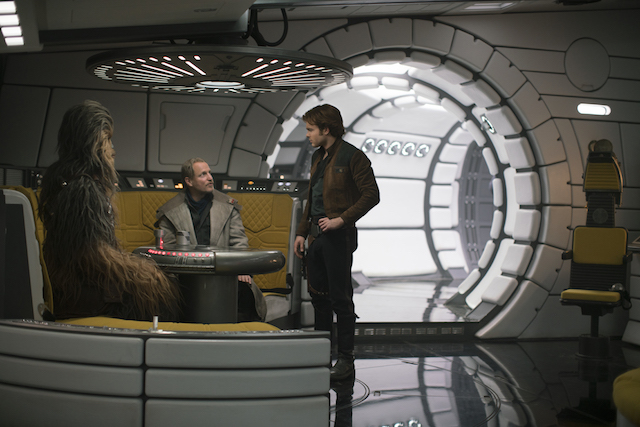 Joonas Suotamo is Chewbacca, Woody Harrelson is Beckett and Alden Ehrenreich is Han Solo in SOLO: A STAR WARS STORY.

If the Millennium Falcon was a character, it could easily be my favourite one and Han Solo is probably one of the most beloved characters from Star Wars.

The new standalone Star Wars movie (after Rogue One) with the story centred on the notorious smuggler is going to be quite strange because we will see Han Solo being played for the first time by somebody else other than Harrison Ford. 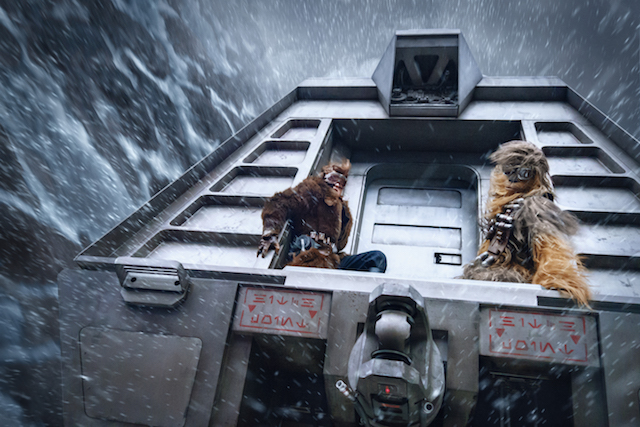 Alden Ehrenreich is Han Solo and Joonas Suotamo is Chewbacca in SOLO: A STAR WARS STORY.

The verdict by Isaac Martin

Although he has featured in four Star Wars films already Solo: A Star Wars Story introduces us to Han Solo for the first time, as well as several other characters we are already familiar with. However, the film does an incredible job of welcoming new viewers. Despite being filled with references, in-jokes and call-backs to previous films it is incredibly accessible; you don’t need to have seen another Star Wars film to enjoy this one, and it may inspire you to explore the universe more.

Alden Ehrenreich plays the titular Han Solo, and does an excellent job of channeling Harrison Ford without copying him. Ehrenreich brings a fresh-faced optimism to the character and plays a remarkably believable younger version of the more world-weary and cynical Han Solo that Harrison Ford made us all fall in love with in the original trilogy.

However, it is the ensemble cast that make this action-packed adventure so engaging and so charming. Continuing the trend of recent Star Wars films it offers a revisionist view of the universe, making sure to include plenty of representation from women and people of colour. Donald Glover is hilarious as the charming and loveable fan-favourite Lando Calrissian, and is brilliantly paired with Phoebe Waller-Bridge as his droid companion. Thandie Newton, Emelia Clarke, Woody Harrelson and Paul Bettany are all very good in their supporting roles, with Paul Bettany playing the spine-chilling villain, Dryden Vos. This film also continues the Star Wars tradition of using unknown actors in key roles, this time with a strong performance from the person behind the striking mask of Enfys Nest (but I can’t say more without giving away spoilers!).

The story remains fun throughout, as we see a string of thrilling heists tied together with an overarching plot. The political aspects will doubtless go over younger viewers heads, but this is the most fun of the recent Star Wars films, since this film stays away from the more serious and dry drama we saw in Rouge One and The Last Jedi. Instead we have plenty of excitement and humour.

The only downside is that the generation of children who will be introduced to Star Wars by this film will miss out on the mystique and excitement of meeting Han Solo and Chewbacca for the first time in Episode IV, as this film makes sure that even the throw-away references to their past from the original trilogy are given plenty of screen time here to be examined, explored and explained.

This entry was posted on Friday, May 25th, 2018 at 5:40 pm and is filed under Movies. You can follow any responses to this entry through the RSS 2.0 feed. Both comments and pings are currently closed.