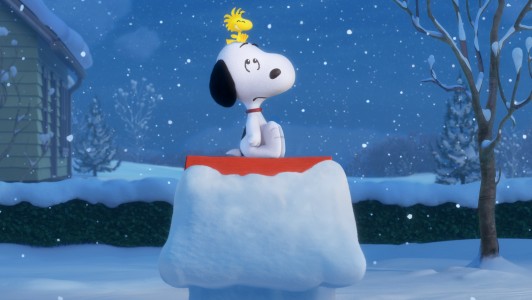 The gang’s all here! Which means we’re re-introduced to Charlie Brown and all his friends: bossy Lucy, thumb-sucking Linus, Beethoven-obsessed Schroeder, smelly Pig Pen and Peppermint Patty, who nurses a soft spot for the boy she always calls “Chuck”. And, of course, there’s his dog Snoopy, who has the most colourful fantasy life imaginable and is always there to support his shy and self-effacing master.

The story, such as it is, concentrates on Charlie Brown’s first love, the little red haired girl who joins his class at school. If only he had the courage to speak to her! There’s also a parallel story involving Snoopy fighting flying ace, The Red Baron, and rescuing the love of his life from his enemy’s evil clutches. Put simply, it’s all about overcoming your enemies, internal or external – along similar lines to The Good Dinosaur a few weeks ago.

This is a film that comes with built-in heritage and it’s very aware of it. Several generations of the Schultz family have been involved in its creation and director Steve Martino says that he worked on the movie in the very same office where Charles M Schultz drew Peanuts. We even get a look at the original, hand drawn black and white cartoons at the start and end of the film. But this is a digital animation movie, with an exceptionally clean, almost sterile, look and the freshness of those original drawings has been lost. Which may not matter to the youngsters that the film’s aimed at, but those who remember the series will miss its hand drawn style. That awareness of Peanuts history doesn’t translate to the big screen as far as the visuals are concerned.

But all the many plotlines and running gags are still there. Every single one of them. There’s Charlie Brown’s never-ending – and hopeless – efforts to fly a kite. There’s Charlie Brown falling for Lucy’s “kick the ball” trap. There’s Snoopy chasing the Red Baron, with his kennel as his plane. And a whole lot more, which is great for anybody who remembers the original. 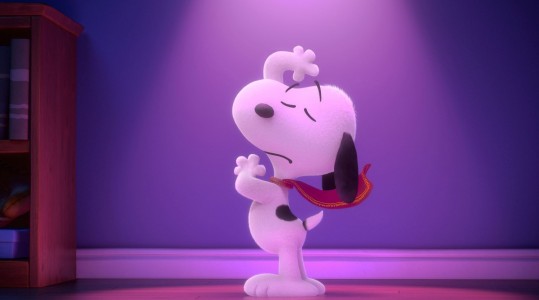 Best of all, though, is Snoopy, Charlie Brown’s faithful beagle. He’s a dog with aspirations to be a human – watch his efforts at carol singing – who rarely makes any dog-like sounds apart from the occasional howl. He has the most wonderful fantasy life: he’s a World War I ace and a writer for starters. He’s also a real scene stealer. Who else would try to teach their master to dance by doing his own version of the flamenco to the Gypsy Kings’ Bamboleo?

What’s not so great is that the film has essentially been dumbed down to appeal to a much younger audience, so that Schultz’s satirical digs, as well as his literary and philosophical references – the reason why students loved Peanuts so much – have been completely rubbed out. And that’s because the film works on the assumption that today’s children will be familiar with the cartoon to start with. It’s a flawed one, because this is quite possibly the first time that most children will have seen the characters, so they’ve no memories to draw on and won’t get the familiar gags. Parents, however, will see it from another perspective, as they’ll remember the original and the TV specials: it’ll be them dragging the children along to see it, not the other way round. 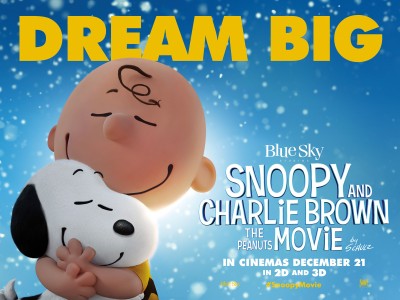 In its transition from the page and small screen to cinemas, some of the essence of the original Peanuts has been lost. The characters and the running jokes are still there, but the freshness of the drawings and the cartoon’s overall intelligence have been left behind. Children brought up on all-action superheroes might find the low-key adventures of a kindly but shy boy and his dog just a wee bit too wordy. Adults, on the other hand, will find themselves laughing and smiling, but out of recognition and familiarity rather than actual humour. And they may just find themselves wishing for the original.

Snoopy and Charlie Brown: The Peanuts Movie is released in cinemas on Monday, 21 December 2015 and will be reviewed on Talking Pictures on Christmas Eve.

Tags:  Bamboleo Charles M Schultz Charlie Brown Gypsy Kings Linus Lucy Peppermint Patty Schroeder Snoopy Snoopy And Charlie Brown: The Peanuts Movie The Good Dinosaur The Red Baron
This entry was posted on Friday, December 18th, 2015 at 12:10 pm and is filed under Movies. You can follow any responses to this entry through the RSS 2.0 feed. Both comments and pings are currently closed.