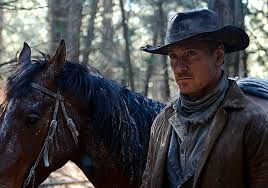 It’s Colorado in the late 19th century and young Jay (Kodi Smit-McPhee) has travelled all by himself from the Scottish Highlands to track down the love of his life. Despite his rural upbringing, he’s not making an especially good job of looking after himself so the arrival of mysterious stranger, Silas (Michael Fassbender) is timely, if not wholly welcomed by the youngster. The older man becomes his unpaid guide and bodyguard, which is just as well because there’s somebody else on their tail. And Jay can’t understand why …….

While there’s a teenager as its central character, this is very much a film for grown-ups. Superficially, it appears gentle, almost soft, but lurking just underneath the surface is the prospect of violence, betrayal and death. It never goes away and bursts out into the open suddenly and savagely. The shoot-out, which involves a vast cornfield concealing a band of gunmen, perfectly illustrates this. It looks beautiful, but what’s beneath most certainly isn’t.   Yet that apparent softness is what draws you into what is both a western and something of a coming of age story at the same time. It’s never anything short of fascinating.

It starts out as something close to picaresque tale, and a small one, but is told in an epic style, primarily as a two hander between Jay and Silas. The older man’s story slowly unfurls, whereas we know a lot about Jay from the start and some more is filled in later on. Not that Jay trusts Silas initially: he escapes from him, running into Scandinavian Werner (Andrew Robertt) who’s studying the decline of the native Americans. He seems friendly, but proves to be less trustworthy than the initially suspect Silas. 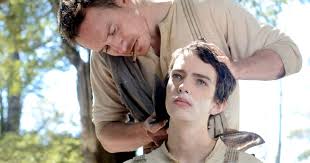 Man and boy are chalk and cheese, yet they’re two sides of the same coin. Jay has a positive view of the world, seeing the new America as a land of opportunity and preferring to think the best of people. Yet he turns out to be resourceful, which earns him a grudging respect from his guide. Silas is more cynical – he would probably use the word “realistic” – about life in general and people in particular. Not that he’s without principles, but he also knows that everybody has his price.

The first feature from John Maclean, who made his name in short films, Slow West is impressive, making its director somebody to watch for in the future. He’s assembled a strong cast, especially Michael Fassbender who is suitably enigmatic as the mysterious Silas, a loner who’s extremely perceptive about human nature and under no illusions about it. Following him and the boy is bounty hunter Payne, with Ben Mendlesohn oozing cold blooded menace in his own inimitable fashion. With two heavyweight actors for company, Kodi Smit-McPhee has a tough job on his hands to hold his own, but he does a great job and is perfectly cast as the ingénue who turns out to be more savvy than he appears. 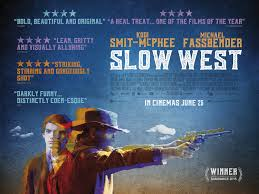 Beautiful photography – New Zealand doubles for Colorado – strong acting and engrossing storyline, Slow West is something of a treat for movie goers, western fans or not. Its enigmatic quality makes it all the more intriguing – but there’s one thing that’s never revealed. The meaning of the title. How it connects with the film is a mystery. Not that it will prevent you from enjoying it, but it would be nice to know ……

Slow West, certificate 15, is released in cinemas nationwide on Friday, 26 June 2015. It’s also reviewed on the latest edition of the Talking Pictures podcast on Thursday, when Michael Fassbender will be the subject of The Big Interview.

Tags:  Kodi Smit-McPhee Michael Fassbender Shane Slow West True Grit Western
This entry was posted on Tuesday, June 23rd, 2015 at 1:00 pm and is filed under Movies. You can follow any responses to this entry through the RSS 2.0 feed. Both comments and pings are currently closed.