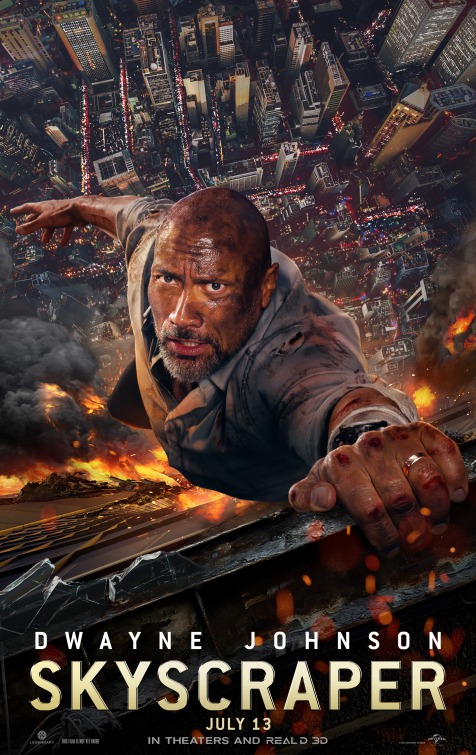 Former FBI Hostage Rescue Team leader and U.S. war veteran Will Ford now assesses security for skyscrapers. He’s on assignment in China when he finds the tallest, safest building in the world suddenly ablaze, and he’s been framed for it. A wanted man on the run, Will must find those responsible, clear his name and somehow rescue his family, which is trapped inside the building, above the fire line.

Writer/Director Rawson Marshall Thurber makes his first foray into straight action after a string of comedy hits. Unfortunately he relies on well-worn plot lines, cliched stereotypes and hackneyed dialogue to deliver a movie with such obvious plot-twists that all sense of drama is lost.

The foreshadowing in this movie is so obvious it’s a wonder Dwayne Johnson doesn’t wink directly at the audience every time something is set up. The bad guys are signposted so obviously that by the time they reveal themselves, we’re already frustrated that Dwayne Johnson hasn’t caught on yet. The main bad guy does everything possible to announce his evil-ness except twirl his moustache and laugh maniacally into the camera.

In order to appeal to as broad an audience as possible, the film is sure to include of plenty of international characters; Europe, Africa, China and America are all covered here but unfortunately it’s less about inclusiveness and representation for minorities, and more a box-ticking exercise. To appeal to the lowest common denominator, each character is reduced to and lazy and overused stereotype.

The plot, too, is contrived. We can see the end of the movie coming a mile off, but in order to fill the time until the film reaches its inevitable conclusion, every 15 minutes we are give another jolt of drama. This mostly seems to boil down to Dwayne Johnson using his pluck, wit and muscles to climb various things – but since we know that he will survive, that he will be reunited with his wife and kids and that the bad guys will get their comeuppance, the tension these scenes are supposed to build falls flat and instead we end up laughing at, instead of cheering with, our hero.

On top of this, the film keeps stopping its own action to directly explain to the audience just what is about to happen before we see it; then, once Dwayne Johnson has dramatically climbed the next thing, the movie stops again to explain exactly how we should feel about it by showing us other characters cheering, clapping or laughing. Just in case we didn’t quite follow.

What all the above means is that this movie wastes what potential it actually has. The star power of Dwayne “The Rock” Johnson, combined with a considerable budget and the acting talents of Neve Campbell, Pablo Schreiber, Noah Taylor, Chin Han and Roland Moller, all mean this movie should be a thrill-ride from beginning to end. Unfortunately, all of that drowned out by over-the-top melodrama and a paint-by-numbers plot. Its saving grace is the onscreen charm of Dwayne Johnson, and – as big as he might be – he’s not strong enough to carry this movie alone.

All that being said, these types of blockbusters are successful for a reason and this is no exception; it is a lot of fun and whilst the adults in the audience might be laughing at it, the kids in the audience will be laughing with it as they get swept up in the film’s relentless explosions, one-liners, dramatic camera angles and genuinely impressive CGI.

With the film really making sure to hammer the plot home by reminding the audience every 10 minutes what’s going on, it is simple enough for even the most distractible of kids to sit through, and with Dwayne Johnson as the lead you know it has a family friendly seal of approval (except for the F-word being used once).

Is it worth the price of admission, plus popcorn, plus drinks? No. You will have forgotten it by the time you get home. But since England didn’t make it to the final this weekend, it’s something to distract the kids with whilst you appreciate the AC and try to come up with six weeks’ worth of things to keep them occupied with over the summer holiday. Then, when you get home, you can show them where this movie stole all of its ideas from: Indiana Jones; Mission Impossible; Casino Royale; Die Hard; the first Transformers movie; Towering Inferno. That will keep them busy for a while.

This entry was posted on Thursday, July 12th, 2018 at 11:19 am and is filed under Movies. You can follow any responses to this entry through the RSS 2.0 feed. Both comments and pings are currently closed.