Show Dogs is a dogtastic and pawsome detective comedy with talking dogs. A great film to watch during school holidays. Show Dogs is out in UK cinemas today. 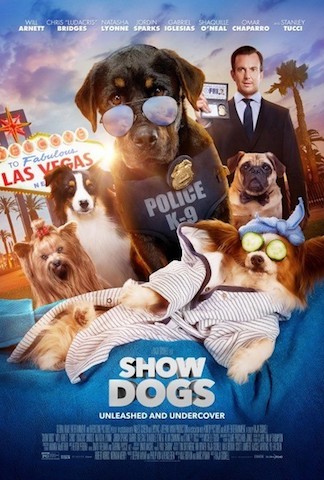 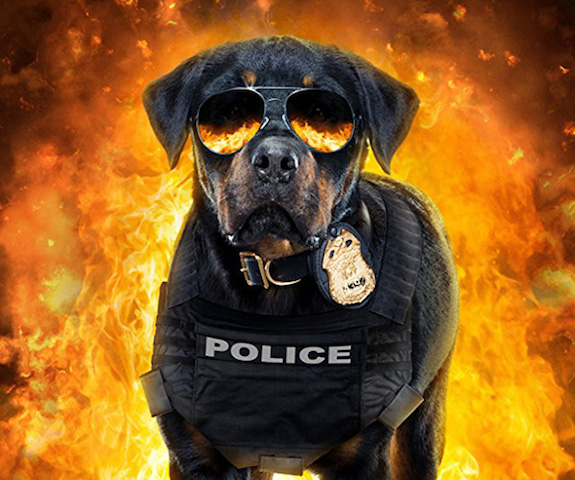 However, Max manages to corner one of the henchmen who tell of his ring-leader’s plan to sell the panda at the Canini Invitational event in Las Vegas.  This prestigious dog show attracts the richest people in the animal world and the “Best In Show” is worth millions.

Frank takes the assignment but in order to gain access to the coveted event, he must pose as a contestant with a dog.  Max, who happens to be a purebred Rottweiler, jumps at the opportunity to take down the evil gang. 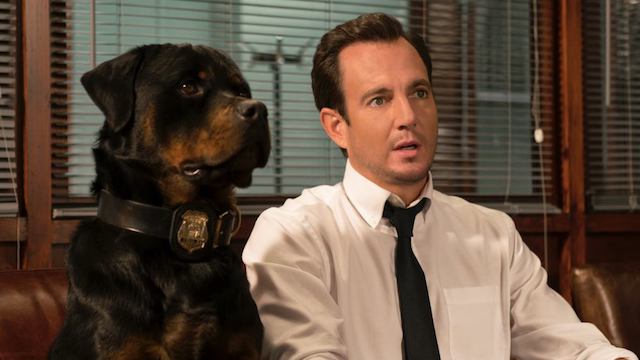 Trouble is- Frank is convinced Max has anger issues, Max thinks Frank is stupid and both are entirely clueless about the glamorous world of show dogs.

On arrival in Vegas, Frank makes contact with the FBI’s special canine consultant Mattie Smith, a professional dog handler and groomer.   Meanwhile, Max tracks down and enlists the help of an old French Papillion by the name of Philippe, once a celebrated show champion.  Philippe agrees to tutor Max and vows to turn this smelly street dog into a “Best In Show” contestant.

First stop is the dazzling Canini Invitational opening party, where Max meets and gets the low down from the other dogs in the show including Daisy, a beautiful Australian Shepherd handled by Mattie; Sprinkles, an excitable chubby pug; Karma, a zen Komondor and Dante, a fancy Yorkshire terrier.

The following day, training begins and Max, the alpha male, has to endure a full body foil wrap, seaweed mud mask, bubble bath and even a bikini wax.  If they fail to be accepted into the competition, Frank and Max will be sent back to New York and Ling-Li will be lost forever.

Respect and trust in one another grows when Frank and Max make it through and proceed to use any and all means necessary to win their way up the ranks.  However, as the final round approaches they realize that whoever wins will become the most valuable canine in the world.  The smugglers plan to steal the prize dog so they can sell it along with Ling-Li and a host of other valuable creatures that have mysteriously gone missing.

With a little help from their new friends, Frank and Max embark on a mission to out-smart the greedy traffickers, track down Ling-Li and rescue the other kidnapped animals, including the new champion of the Annual Canini Invitational.

The film was Dogtastic and Pawsome! Children all rated it 10/10.

Finally a traditional style detective comedy full of action and adventures and with lots of references to other beloved films such as The Lady and the Tramp, Dirty Dancing, Turner and Hooch. After all who wouldn’t love humorous bad cop / good cop gags involving a FBI agent and a police dog?

Young kids will find this human-animal buddy comedy very entertaining and funny and parents will also enjoy the comedic double act.
Often the best comedies are those where you don’t expect more than what the title says. Show Dogs is about talking dogs who fight crime and this is what the movie is nothing more and nothing less.

Meet the dogs and their friends 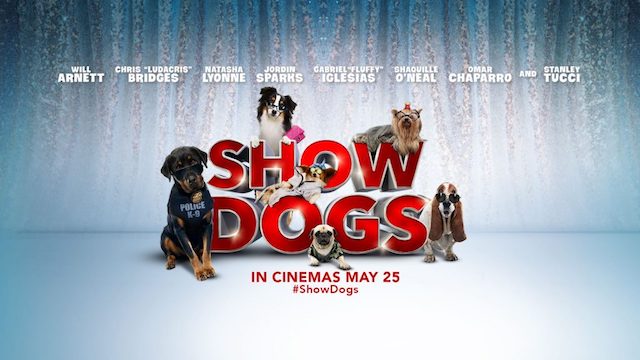 A gorgeous, perfumed and puffed Australian Shepherd who falls for Max’s charms

An aging Papillon, once known as ‘Philippe De Fabulous’ for being a three-time world champion Show Dog.  Philippe agrees to come out of retirement to help Max on his mission to enter and win the Canini Invitational.

A big dreadlocked Komondor with a chilled out Buddhist attitude.

Dante is a multi-award winning show dog Yorkshire Terrier.  He is super cute and rather arrogant!

The Pigeons are Max’s eyes and ears in the sky with some witty one liners as well!

SHOW DOGS filmed at Pinewood Studio Wales and some interesting locations in and around Cardiff.  It also filmed on location in Las Vegas.

The opening of the film sees Max spotting the smugglers arriving at NYC North Cove Marina.  These scenes were shot at Alexandra Dock in Newport.

The Alexandra Dock was opened in 1875.  It was further extended southwards with the addition of the South Dock, which in time assumed the original dock’s name.

During construction of the South Dock in 1909, disaster struck when supporting timbers in an excavation trench collapsed and buried 46 workers.  The rescuers included 12-year-old paper boy Thomas ‘Toya’ Lewis who was small enough to crawl into the collapsed trench.  Lewis worked for two hours with hammer and chisel in an attempt to free one of those trapped enabling him to be released the next day.  Several hundred pounds was later raised through public subscription in gratitude for the boy’s efforts, and he was sent on an engineering scholarship to Scotland.  Lewis was awarded the Albert Medal for Lifesaving by King Edward VII.  Today, you can find a Wetherspoons pub in the city center called “The Tom Toya Lewis,” named in honor of the young hero.

Several scenes were filmed at The Depot, Construction House in Cardiff.  Most notable amongst these was the Las Vegas warehouse pool party, the dilapidated magician’s warehouse, and the TV news studio.

From first opening the shutters in November 2015, DEPOT has since established itself as Cardiff’s most exciting and original venue, and the home of the city’s most creative events.  Situated in a 24,000 sq ft former warehouse, DEPOT was the first to offer the people of Cardiff a permanent indoor street food venue. The weekly Street Food Social now runs every Saturday all year round. From launching a secret speakeasy pop-up, to hosting Wales’s first independent beer festival, DEPOT continues to evolve, bringing new and original events to the city.

Scenes in the back stage grooming area of the dog show were filmed at Cardiff City Stadium.

The Cardiff City Stadiumis a football stadium in the Leckwith area of Cardiff.  It is the home of Cardiff City Football Club and the Wales national football team.  Following expansion in 2014; the stadium now officially holds 33,280 supporters.  After the Millennium Stadium, it is the second largest stadium in Cardiff and in Wales.

The scenes at the NYPD police station where FBI Chief tells Frank he needs to go undercover as a contestant at the dog show were filmed at Cory Building in Cardiff.

Cory’s Building is a 5 story grade II listed building situated at the corner of Bute Place and Bute Street. It was built in 1889 and it was built for Cory Brothers & Co. Ltd.

The brothers were John Cory (1828–1910) and Richard Cory (1830–1914). The business included ship’s chandlery, brokerage and the sale and export of coal. The company also owned several collieries in Wales. The brothers also became the largest private wagon-owners in the United Kingdom, with over 5,000 wagons.

Today, the building is seeking planning permission to become part of a large commercial development called Merchant Place and will be renamed Cory Chambers.

On their quest to rescue the panda, Frank follows the smugglers to an aircraft hanger.  These scenes were filmed a million miles away from the warmth of Vegas at a hanger belonging to RAF St Athan, South Wales.

Pinewood Studio Wales served as the production headquarters and the location for a number of set builds including the main stage arena, dog pound, Las Vegas rooftop party and all of the green screen shots.

Pinewood Studio Wales was announced in February 2014, after negotiations between Pinewood Group and the Welsh government resulted in an agreement for Pinewood to rent the site of the former Wentloog Environmental Centre in the suburb of St Mellons in northeast Cardiff.  Construction began in the second half of 2014, and the studio opened in January 2015.

Since then it has housed several film and television productions including the forth series of the BBC drama “Sherlock” and the historical television series “The Bastard Executioner.”

The film crew travelled to the United States for nine days covering exterior scenes on the iconic streets of Las Vegas and the party scenes that take palace in Caesar’s Palace Pool Bar.

Situated on the west side of the Las Vegas Strip, Caesars is one of the most prestigious casino hotels in the world and is one of Las Vegas’s largest and best known landmarks.  Caesars Palace was established in 1966 by Jay Sarno who sought to create an opulent experience that gave guests a sense of life during the Roman Empire.  The hotel is closely associated with the entertainment industry.  Notable entertainers who have performed at Caesars include Frank Sinatra, Sammy Davis Jr., Dean Martin, Rod Steward, Celine Dion, Cher, Elton John, Liza Minnelli, Diana Ross and many more.

A Chow puppy doubled for the baby panda in the movie

Opposite to her character in SHOW DOGS, the dog playing Daisy is a tom boy and hated any kind of grooming or pampering

40 dogs were on set for the Vegas Pool party scene

The benefits of pets for children

This entry was posted on Friday, May 25th, 2018 at 12:55 pm and is filed under Movies. You can follow any responses to this entry through the RSS 2.0 feed. Both comments and pings are currently closed.