See How They Run is a playful murder mystery with deliciously smart humour set against the backdrop of arguably the world’s most famous murder mystery, The Mousetrap, in London’s West End.

Running for 68 years, The Mousetrap stood out. Producer Damian Jones (The Iron Lady, Lady In The Van, Absolutely Fabulous) looked and researched the rights and then discovered why it had never been made into a film. A very successful Oscar winning producer at the time, John Woolf, who produced The African Queen, Day of the Jackal, and Olivier!, optioned the rights. There was one clause in the contract which said, ‘you can make the movie six months after the play closes’, and of course, it never closed. 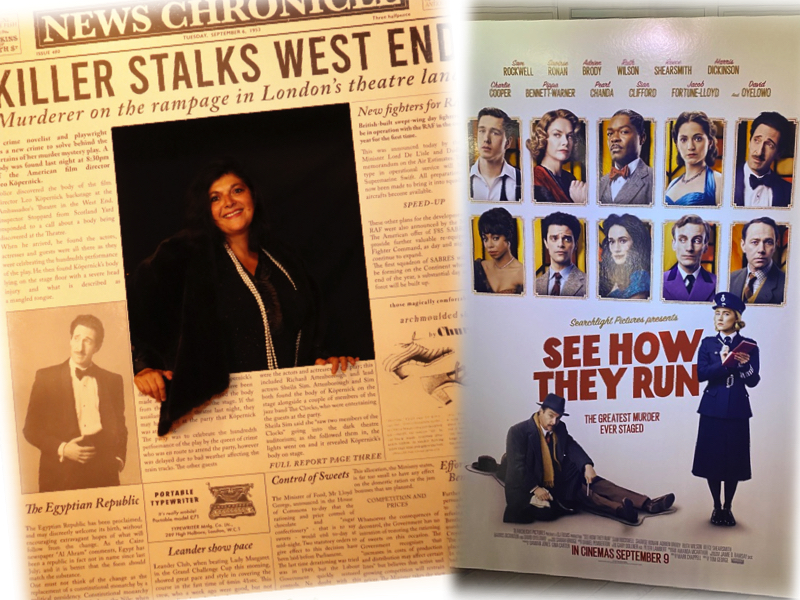 In the West End of 1950s London, plans for a movie version of a smash-hit play come to an abrupt halt after the film’s Hollywood director is murdered. When world-weary Inspector Stoppard (Sam Rockwell) and eager rookie Constable Stalker (Saoirse Ronan) take on the case, the two find themselves thrown into a puzzling whodunit within the glamorously sordid theatre underground, investigating the mysterious homicide at their own peril.

theatreSee How They Run is set during the celebration of the play’s 100th performance of The Mousetrap and while the mood is postwar, pre-sexual revolution Britain, the artists behind the camera took a playful approach to the representation of those middle ages of the 20th Century: the 1950’s.

The look and feel is the mood of 1953 with the addition of more colour. This also carried through to the automobiles especially detective Stoppard’s car, a shiny light blue Anglia, which is rounded as well.

See How They Run has the typical structure of the mystery murder genre: a dead body within the first 10 minutes, a detective with his clumsy assistant, and a group of well-defined suspects.

Adrien Brody is wonderful at playing the arrogant Hollywood film director and the narrator introducing his own murder. But my favourite characters have to be Saoirse Ronan and Sam Rockwell’s duo as Constable Stalker and Inspector Stoppard, who drive everything with wit and skilled sleuthing.

Odd-couple investigative pairings appear frequently in mysteries – the crime fighters at the movie’s centre are opposites who ultimately must surmount their differences to catch the culprit.

At its heart, the story of Stoppard and Striker is one about partnership and the teamwork required to achieve something. Rockwell describes his character as “a drunk, sexist Inspector from Scotland Yard who has post-traumatic stress from the war and his wife has left him. He’s sort of a tragic, dark character in a comic arena.”

“Stoppard is pretty broken when we meet him,” says co-star Ronan. She describes her character as “very, very green, new to the job and eager, that’s really where the story begins.” The audience follows Stoppard and Stalker as they try to figure out who is running around killing people in the West End.

Over the course of their investigation, through theatres, posh hotels and country homes, the pair take a journey. Despite himself, Stoppard finds a bit of redemption, learning from his cohort.

Says Ronan, “They change each other unexpectedly, he helps her grow up a little bit, and she helps him find some of his vivacity and the energy he used to have.”

Stoppard has no intention of rolling over, and Rockwell revels in his grumpiness. “I was never old enough to do these kinds of characters until now. I think I’ve been preparing all my life to play a character like this. I’ve always been an old soul.” He recognises some of the great performances he grew up on from Walter Matthau in Bad News Bears or Richard Pryor in Bustin’ Loose. They’re classic over-the-hill characters that have this redemption arc.”

There’s a real chemistry between Inspector Stoppard and Constable Stalker and that is necessary for those roles to work  in this movie. Their funny and quirky relationship undergirds the rest of the film.

This entry was posted on Wednesday, September 7th, 2022 at 5:22 pm and is filed under Movies. You can follow any responses to this entry through the RSS 2.0 feed. Both comments and pings are currently closed.