Rosie is an intimate portrayal of a woman struggling to keep her family together. The urgently relevant subject matter of homelessness and the housing crisis is well-handled, and makes what could be an overly sentimental or political film into something relatable, human and deeply moving. 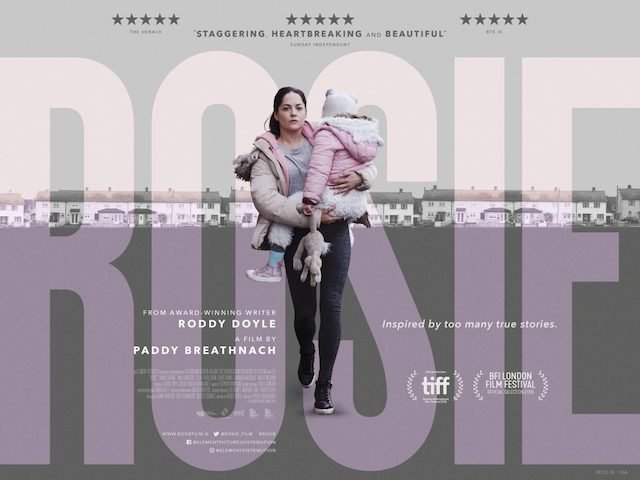 Rosie, our protagonist, is a mother of three and in a loving relationship with John Paul, her fiancé. Unfortunately for all of them their landlord decided to sell the house they had been living in for the last 7 years, and two weeks later they have still haven’t found a new place to live. This leaves Rosie ringing around hotels, desperate to find somewhere for her kids to sleep for the night, only to discover that not only are there thousands of other people in Dublin in exactly the same situation as her, but that the hotels don’t want them. On top of that, landlords have realised they can make just as much money from a couple renting a house as they can from a family of five (with far less hassle).

This leaves Rosie and her family living out of their car, which is piled high with clothes, toys, kitchenware, books, schoolwork, crockery, washing; as much as can fit. They are relying on Rosie’s friend for a washing machine and on John Paul’s brother to store their furniture. Of, course Rosie is trying to convince everyone that this is all temporary, “just until they get the new place sorted out.” That’s the same excuse we hear time and time again, until it is no longer clear whether Rosie is trying to convince everyone else that it will all be fine, or whether she’s trying to convince herself.

This unsettled feeling pours off the screen until it gets under our skin; the family isn’t homeless, they just don’t have a house right now; Rosie and John Paul aren’t married, but they are engaged; they’re not an unhappy family, but they’re in an unhappy situation. Even the children are unsettled, with the eldest only just starting at secondary school, trying to make new friends and adjusting to the dynamics of being a teenager, no longer a child, but far from grown up.

Despite all these stresses, what weighs heaviest on Rosie is her shame. We see her pride most clearly when she interacts with other women. The “understanding” teachers, her mother and her sister-in-law (both of whom have houses), the stranger who sees Rosie brushing her daughter’s teeth in a chip shop toilet, the other mothers from school – she cannot stand the way they all look at her. Even those who have as little as she does force her to feel her deepest fear: that she is a failure as a mother.

As we spend time with her as an audience we want to defend her, to tell her that she is an excellent mother. She is a good partner too, her and John Paul make a very realistic couple. Everybody in this film is very convincing, and thanks to the fly-on-the-wall style of filming (thanks to director Paddy Breathnach) and its engrossing and true-to-life script (by Roddy Doyle) it’s easy to forget it’s a film, not a documentary.

Thankfully, there are no speeches about how broken “the system” is, or about terrible the government is, no one shouts about money-grabbing landlords, there is no one blaming the economy for rising house prices or immigration. For such a sensitive issue, the film remains remarkably non-political, and at 86 minutes it doesn’t end up beating a dead horse either. The point is made effectively and powerfully and isn’t weighed down by unnecessary sentiment or political posturing.

Rosie does not want “understanding” or sympathy or pity, or even a helping hand, what she ultimately wants, and deserves, is empathy. And by the time this film is through, you would be heard-hearted not to find it in yourself to give it to her.

This entry was posted on Wednesday, February 20th, 2019 at 11:05 am and is filed under Movies. You can follow any responses to this entry through the RSS 2.0 feed. Both comments and pings are currently closed.