Roald Dahl’s Matilda the Musical tells the story of an extraordinary girl, with a vivid imagination, who dares to take a stand to change her story with miraculous results. This movie is a brand-new take on the Tony and Olivier award-winning musical. It’s released by Sony Pictures only in cinemas across the UK & Ireland from today. Releases on Netflix UK & Ireland will follow in the Summer of 2023. 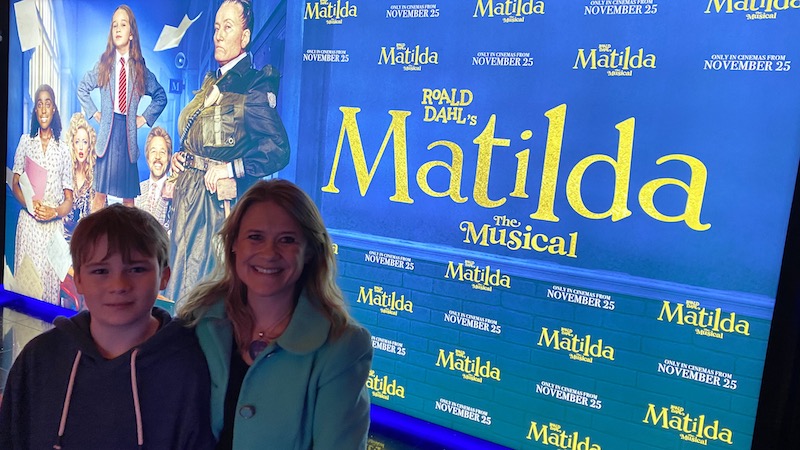 Matilda Wormwood (Alisha Weir) is a little girl with big curiosity, a sharp mind and a vivid imagination — and the worst parents in the world. While her parents (Stephen Graham and Andrea Riseborough) content themselves with trashy TV and dodgy money-making schemes, she loves to lose herself in the pages of her beloved books. Where they are loud, selfish and unkind she is a quiet observer, thinking up small and cheeky acts of rebellion and revenge.

On meeting her inspirational teacher, Miss Honey (Lashana Lynch), Matilda is encouraged and begins conjuring her own fantastical tales. Excited to attend Crunchem Hall, Matilda is surprised to find the school is an ominous and oppressive place led by the towering and villainous Miss Trunchbull (Emma Thompson).

As well as kind Miss Honey, the bright lights among the meanness are story-loving librarian, Mrs. Phelps (Sindhu Vee), and Matilda’s newfound school friends. Filled with an overwhelming sense of justice, Matilda dares to take a stand for what is right and teach Trunchbull a lesson she won’t forget.

Roald Dahl’s Matilda the Musical is an inspirational musical tale of an extraordinary girl who discovers her superpower and summons the remarkable courage, against all odds, to help others change their stories, whilst also taking charge of her own destiny. Standing up for what’s right, she’s met with miraculous results.

Matilda the musical released as a film, copying the musical score of the stage play, with Emma Thompson as Miss Trunchbull, what could be better?

The opening scene is a technicolour delight: set in hospital, we see happy parents except for those of Matilda, who are not only anti-having a baby, but insist that she is ‘a boy’.

Matilda, beautifully played by Alisha Weir, neither goes to school nor is home-schooled. She befriends a mobile librarian played by Sindhu Vee, reading book after book, until social workers send her to Crunchem Hall Primary School. It is in this setting that the wholesome Miss Honey, acted by Lashana Lynch, quickly realises that Matilda is a genius and takes her under her wing.

The musical score includes the energised songs from the theatre production such as ‘When I grow up’, ‘Revolting children’ and ‘Naughty’.  The typical Dahl-esque quirks in the narrative are beautifully dramatised on screen. For example, the headteacher swings one of the pupils by her pig tail plaits and throws her over the wall. This is a reference to her former hammer throwing championships.

The film is very colourful, with catchy tunes and clever casting. Enjoyable for all ages, this new movie version is the old Matilda film re-booted and refreshed, with a different twist. It is a wonderful thing to be transported back to childhood and Roald Dahl’s fantastical scenarios, and I came away with a big smile on my face.

Picture book of the week: My Mum Is Magnificent by Roald Dahl

Book of the week: The Gloriumptious Worlds of Roald Dahl

Picture book of the week: Never Grow Up by Roald Dahl and Quentin Blake

This entry was posted on Friday, November 25th, 2022 at 10:11 am and is filed under Movies. You can follow any responses to this entry through the RSS 2.0 feed. You can skip to the end and leave a response. Pinging is currently not allowed.