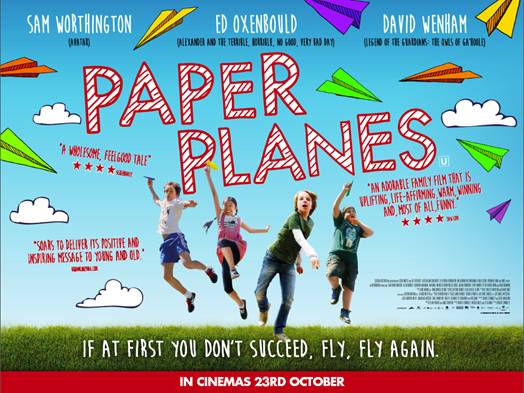 Eleven-year-old Dylan (Ed Oxenbould – Alexander and the Terrible, Horrible, No Good, Very Bad Day) is getting a hard time from a school bully, whilst his father (Sam Worthington – Avatar, Clash of the Titans) is at home grieving over the death of Dylan’s mother. When a regional paper plane tournament is announced at Dylan’s primary school, he soon discovers his natural talent for creating the ultimate paper plane. During a whirlwind adventure that takes him all the way to Japan for the world championships, Dylan meets the junior Japanese champion, Kimi, and they develop a close bond challenging each other to build the most beautiful paper plane ever made.

Inspired by his carefree ex fighter-pilot grandfather and a kite hawk he feeds on his way to school, Dylan learns that if at first you don’t succeed, fly, fly again!

Featuring an international cast including David Wenham (Lord of the Rings trilogy, Legend of the Guardians: The Owls of Ga’Hoole) and directed by one of Australia’s leading filmmakers Robert Connolly, Paper Planes is the delightful must-see movie this half-term that delivers powerful lessons in friendship, kindness and hard work.

We don’t need special effects or 3D to enjoy films. Paper Planes is the perfect example to make this point.
I loved the scene at the beginning when Dylan takes a big piece of bacon to feed a free eagle. I guess in Australia this is possible and certainly eye-opening on how healthy it is for children to play outdoor.  Paper Planes is also the journey through grieving when the mother dies and the bonding that is established between the father and the son.
I also enjoyed the sombrero time at school when the teacher collects all mobile phones from children in a Mexican looking hat before class.
This film is a journey to restore real values and simplicity away from the technology.  It is very inspirational for the modern generation of kids who think they cannot live without technology. Well, if we – as parents – cannot convey this message convincingly, the powerful images of this movie can.

A must see film for this half term. My 9 year old son Diego is a big fan of paper planes, he has always been. He loved this movie which I believe inspired him to make even bigger and powerful paper planes. Oh boy!

Paper Planes land in cinemas nationwide and on Digital HD on 23 October 2015, courtesy of Lionsgate UK.

Tags:  film film reviews
This entry was posted on Sunday, October 18th, 2015 at 7:00 pm and is filed under Movies. You can follow any responses to this entry through the RSS 2.0 feed. Both comments and pings are currently closed.