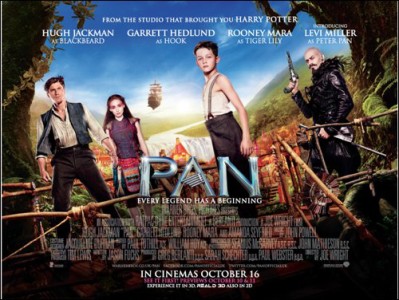 Casting directors could not have done a better job on this film as the stars include Oscar® nominee Hugh Jackman (“Les Misérables”, “The Wolverine”, “Australia”) as Blackbeard; Garrett Hedlund (“Inside Llewyn Davis”, “Country Strong”, “Tron”) as Hook; Oscar® nominee Rooney Mara (“The Girl With the Dragon Tattoo”) as Tiger Lily; Adeel Akhtar (“The Dictator”) as Smee; and newcomer Levi Miller as Peter. They are all perfect for their roles.

In this fantasy prequel, Hook (played by Garrett Hedlund) is not yet Peter Pan’s historical enemy. Instead we find him (still without a hook) as a young prisoner held at Blackbeard’s camp. He resembles more Indiana Jones than the Captain Hook we all know from previous Peter Pan’s illustrations or films. This Neverland story is more like a backstory movie to the Peter Pan’s tales we are familiar with.

Hugh Jackman plays a villainous pirate but he’s not Hook. He was born to be star as Blackbeard. Perfect choice in the casting department. This is his second villain role (the first one was in Chappie).

His character, Blackbeard, is the dreaded pirate leader who commands a flying pirate ship headed to London at night to kidnap wartime orphans (including Peter Pan) from an orphanage with the consensus of an evil nun. 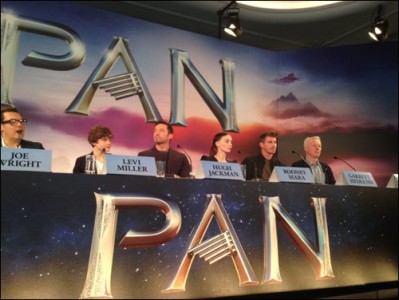 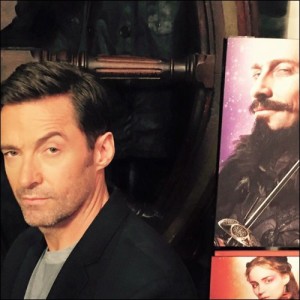 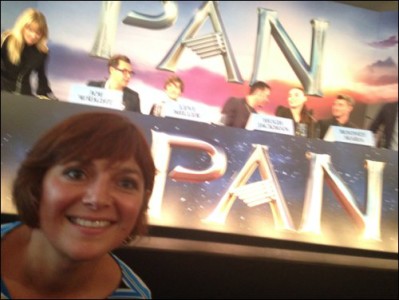 At the European press conference for Pan I managed to ask one question to Hugh Jackman: ‘You were born to be Blackbeard (I agree with your wife who thinks that Hugh / Blackbeard is the sexiest pirate ever played on screen)! The audience is left wondering what life events turned Blackbeard so nasty. Is there anything in the backstory of your character that gives some more clues? And also will there be a prequel movie about Blackbeard?‘ 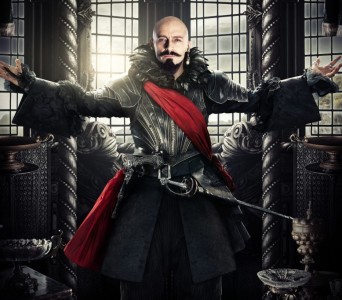 Listen from Blackbeard’s mouth what he has to say! It would be a shame not to listen the wonderful deep voice of Hugh Jackman. You can watch Hugh answering my question between minutes 20.43 and 23.06. Enjoy!

As you can see from this footage, during the press conference a great respect and lovely working atmosphere emerged among actors, actresses and the director Joe Wright (known for “Atonement” and “Pride & Prejudice”). Lots of complimentary words were said about Hugh Jackman  considered ‘the nicest guy in show business’. 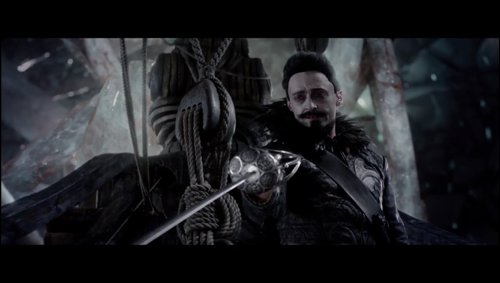 Unsurprisingly so, the chemistry between Hugh and the rest of the crowd is palpable. They all loved a bit of improvisation on set, particularly true during Blackbeard’s first appearance when all pirates and imprisoned children sing all together Nirvana’s song Smells Like Teen Spirit. It will become an iconic moment in film history.

Rooney Mara who plays Native American Tiger Lily talked about Hugh’s stamina during sword fighting scenes. She personally found those fights quite tiring and wondered how Hugh could keep up doing them tirelessly. Taking a lot of fencing classes and training for the Wolverine role certainly helped him turn into a great pirate.

Blackbeard is certainly the most extravagant pirate and villain in recent movies and at the centre of a lot of questions by the journalists. Asked what other villains inspired him in cinematic history, Hugh Jackman mentioned the Wicked Witch and Hannibal Lector.

The fact that 12 year old newcomer Levi Miller is Australian certainly played a part in creating a special bond with Hugh on set. There was great chemistry between them and Hugh treated Levi like his own son.

Offering a new take on the origin of the classic characters created by J.M. Barrie, the action adventure follows the story of an orphan who is spirited away to the magical Neverland. There, he finds both fun and dangers, and ultimately discovers his destiny—to become the hero who will be forever known as Peter Pan.

Call it the Hugh Jackman factor, the nostalgic feel of the tale, the colourful settings and special effects or the teaser campaign around this movie, but my rating might sound a bit over the top. I will give this film a top scoring of 10 out of 10 simply because PAN has all ingredients for a great fun film: original storytelling, incredible cast led by Hugh Jackman who gives his life performance (he was born to be Blackbeard), out-of-this-world special effects that keep you jumping from your seat more than once during the screening (like flying pirate ships in battles with Spitfires during WW2), and potential to have more sequels or prequels to PAN itself. I cannot wait to see what the filmmakers will do in future with the newly created original characters from PAN. 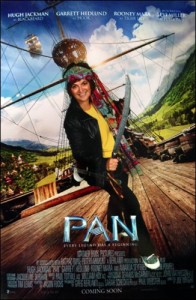 The box office success will speak for itself but I expect this group of filmmakers to get together again soon for a comeback and for potentially a prequel on Blackbeard. At least director Joe Wright seemed quite interested in that when I asked him that question. They cannot wait too long though, as Levi is growing up fast and in the flesh he looked already bigger than in the film (which was shot in 2014). What a year can make in a child’s development!

Fun around this film

I’d like to spend a few words praising the film’s promoters. Movie PR campaigns these days start really early, around a month with teaser featurettes on YouTube and social media creating such a ‘mouthwatering’ desire by the time the film is released. Most film distributors are doing it. 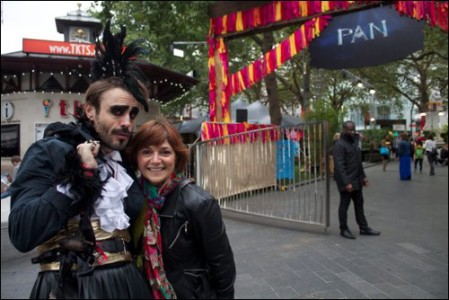 Disney is one of the best in this kind of business, so I did not expect Warner Brothers (which is behind PAN) to  impress me with such a good teaser campaign. 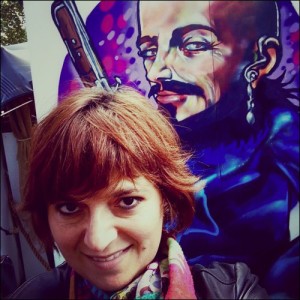 Saturday 19th September Leicester Square was transformed into Pan’s Neverland to coincide with International Talk Like A Pirate Day!

Lots of Neverlandish piratesque activities were organised for families from facepainting, photography, fairy costume designing, balloon modelling. But my favourite activity (as an amateur fencer) was most certainly the Pirate Sword fighting workshop (as you can see in the picture below). I loved having a go at sword fighting with Scottish sabres along with professional trainers. They swords were heavy and looked very much like Blackbeard’s weapons. It was a magical moment indeed and put me in the right mood to watch the film straight afterwards. 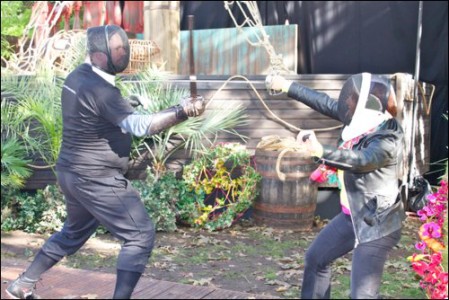 If you haven’t made it to Leicester Square, to help get you in the spirit of this adventurous movie, the PR machine has created a Pan Pirate Name Generator, which you can use to create your own pirate name and piratesque photographs. 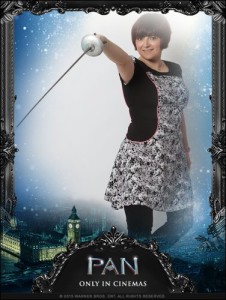 You can create yours visiting this site: piratename.panmovie.co.uk 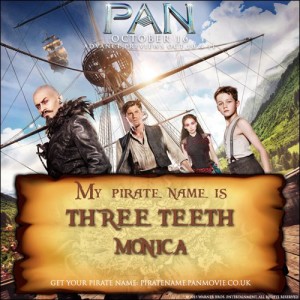 Tags:  Captain Hook family film Peter Pan
This entry was posted on Thursday, September 24th, 2015 at 11:00 am and is filed under Movies. You can follow any responses to this entry through the RSS 2.0 feed. Both comments and pings are currently closed.