Forget about special effects of blockbuster movies like King Kong or Life this Easter and watch Neruda instead. A film by Pablo Larrain about the time in the Chilean poet’s life when he was on the run for being an outspoken Communist (in 1948). Neruda is played by Luis Gnecco is bears a remarkable likeness to the poet. The detective in charge of catching him is Gael García Bernal, one of my favourite Spanish speaking actors of all times. Don’t miss it! You are in for a real treat. 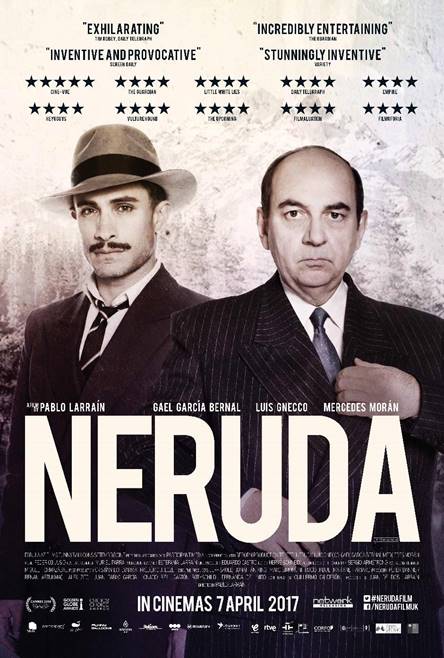 Neruda tries to flee the country with his wife, the painter Delia del Carril (Mercedes Morán), but they are forced into hiding. Inspired by the dramatic events of his new life as a fugitive, Neruda writes his epic collection of poems, Canto General. Meanwhile, in Europe, the legend of the poet hounded by the policeman grows, and artists led by Pablo Picasso clamor for Neruda’s freedom.

Neruda, however, sees this struggle with his nemesis Peluchonneau as an opportunity to reinvent himself.

He plays with the inspector, leaving clues designed to make their game of cat-and-mouse more dangerous, more intimate. In this story of a persecuted poet and his implacable adversary, Neruda recognises his own heroic possibilities: a chance to become both a symbol for liberty and a literary legend.

I had no expectations before watching Neruda but when the duo of Chilean film director Pablo Larraín and Mexican actor Gael García Bernal are involved, you know the film must be good.

I am a fan of Pablo Larraín and enjoyed both The Club and more recently Jackie with Natalie Portman (nominated as best actress at the Oscars for her portrayal of Jackie Kennedy Onassis).

His directorial style is unique: he makes slow films often characterised by meditative intermezzos, monologues and poetic narrative. Neruda is probably his best work so far although it’s not going to be mainstream like Jackie because it is in Spanish and not in English.

Gael García Bernal is exceptional as the police inspector in charge of capturing the Chilean poet. I have always loved his work since his portrayal of the young Che Guevara in The Motorcycle Diares and in Almodovar’s Y tu Mama tambien. These films are not everybody’s cup of tea, but particularly aimed at those who love both South American and Spanish culture and history. However, the cinematography and screenplays of all these movies are so brilliant that allow them to reach universal audiences. I am a big fan of the genre.

I speak fluent Spanish so I enjoyed every moment of Neruda which is a highly poetic movie and includes Neruda’s poems recited with a Chilean accent. I am also a fan of Neruda’s poetic work which also helped to fully enjoy the film.

Neruda might not be reaching the highs of Moonlight (which I personally did not like) in terms of fame because of the language barrier but is certainly a much better film based on true historical facts, a brilliant piece of literature as well as first class performances by Gael García Bernal, Luis Gnecco & Mercedes Moran.

I highly recommend Neruda and would like to watch it a few more times to truly grasp the poetic parallels. The DVD cannot be released soon enough.

This entry was posted on Sunday, April 2nd, 2017 at 11:07 am and is filed under Movies. You can follow any responses to this entry through the RSS 2.0 feed. Both comments and pings are currently closed.