Mrs Harris Goes to Paris is a PG Comedy/Drama.

This is a Franco-British love-up, for all those die-hard Francophiles out there. The fashionistas will salivate over the sacred reenactment of a 1950s Dior fashion show, with genuine outfits  including a version of the 1949 Bar Suit, which can now be seen at the V&A.

It’s also delightful. The culture clashes are delicate and charmingly resolved, the prickly Parisian is present, but outnumbered. Every character is nudged on to the next phase in their journey, even the mighty Christian Dior himself, who agrees to go off the peg and global at the insistence of our well-intentioned heroine, nicknamed ‘Madame Dior’ in Paris. 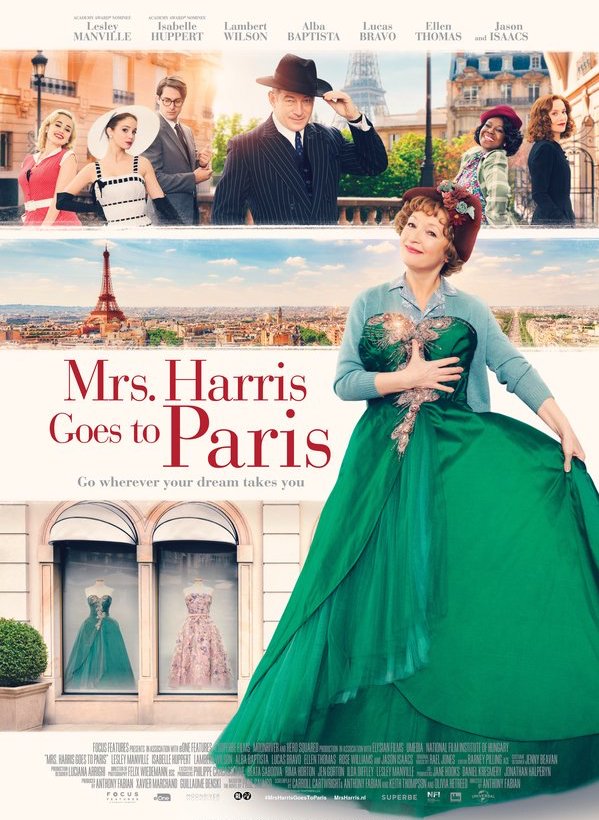 And refreshingly genuine for a bi-cultural, bi-lingual film. How often have we linguists sat through films where the Japanese role is played by a Chinese with the wrong accent and mannerisms? Am I being too picky. In Mrs H, the French roles are played by French actors, they speak French to each other naturally when the English aren’t around, or when they don’t wish to be understood, and lose their rag with reassuring frequency.  Their English accents are drop-dead romantic, just as they should be. Where we share words, the French gets through, and we see Mrs H joining the linguistic dots with a beam of satisfaction.  My only comment would be that the English included a few too many delicious idioms, delivered at speed for comic impact, which the French would not have got, given the level of the English in their script.

On a political level, the gritty reality of living in Paris is ever present in the form of a bin-man strike in full ‘ming’, an almost yearly occurrence certainly in the 1980s when I was a student there.

‘Did you find love in Paris?’ Mrs H. was asked.

Go and find out.

This entry was posted on Sunday, October 16th, 2022 at 11:32 am and is filed under Movies. You can follow any responses to this entry through the RSS 2.0 feed. Both comments and pings are currently closed.