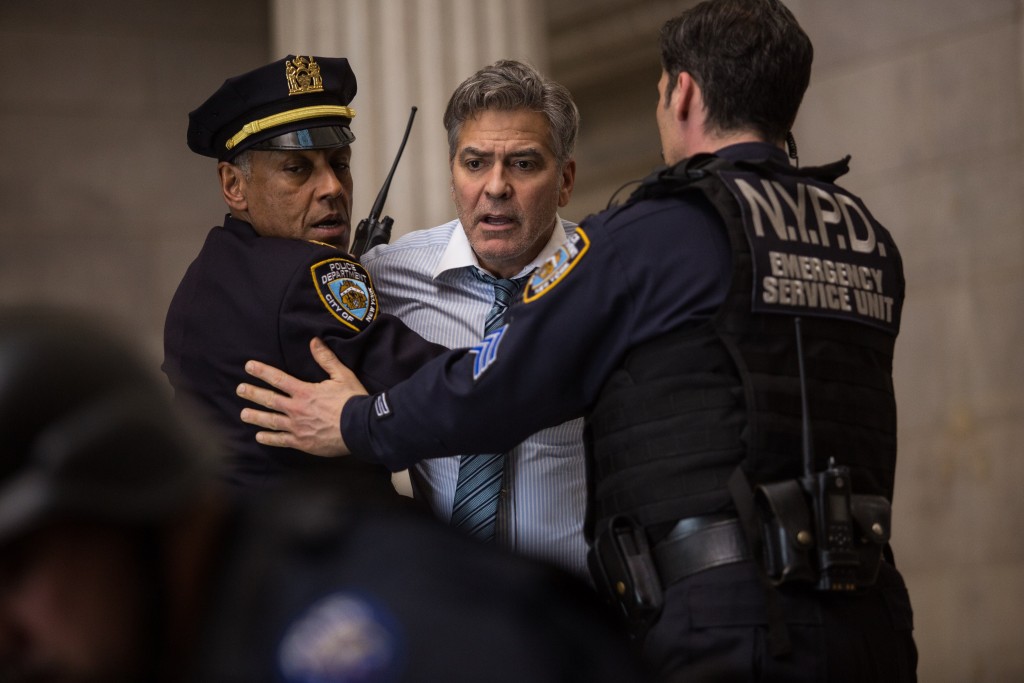 Flamboyant financial commentator Lee Gates (George Clooney) is fronting his daily TV show about the markets when a distraught investor, Kyle (Jack O’Connell) bursts into the studio and takes him hostage.  He’d followed one of Lee’s tips but the stock has plummeted and Kyle blames him for losing everything.  But why did it crash so spectacularly?  While the crisis is played out on live television, the show’s producer Patty (Julia Roberts) has to work behind the scenes to uncover the real reason why Kyle, and all the other investors, were left high and dry.

Kyle’s anger is initially directed fairly and squarely at Gates and the fact that the company he invested in keeps talking about the loss being caused by a computer “glitch”.  We hear a lot of that word.  But as it unfolds, it becomes clear that something fishy has been going on and the buck stops with the company’s front man, Walt Camby (Dominic West).  He was due to be interviewed live on the show but dropped out at short notice.  Suspicious or what?

And that’s the idea behind the thriller side of things.  It’s played out in real time, which you would expect to ramp up the tension and it does, but only up to a point.  Your knuckles stay the same colour throughout.  It’s workmanlike and has some good moments, especially when it upturns one of the big conventions of a hostage drama.   The police track down Kyle’s girlfriend, Arlene (Olivia Luccardi) and bring her to the TV station.  She’s heavily pregnant and we’re all set for an emotional plea for him to put down the gun, again going out live on air.  We get something rather different, it works perfectly but then it’s followed by a very cumbersome hint as to how the situation is likely to pan out.  And that makes the ending almost entirely predictable. 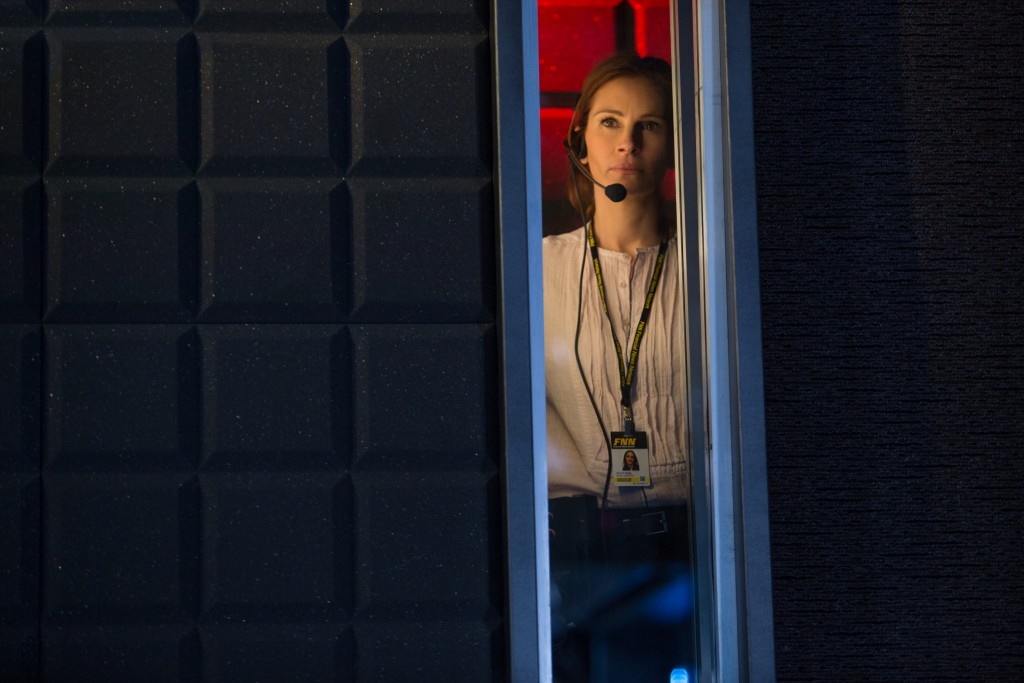 Money Monster also aims to be something of a satire, with two distinct targets – the banks and the media, specifically the media’s impact on people.  Watch the reactions of New Yorkers as the scenario is played out on TV.  They’re all glued to their screens – in the café, at work, anywhere.  It’s compulsive viewing, it’s live and it’s real.  When it comes to an end, the camera is on the people in the café.  Count to three, and the two guys who’d been playing table football beforehand re-start their game.  Within minutes, everybody’s forgotten about what actually happened and the internet is flooded with funny film clips based on one memorable moment.   It appears that the media makes us shallow ……..

High finance is the other target, especially its jargon-packed language.  Most people don’t understand it and let the so-called experts get on with it – and get away with it.  But, as Clooney points out, it’s not hard to understand at all, it’s just that the banks prefer it to be that way.  Smoke and mirrors, as it were.  But, yet again, we’re heading for a let-down because the film then cops out completely, making it disappointingly easy to work out what Camby has been up to. 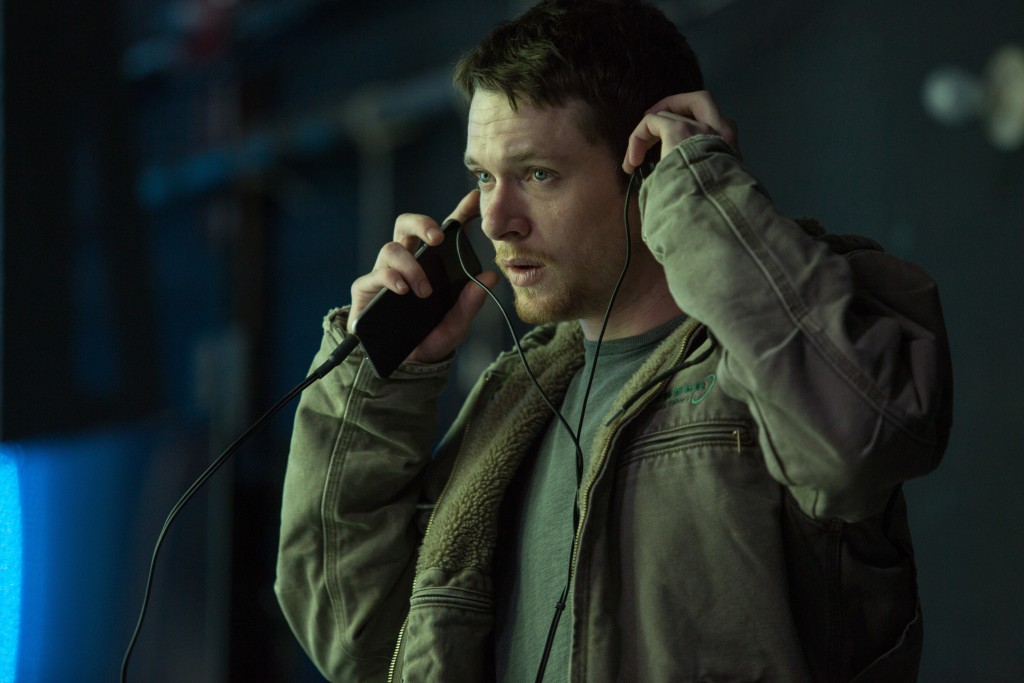 Yet, despite its less-than-accurate aim and, with a slightly old fashioned feel about it, the film holds together surprisingly well.  The cast helps.  Clooney isn’t especially stretched as the arrogant showman, but Julia Roberts impresses as his unflappable producer, exactly the sort of person you want in your corner when the chips are down.  British actor Jack O’Connell isn’t in one of his more taxing roles, but he’s effective in grabbing your sympathies.  And keep your eyes open for cameraman Lenny (Lenny Venito), the bug-eyed everyman who says little but sees all. 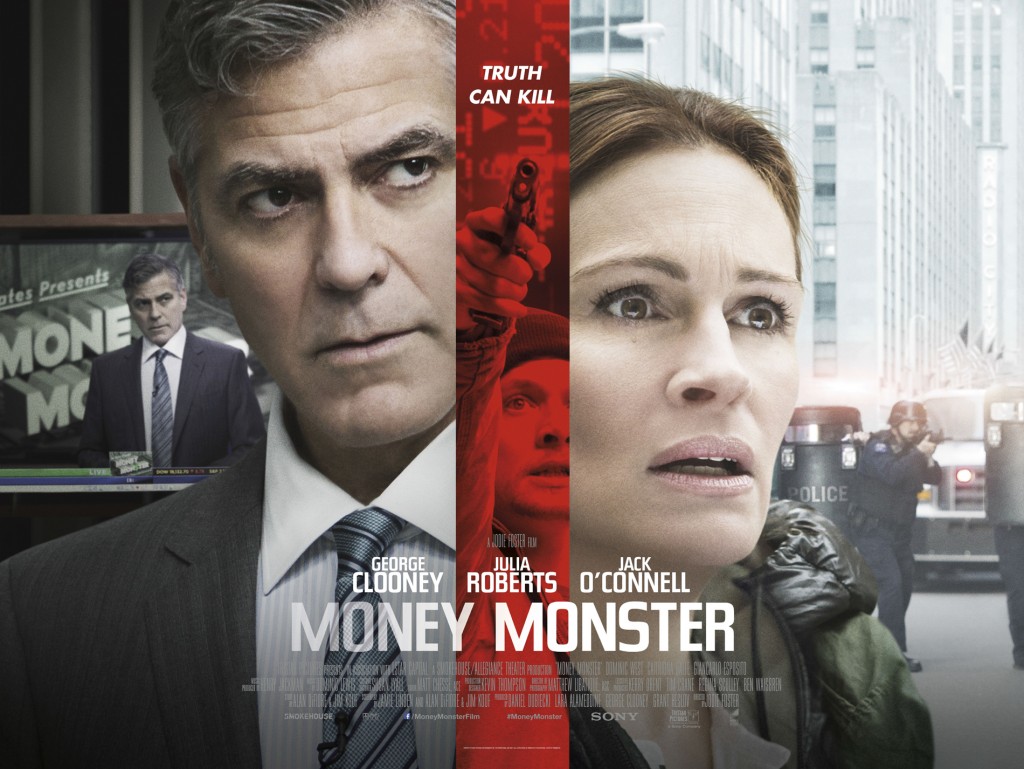 Money Monster falls just wide of the mark at every turn: as a satire it’s not sharp enough, as a thriller it’s short on thrills.  So why the audience at the Cannes Film Festival chose to give a four minute standing ovation last week will have to remain a mystery.  It’s not necessarily a bad film but, when you look at the level of talent involved – and that includes director Jodie Foster – you’re left wondering why it simply isn’t better.

Money Monster is released in cinemas on Friday, 27 May and reviewed on Talking Pictures on Thursday, 26 May 2016.

Tags:  A Hologram For The King Cannes Film Festival Dominic West Florence Foster Jenkins George Clooney Hollywood Jack O'Connell Jodie Foster Julia Roberts Meryl Streep Money Monster Tom Hanks
This entry was posted on Tuesday, May 24th, 2016 at 7:05 pm and is filed under Movies. You can follow any responses to this entry through the RSS 2.0 feed. Both comments and pings are currently closed.