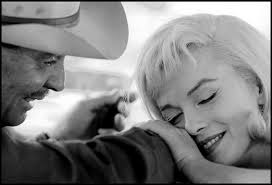 Rosalyn (Monroe) is reeling from a quickie divorce in Reno when she meets Gay (Clark Gable) and Guido (Eli Wallach), a couple of aging cowboys with a half-built house out in the wilds. She moves out there for some respite but then Guido suggests a road trip to round up some wild mustangs. They pick up some extra help in the shape of burnt-out rodeo rider, Perce (Montgomery Clift), but in the desert tensions rise as Rosalyn realises the fate of the horses and forces the men to face their outdated lifestyles and their personal failures.

The Misfits was always going to attract publicity when it was made in the early 60s. Quite apart from its stellar cast, there were a couple of heavyweights at the helm: director John Huston and writer Arthur Miller, who’d written the film for his then wife, Marilyn Monroe. That, in itself, was eye-catching enough, but then there were rumours of health problems on the set, involving Monroe herself as well as co-star Montgomery Clift. And then, just ten days after filming was completed, leading man Clark Gable died.

That’s a lot of baggage for a film, but it says much for The Misfits that it not only managed to carry it, it’s outlasted it as well. So much so that it’s now regarded as a classic of modern cinema.

Described on its release as an “anti-western”, it’s more of a bitter eulogy to the disappearing breed that was the cowboy, a romantic icon living a life free of responsibilities, drifting from job to job. A young man’s life, certainly, as Gable’s Gay now has to compromise by roping horses to sell to meat factories. Aside from that, he spends a lot of time getting drunk to blot out his guilt about the past, especially his two children. All that assumes, of course, that the cowboy life he hankers after actually existed in the first place. 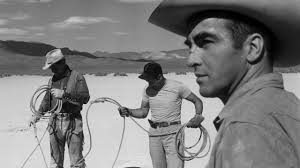 The first two thirds of the story are in the familiar Arthur Miller style, serious character studies set mainly in interiors, almost as if we’re watching a Miller play transferred to the screen. But the final third in the Arizona desert is where the action and the drama goes up a notch. This is where they hunt the horses and Rosalyn challenges the way the men live their lives. The scenes involving the horses are, frankly, distressing. At the time, the use of animals in films wasn’t regulated in any way so the angry stallion and his mares that you see on the screen were probably for real. Naïve Rosalyn may be but, faced with these scenes, you sympathise with her distress. 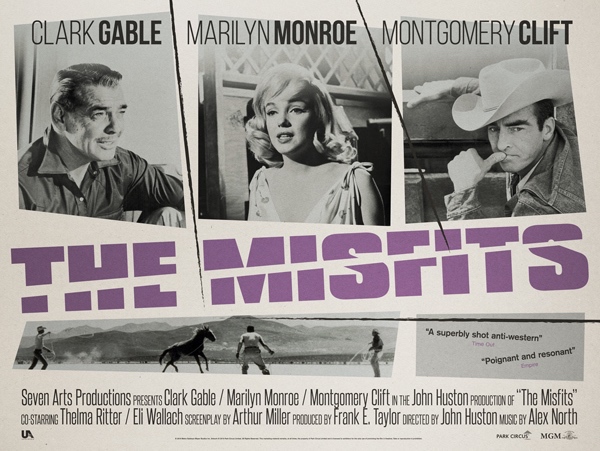 Despite the legendary difficulties while the film was being made, the result is a film that still has the power to move and to shock. Its re-release has been given a PG certificate but this is no movie for children. An adult drama about dreams and disappointment, it’s still a must-see, over half a century since its original release.

The Misfits is re-released in major cities around the UK and at the BFI on Southbank. The film is also reviewed on the latest edition of the Talking Pictures podcast.

Tags:  Arthur Miller BFI Clark Gable Eli Wallach Gentlemen Prefer Blondes John Huston Marilyn Monroe Some Like It Hot The Misfits
This entry was posted on Monday, June 15th, 2015 at 11:00 am and is filed under Movies. You can follow any responses to this entry through the RSS 2.0 feed. Both comments and pings are currently closed.