At the dawn of time, Minions were just single cell organisms but their purpose was already clear – to serve the most villainous master they could find. Over history, they followed a T-Rex, Dracula and Napoleon, among others, but years without a boss left them without a purpose. The intrepid Kevin, with help from Bob and Stuart, set out to find a new master and eventually find Scarlet Overkill (voiced by Sandra Bullock) who sends them on an important mission. To steal the Queen’s crown.

The setting is London in the Swinging 60s, so BG (Before Gru). Which means there’s a very cool soundtrack of music from that era to accompany the main part of the story. Grandparents in the audience are bound to recognise it, as will some of the older mums and dads, but it’ll be lost on the children. They won’t realise that one of the Minion’s own musical numbers is the theme from The Monkees. And their version of Make ‘Em Laugh from Singin’ In The Rain – not Sixties, admittedly – is glorious. But this is Sixties London for the American market, full of the usual English stereotypes. Everybody, of course, drinks tea: even a policeman in a patrol car comes equipped with a teapot, cup and saucer.

The sad thing is that those caricatures aren’t the only symptom of laziness in the film. The storyline is essentially a re-run of Muppets Most Wanted, only this time it’s just the Queen’s crown that’s the target instead of all of the Crown Jewels. Scarlet’s hi-tech gadgets are, by today’s standards, primitive and the whole production sniffs of having been chucked together at speed to make as much money as possible out of the franchise. And that gives it a decidedly cynical air. 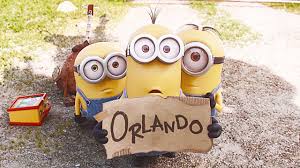 Like a failed Victoria sponge, the film sags in the middle. The start is amusing enough, showing the Minions with their different masters but once Kevin, Stuart and Bob go in search of a new boss, it starts to go downhill. Despite being given distinct characters in their own right, the three of them simply aren’t as funny as the Minions en masse. We know them too well, their actions become predictable and the potential for their usual goofs all but disappears. There are moments of inspiration – Stuart chatting up a New York fire hydrant thinking it’s a lady Minion stands repeated watching – but moments like that are too few. Thankfully, there’s a lift at the end with the appearance of a young Gru, who is soon to become their new master. He’s voiced by Steve Carell, the rest of the Minions have arrived by this point and we’re thankfully back on good ol’ Despicable Me territory. 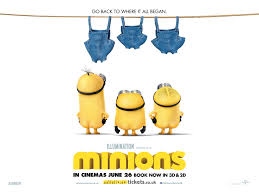 Minions has its shortcomings, but the children in the audience won’t care in the slightest. They’ll be more than happy to see their little yellow heroes hurtling around and causing chaos. The adults with them won’t be so easily pleased. What the film shows is that, even when they’re all together, the Minions simply can’t sustain an entire film on their own. They were, and should remain, Gru’s support act – and when they’re doing that, they’re terrific.

Minions is released around the UK on Friday, 26 June 2015. It’s also reviewed in this week’s edition of Talking Pictures, out this Thursday.

Tags:  Despicable Me Dracula Gru Minions MUPPETS MOST WANTED Napoleon Sandra Bullock Steve Carell The Monkees
This entry was posted on Wednesday, June 24th, 2015 at 2:13 pm and is filed under Movies. You can follow any responses to this entry through the RSS 2.0 feed. Both comments and pings are currently closed.