It had to happen.  After sending our hearts a-flutter as the brooding but brilliant Don Draper in Mad Men, Jon Hamm has made his move from Madison Avenue to the big screen.  But instead of going for something serious and dramatic, he’s done a complete about turn and taken the lead in family baseball drama, Million Dollar Arm, from one of the world’s biggest studios, Disney.  Does he score a home run?

Things are looking grim for sports agent J B Bernstein (Hamm).  He’s lost his biggest client, his business is teetering on the brink of folding and he needs to find a way out.  He comes up with the idea of searching for a new baseball pitcher but taking his search all the way to cricket-mad India, where they’re likely to have the throwing skills.  And to find that new talent, he decides to stage a Britain’s Got Talent style contest, with the two winners being given the chance to try out for Major League Baseball teams. There’s just one hitch: his backer gives him one year to deliver.

Apart from moving the action to India, we’re on familiar Disney territory with Million Dollar Arm.  In a film that’s more than a little Slumdog Meets Disney, the studio sticks to its tried and tested family film formula.  So it’s all about battling against the odds, believing in yourself and coming out on top.  It’s updated with modern technology like Skype and mobile phones but, underneath, it’s still a very traditional Disney flick.

Based on a true story, it’s a warm hearted and nicely made movie, but you can see how the story is going to unfold a mile off.  The only semblance of something different is the Indian setting, but even that’s cleaned up with the slums seen just from a distance and the realities of the country glossed over – apart from the obvious references to cumbersome bureaucracy.

Hamm delivers a likeable performance as JB, with his effortless charm carrying the film.  In truth, it would be rather flat without it.  Lake Bell plays his tenant and it’s more than a little obvious that romance is on the cards right from the start, despite his preference for glamorous models.  The two of them make an appealing couple. 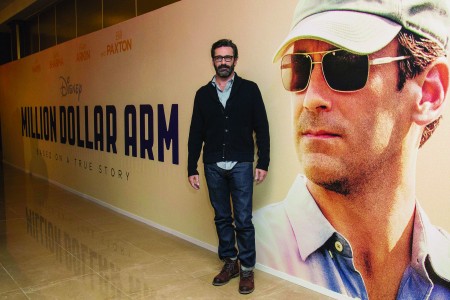 Mums’ rating:  6/10  Million Dollar Arm is a typical piece of Disney family fodder – well made, uplifting and squeaky clean.  And there’s nothing wrong with that.  But the disappointment is that, despite the change of setting and the true story at its heart, there’s nothing new underneath.

Million Dollar Arm, certificate PG, is released around the UK on Friday, 29 August.

This entry was posted on Tuesday, August 26th, 2014 at 12:00 pm and is filed under Movies. You can follow any responses to this entry through the RSS 2.0 feed. Both comments and pings are currently closed.