The second half of this year has seen the arrival of a new genre at the cinema. The Y A movie.  Translated, this means films aimed at Young Adults, and they’ve all been based on successful books written for the same audience. The Fault In Our Stars, Divergent, If I Stay and, most recently, The Giver, are the most recent and some of them have been big hits at the box office, The Fault In Our Stars especially.

The latest one, The Maze Runner, arrives this Friday.  Having already made it to the top of the American box office, it looks like doing well over here – and plans for part two of the trilogy have already been well-publicised.  So is it just a prequel or does it bring something new to the Y A party? 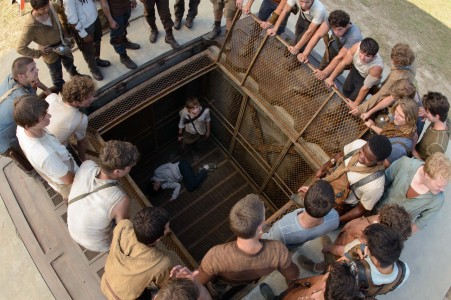 Teenager Thomas arrives, via a rudimentary express lift, in The Glade. His memory’s gone so he can’t remember his name – that turns out to be only temporary – and has no memories of the past, apart from the occasional scrambled dream. The Glade is a large field with trees, surrounded by what appears to be a giant concrete wall.  This, however, is the outside of The Maze, which opens every day at sunrise and closes at sundown.

None of the other boys in The Glade know how they got there either. A select band, known as maze runners, has ventured inside The Maze to find a way out and have managed to map parts of the interior, but it changes every day.  They’ve also discovered there are monsters – they call them Grievers – inhabiting The Maze so nobody spending a night in there has ever come out alive.  But Thomas is determined not just to find a way through The Maze.  He wants to know why he and the others are there – and who, or what, is behind it all.

Thomas is most definitely right. There is something or somebody behind it.  You get the distinct sense of the boys being toyed with like pieces on a chess board and, after all, a monolith like The Maze isn’t going to move at will, is it?  And a lot of the film is spent piecing together how the teenagers got there in the first place.  The fact that they’re all boys until half way through the movie initially puts you in mind of The Lord Of The Flies, but this isn’t in the same league, both in terms of the story or the characters.  In a feeble token gesture to redress the balance, a girl is introduced into the group in the second half of the film but she has very little to do and is, ultimately, surplus to requirements.

A word of warning. If you have a problem with spiders, you won’t want to see this.  The Grievers turn out to be surprisingly agile robotic giant spiders, with fleshy bodies and Meccano limbs, including a scorpion-like tail with a claw at the tip straight from a grab-a-prize seaside game.  Need I say more?

Once the audience is allowed inside The Maze, it looks disappointingly bland – all lofty, blank walls and lots of ivy. An aerial view at an early stage would have given a clearer view of the shape, but there’s only a glimpse because it would give the game away, so the mystery preserved.  As the film moves towards its climax, The Maze starts to look increasingly stagey and less impressive, perhaps because it simply becomes the backdrop for the showdown with the Grievers.  That is fast and frenzied – so fast, sometimes, that there are moments when you can’t actually work out what’s happening on the screen. 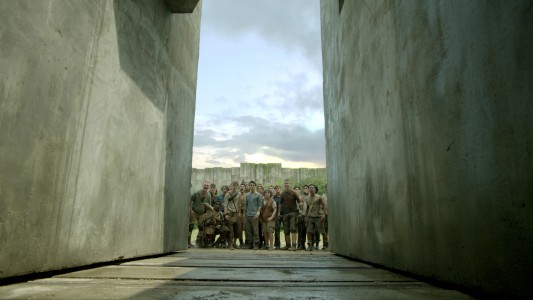 Mums’ rating: 6/10  The Maze Runner is very much for its teenage target audience. The storyline is straightforward, without the complexity of a sub-plot, and the characters also tend to think in straight lines.  Add to this a goodly helping of action of near-bloodless variety and strong sense of mystery and it’s a safe choice for the older children in the family.  For adults?  You’ll get the distinct feeling that you’ve seen it all before – and, as you’ve seen more movies than most teenagers, you probably have!

The Maze Runner, certificate 12A, is released nationwide on Friday, 10 October 2014.

Tags:  The Maze Runner
This entry was posted on Monday, October 6th, 2014 at 7:15 pm and is filed under Movies. You can follow any responses to this entry through the RSS 2.0 feed. Both comments and pings are currently closed.