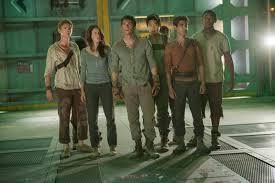 Picking up precisely where The Maze Runner left off, Thomas (Dylan O’Brien) and the other Gladers have made their way through the Maze and are now in the care of WCKD, headed by Doctor Paige (Patricia Clarkson). They’re all immune from the deadly Flare virus but, after witnessing some of the attempts to find a cure, they escape. Out in the Scorch, a massive dessert, they go in search of rebel organisation, The Right Arm, but have numerous obstacles to overcome before they get there – and that includes the military might of WCKD.

If you saw the first Maze Runner, or you’re familiar with the books, then you start off with an advantage. You’ll know what’s happening. But if you’re a newbie, you’ll spend half of the film wondering what’s going on, because there’s little or nothing in the way of gap fillers to help. And that means this isn’t a film that stands up on its own.

So, assuming you understand what’s going on, what do you get? Certainly, something with a much bigger landscape than its predecessor. There’s a massive desert, with all the dangers that go with it, as well as a ruined city, which looks pretty much like any other post-dystopian remnant. In other words, more and bigger places to run in. Because there’s an awful lot of running. Every time the plot shows signs of sagging, along comes another running sequence and it soon gets monotonous, predictable and really rather boring. A cameo from Mo Farah would have added some excitement. 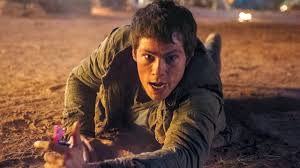 There’s some new enemies to fight as well. The spider-like Grievers in the original are replaced by Cranks, which look remarkably like crazed zombies. They’re victims of the Flare virus, still alive, very aggressive and sounding like they have a nasty case of indigestion. The camera never gets especially close to them – it probably didn’t want to – but the fact that we never get a good view of them makes you suspect they were created on a tight budget. And, as the film goes on, they become laughable.

The movie is also littered with incongruities and things that just don’t make sense. Despite savage conditions in The Scorch, the Gladers manage to survive on next to no water – we only see them taking the occasional glug. Or when Thomas explores the WCKD building, he drops down from a heat duct to the corridor floor and closes the grating behind him. Later he’s miraculously back in the duct. How did he manage that? 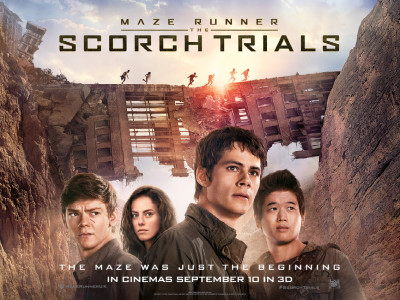 Maze Runner – The Scorch Trials has fallen into the sequel trap. It doesn’t live up to the original. Put all that running to one side and there’s not much left, apart from those Cranks. All the energy expended by the cast fails to get your pulse racing, the acting is just so-so and the dialogue fairly clunks along. To be honest, I’d give my Right Arm not to have to sit through part three!

Maze Runner – The Scorch Trials is UK cinemas now and is also reviewed on Talking Pictures.

Tags:  Divergent Dylan O'Brien Maze Runner:The Scorch Trials The Hunger Games The Maze Runner
This entry was posted on Thursday, September 10th, 2015 at 2:46 pm and is filed under Movies. You can follow any responses to this entry through the RSS 2.0 feed. Both comments and pings are currently closed.