It’s St Petersburg in 1882.  Teenage aristocrat Sacha is still recovering after the disappearance of her beloved grandfather: she waved him off on his latest expedition to the North Pole and he never returned.  When she realises the search parties had been looking in the wrong location, she sets out to find out what happened to him and his ship – and to save the reputation of her family.

Dubbed into English, this is a piece of hand drawn animation, and welcome change from some of the sterile computer generated fodder that’s so regularly served up.  And it’s beautifully crafted with a refreshing simplicity: no hard lines and a way of highlighting light and shadow that’s naïve and effective all at the same time.  It really comes into its own during the second half, which is devoted to Sacha’s expedition to the North Pole: by ship and on foot, she battles against the harshest of conditions, including a vicious blizzard with an almost hypnotic quality.

But if the animation in second half is so good, what about the first?  In truth, this half looks more like a historical costume drama as it sets the scene for Sacha’s epic adventure.  She had adored her grandfather and has inherited his stubbornness and directness, and it’s that side of her character that ruins her father’s political ambitions.  At her first ball, a Government minister is the guest of honour and she confronts him about her grandfather’s disappearance.  It’s done in all innocence.  What she doesn’t know is that the minister was looking for an excuse not to promote her father and she’s played right into his hands.  So, in disgrace, she decides to run away to find out the truth about her grandfather for herself, and restore her family’s honour at the same time.

And that political element is at the root of the film’s main problem.  It has a PG certificate and there’s nothing in it that would offend or especially frighten children, but it could most certainly bore them.  The first half is all about politics and, for younger audiences, it’s wordy and tedious.  Whether they would want to stick around for the second half, which has more in the way of action, is open to question.  Yet it’s being marketed as a children’s film, which points to the makers not having much of an understanding of their intended audience.  If anybody is going to like it, it’s the adults, who will lap up the animation and the simple escapism of the story. 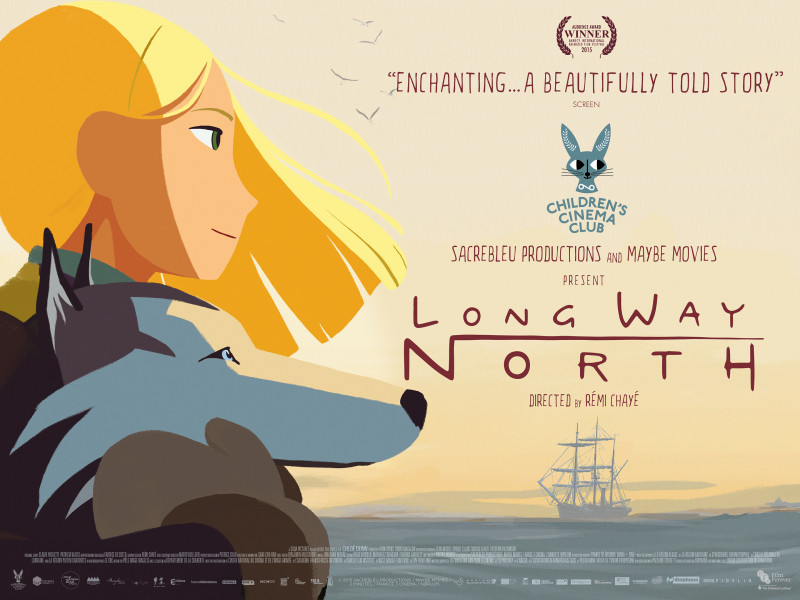 Although it tells its story with an appealing directness, Long Way North’s story comes close to being formulaic and doesn’t take us anywhere new.  The animation is excellent but when you put the two together you get a serious mis-match and a film that doesn’t really know its audience.

A Long Way North is released in cinemas on Friday, 17 June and reviewed on Talking Pictures on Thursday, 16 June 2016.

Tags:  disney Finding Dory Long Way North Universal When Marnie Was There
This entry was posted on Tuesday, June 14th, 2016 at 11:10 am and is filed under Movies. You can follow any responses to this entry through the RSS 2.0 feed. Both comments and pings are currently closed.