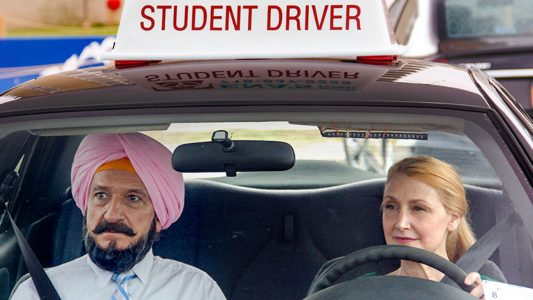 Successful literary critic Wendy (Patricia Clarkson) finds her world falling apart when her husband leaves her after 20 years of marriage.  Wanting to visit her daughter in Vermont but unable to drive, she takes lessons from Sikh instructor, Darwan (Ben Kingsley).  A political exile, he’s about to embark on a major change in his life, an arranged marriage, and that brings pressures and problems of its own.

So, yes, it’s a story about life lessons, wrapped up in the metaphor of taking driving lessons.  And it’s about two people embarking on important new phases in their lives when neither are in the first flush of youth, nor do they have much control over what’s happening.  Wendy’s husband has dumped her for somebody younger, Darwan’s new wife has been chosen for him by his family back in India.  It’s no surprise that teacher and pupil find plenty of common ground and eventually become good friends.  Even more inevitable is the hint of possible romance, but it’s most definitely one-sided.

Katha Pollitt’s original essay could have been over-stretched in transferring to the big screen as a feature film, but there’s more than enough here to keep the audience’s interest.  There’s Darwan’s personal story.  A university professor in India and a victim of persecution and imprisonment, he sought asylum in America and became a US citizen.  Now he has two jobs, cab driver by night, driving instructor by day.  Yet his nephew, who he took in as a favour to the boy’s mother, is the opposite: no papers and no job.  And it’s all presented in the context of the Sikh culture, something close to Darwan’s heart.  We’re taken inside the temple and witness his traditional marriage, with all its colour and ceremony. 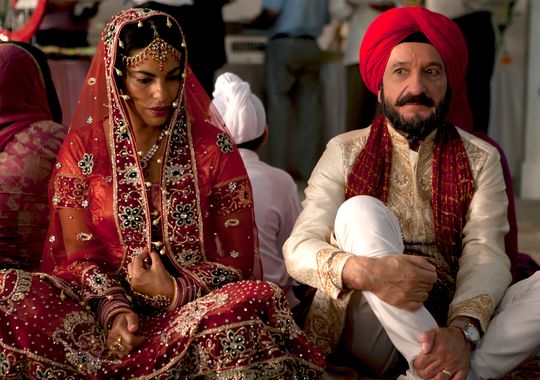 So why the 15 certificate?  Alongside all the life lessons, there’s a certain amount of grittiness, almost as if the film aspires to be something altogether edgier than the actual story allows.  The argument marking the end of Wendy’s marriage takes place in the back of Darwan’s cab and is full of the language you’d expect.  When her sister arranges a blind date for her, Wendy ends up spending the night with a man of the tantric persuasion.  And, amazingly, Darwan actually utters the “f” word.  You wouldn’t think he knew it.

It’s nicely acted, particularly by Clarkson and Kingsley, who both convince as two people who’ve already seen something of life and are confronting even more change.  Kingsley is at his best in the scenes with his new wife, played by Sarita Choudury, who we saw recently as Tom Hanks’ love interest in A Hologram For The King.  The awkwardness between the newlyweds is tangible: being complete strangers is difficult enough, but she’s something of a disappointment, with limited English and cooking that’s just not to his taste. 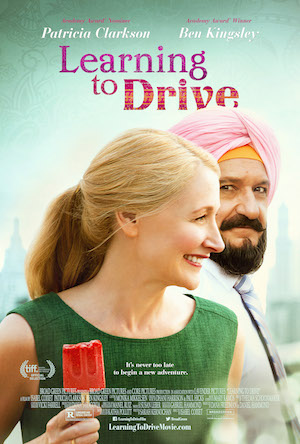 Ultimately, Learning To Drive is full of hope and optimism.  And you wouldn’t expect anything else.   You can take as many life lessons from the film as you like and feel uplifted at the same time.  Darwan’s car, incidentally, is an automatic and the film is rather similar:  an effortless, but not terribly demanding, watch.

Learning To Drive is released in cinemas on Friday, 10 June and reviewed on Talking Pictures on Thursday, 9 June 2016.

Tags:  A Hologram For The King Ben Kingsley Learning To Drive Patricia Clarkson Sarita Choudury Sikh Tom Hanks
This entry was posted on Thursday, June 9th, 2016 at 11:04 am and is filed under Movies. You can follow any responses to this entry through the RSS 2.0 feed. Both comments and pings are currently closed.