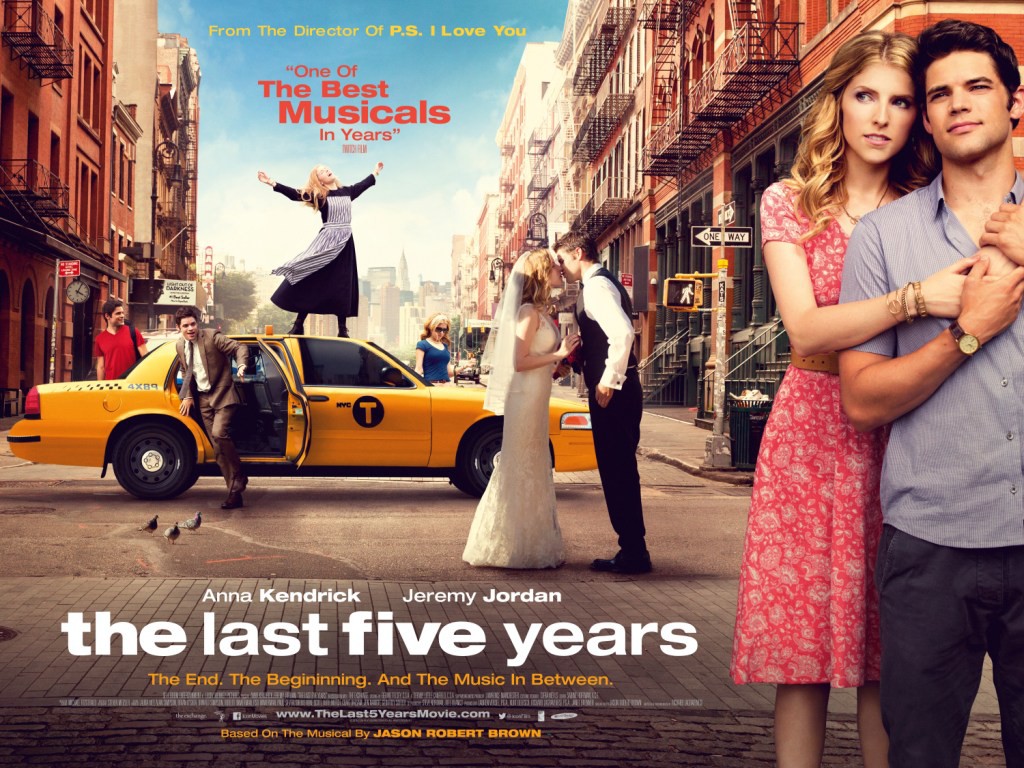 Originally a hit stage musical 15 years ago, The Last Five Years tells the story of the relationship between a young writer, Jamie (Jeremy Jordan) and an aspiring actress, Cathy (Anna Kendrick).  He gets lucky.  His first book is snapped up by a leading publisher, but her career doesn’t thrive and, despite numerous auditions, the best she can ever manage is an annual summer season in Ohio.  As his career continues to soar and takes up more of his time, hers heads in the opposite direction.  And the cracks soon start to show.

Don’t expect a traditional musical.  This one tells its story almost entirely through its songs and, to give it a smidge more interest, the writers have added a device that’s perilously close to being just a bit too clever for its own good.  Cathy’s songs start at the end of the affair – sorry, I know that’s a spoiler – and they work backwards to the start.  Jamie’s go in the other direction, so that they two overlap in the middle, when he proposes.

The songs themselves are very reminiscent of Sondheim but, despite trying their best, they’re clearly not by the man himself and eventually all start to sound the same.  The story is simply a series of songs, loosely joined together to make a film but there are times when you find yourself longing for just a line or two of dialogue. 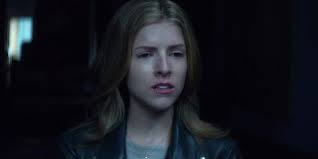 As a two-hander, the film stands or falls on the performances of Kendrick and Jordan and, thankfully, they’re up to the job.  Kendrick, especially, is impressive and is carving out a nice for herself as a musical performer with her strong voice and light-touch acting.  Together, she and Jordan make an appealing couple, especially when they’re full of the excitement that goes with the heady early days of their relationship.

Any other characters are no more than shadows in the background and we find out very little about them.  There’s only one scene which shows Jamie socialising with friends – Cathy never does – and, while it means we concentrate on the couple, it’s also curious that they only ever spend time with each other.  Maybe that’s where their problems started. 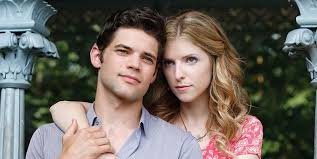 Moving the show from the stage to the big screen gives it a broader landscape, mainly New York, but despite all the shots of yellow cabs and the Empire State Building, it could be any big city.  And it’s at odds with what is essentially an intimate story, one that needs an equally intimate setting.  A small theatre would do that, but the big screen creates a barrier and the connection simply isn’t there.

But this is a romantic musical with its heart on its sleeve, probably more suited to the Glee generation than lovers of the traditional musical.  Ultimately, the fact that you know what happens in the end does colour your view of the characters, but it doesn’t make it any less sad.  Will you need a tissue?  That depends on you.  I coped quite happily without one.

Tags:  Anna Kendrick Jeremy Jordan New York Stephen Sondheim The Last Five Years
This entry was posted on Thursday, April 16th, 2015 at 7:09 pm and is filed under Movies. You can follow any responses to this entry through the RSS 2.0 feed. Both comments and pings are currently closed.