Jumanji – Welcome to the Jungle is the film your pre-teens and teenage children will laugh at the most this Christmas. Four high school kids discover an old video game console and are drawn into the game’s jungle setting, literally becoming the adult avatars they chose. What they discover is that you don’t just play Jumanji – you must survive it. The movie is released just before Christmas on 20 December 2017.

The film starts by going back to 1996 when a wild teenager named Alex J for Joseph also know as AJ Vreeke receives the original Jumanji board game after his father finds it while jogging on a beach, but puts it aside, dismissively noting that nobody plays board games any more, instead playing a videogame involving motorcycles. Overnight, the game changes so that the box’s contents are now a video game cartridge, but when Alex puts it in his console and turns it on, he vanishes.

After this flashback we go back to 2017 where high school student Spencer Gilpin is sent to detention for helping his former best friend, Anthony ‘Fridge’ or ‘Refridgerator’ Johnson, with his homework by writing Fridge’s essays for him. They are joined by Bethany Walker, a beautiful but superficial girl (played by Madison Iseman) who was caught talking on her phone during a quiz, and Martha Kaply, a socially awkward girl who objected to being made to participate in gym class. For detention, they are charged with removing the staples from discarded magazines in an old storage area, but Spencer discovers the console containing the Jumanji game and convinces the others to play it with him. They are unable to access one of the five player options, a pilot, but once all four others have been selected, the game draws them all inside it. 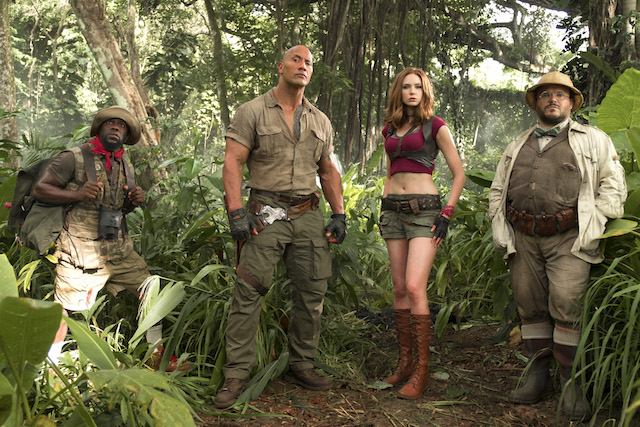 Finding themselves in a jungle, all four are shaken to realise that they have become the avatars they chose for the game, with the result that Fridge is now a short zoologist (played by Kevin Hart) and Bethany’s avatar, “curvy genius” Professor Shelly Oberon, is an overweight middle-aged man (Jack Black). Bethany is suddenly eaten by a hippopotamus that emerges from the river, but she swiftly reappears after falling out of the sky. Fleeing from a stampede of hippos, the group encounter Nigel, whose repetitive responses help Spencer identify him as an NPC who tells them that they have come to Jumanji (in the context of the game) in response to a letter Nigel wrote to Spencer’s avatar, Dr. Smolder Bravestone, an archaeologist and explorer (played by Dwayne The Rock Johnson). The letter explains that Nigel was part of an expedition by explorer John Hardin Van Pelt to claim the legendary gem, the “Jaguar’s Eye”, removal of the gem from the large jaguar statue granting Van Pelt control over the animals of Jumanji. In order to complete the game, the players must return the gem to the jaguar statue and call out “Jumanji”. 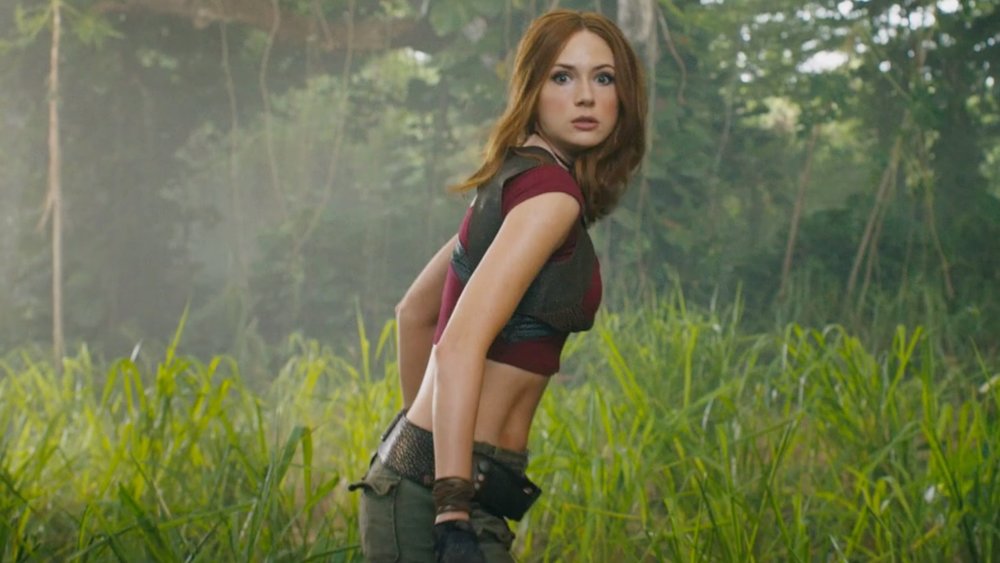 With those instructions given, the group are dropped off outside a forest, where it is revealed that Bethany alone can read the map Nigel gave them, the map directing them to the next stage of their quest. They are subsequently attacked by Van Pelt’s men on motorbikes, but manage to escape by fleeing through the trees and jumping off a cliff into a river. They then have to overcome a series of challenges and adventures to save Jumaji before being allowed to return home. The tricky thing is that examining a series of line tattoos on their forearms, Spencer realises that these bars indicate the number of lives they have in the game, guessing that they will die for good once they lose all three lives. With only three lives given to each of them, the four mates are forced to work together to beat the game if they hope to make it back to the real world.

The challenge of making a sequel to a popular movie from the 90s like Jumanji was certainly tough. Jumanji – Welcome to the Jungle is in fact the follow up film from the Robin Williams-led 1995 film adaptation of Chris Van Allsburg’s children’s book Jumanji. Fans of Robin Williams won’t be disappointed though, because Welcome to the Jungle still retains a certain quirkiness and brings the weird and wonderful world of Jumanji to life once again for a new generation, more precisely the children of those teenagers who are now the parents.

A lot of the jokes and gags are created by Kevin Hart and Jack Black, who are very charismatic comedians. Jack Black plays the avatar of a gorgeous blondie self-centred teenage girl which is hilarious in its own right. I would dare say that this role is Jack Black’s best character to date. He is incredibly funny when acting like a capricious teenage girl in a body of a fat middle aged man. Brilliant! The Rock and Kevin Hart bring a laugh a minute their gags based on their physical features (one is tall and full of muscles and the other short and snappy). The fact that they know each other well from other movies is clearly an advantage.

Jumanji – Welcome to the Jungle provides the opportunity for new audiences to explore a classic book as well as a movie that has a huge fan base. It has a modern twist on the original story, i.e. the teenagers are tele-transported into the video game Jumanji rather than the other way round like in the original movie. It’s full of action, adventures, brilliant special effects and humour.

The sequel is certainly entertaining and good fun. I like the fact that it’s a non typical and not cheesy Christmas family film. While children – especially our two 11 year old child reporters Diego and Zidane who came to the early screening – absolutely loved Jumanji, parents were slightly underwhelmed. Having said that, Jumanji is a film aimed at pre-teens and teenagers so it makes sense that they enjoyed it the most. It could be the first film children go to see with their mates rather than accompanied by their parents. For the adults, the duo of Dwayne Johnson and Kevin Hart is always fun to watch even in a teens movie.

Jumanji – Welcome to the Jungle is released in UK cinemas on 20 December 2017.

This entry was posted on Monday, December 11th, 2017 at 11:08 am and is filed under Movies. You can follow any responses to this entry through the RSS 2.0 feed. Both comments and pings are currently closed.