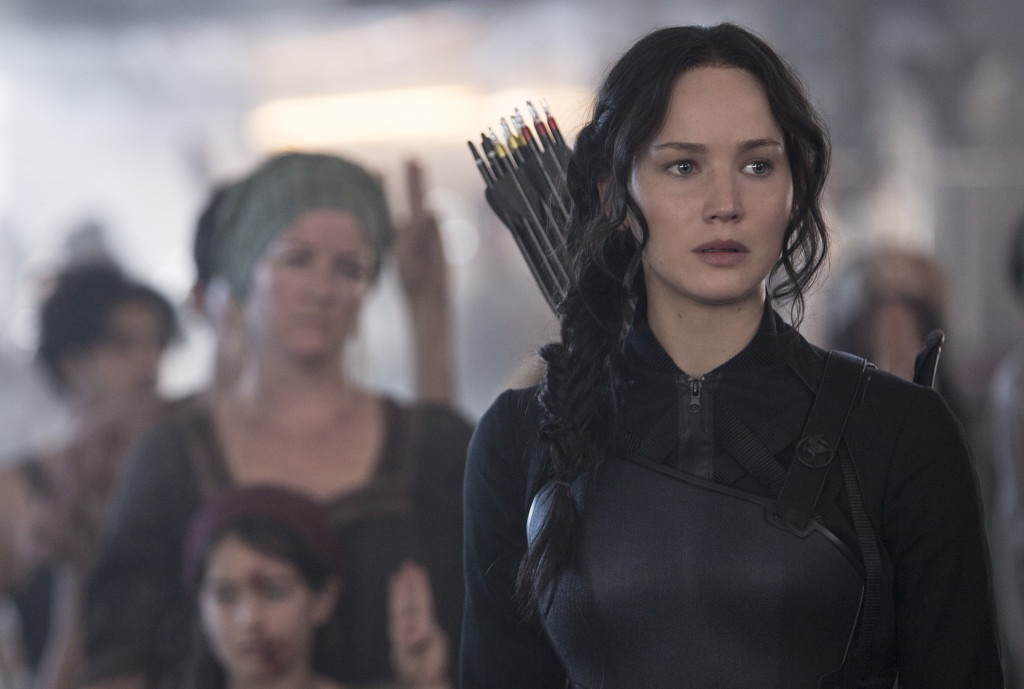 The film follows on directly from part two, with Katniss Everdeen (Jennifer Lawrence) having shattered the Hunger Games forever. Her home, district 12, has been completely destroyed by the Capital and the other districts, uniting under President Coin (Julianne Moore), are fighting for freedom.  They need a figurehead – the Mockingjay – and Katniss is the perfect candidate, given the following she gathered during the Hunger Games.  She eventually agrees, but she has another, more personal motive – to rescue Peeta (Josh Hutcherson), who survived the Games with her, from the clutches of the evil President Snow (Donald Sutherland).

If you’re a newcomer to The Hunger Games – the films or the books – don’t let that put you off seeing the movie.  Director Francis Lawrence has made sure there’s more than enough to appeal to newbies and devoted fans alike.  The script seamlessly fills in enough gaps to make sure you understand what’s gone on in the past and who’s who.  And, as we’re plunged right into the heart of the action from the word go, they’re also useful to anybody whose memory of the first two films has faded.

Enthusiasts will find plenty that’s new as well – and it’ll leave them wanting more.  The tone of the film is much darker than in the others and this is mirrored by its shadowy, gloomy look which hints at darker, more sinister goings-on away from the general destruction.  The aerial shots are giddy-making: many of the buildings are huge edifices with never-ending staircases and they are always viewed from the very top.  And the characters have moved forward as well, with Katniss damaged from her experiences during the Games and struggling to come to terms with her feelings for Peeta.  Meanwhile, loyal friend Gale (Liam Hemsworth) has a much bigger part to play in the action than before.

Katniss is a great heroine and role model and Lawrence is excellent in the role.  Yet she’s full of contradictions: brave to the point of fearless but with more than enough weaknesses to make her all too human, strong yet young enough to be manipulated by politically savvy adults.  Other familiar faces return as well, including Donald Sutherland having a ball as the deadly President Snow and Stanley Tucci, together with those amazing teeth, as Caesar Flickerman.  His role’s smaller this time, unfortunately, but it’s also more sinister as he interviews Peeta for propaganda purposes.  And, as President Coin’s right hand man Plutarch Heavensbee, Philip Seymour Hoffman gives a delightfully subtle and knowing performance.

Inevitably, the film ends suddenly with a cliff hanger.  This is Part 1, after all, and it wouldn’t be doing its job if it didn’t whet our appetite for Part 2 – and that’s not due until the same time next year. 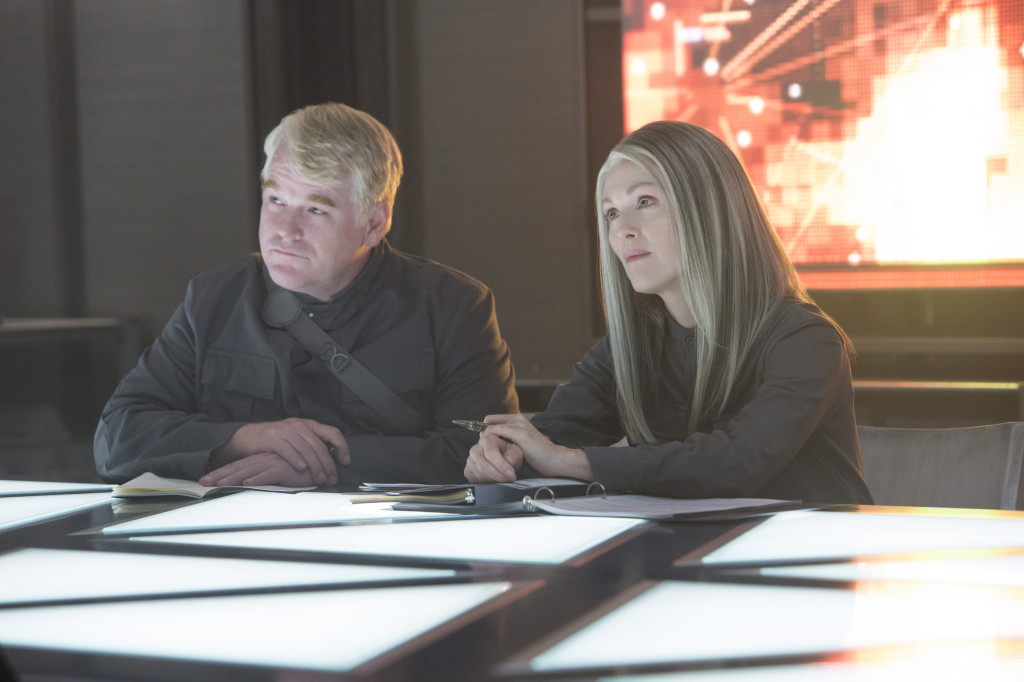 Mum’s rating:  8/10    The Hunger Games – Mockingjay Part 1 is on a big scale with powerful set pieces, sitting up and begging to be seen at the cinema – an IMAX size screen for preference.  It may be part of a series, but it also stands up perfectly well on its own, with strong characters, a good story, interesting ideas and plenty of action.  Next November can’t come quickly enough!

The Hunger Games – Mockingjay Part 1 is released on Thursday, 20 November 2014.

Tags:  Donald Sutherland Jennifer Lawrence Josh Hutcherson Julianne Moore Katniss Everdeen Liam Hemsworth Mockingjay Part 1 Philip Seymour Hoffman Stanley Tucci The Hunger Games
This entry was posted on Sunday, November 16th, 2014 at 12:45 pm and is filed under Movies. You can follow any responses to this entry through the RSS 2.0 feed. Both comments and pings are currently closed.