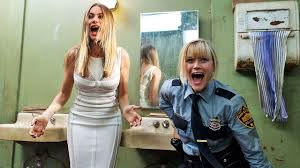 Agent Cooper (Reese Witherspoon) is a straight cop, playing it so by the book that you’d think she wrote it. Her first proper job in the field is to safely escort Daniella Riva (Sofia Vergara) to court. She’s the wife of the member of a drugs gang and her husband is going to testify against his drug lord boss. But things don’t go according to plan when the gang take matters into their own hands, and the two women end up going on the run. And it’s not just the cartel who’s after them. There’s some crooked cops as well. 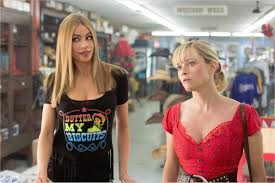 Hot Pursuit not only fancies itself as a female buddy movie, but it bills itself as a comedy. And that’s its number one problem because it’s so unfunny, it probably contravenes the Trades Descriptions Act. Crass is its default setting so, when the occasional amusing moment manages to raise a smile – there’s a Speedy parody sequence involving a coach of old people which works quite well – and you start to warm towards it, it reverts back to crass and you switch off again.

And you rather suspect that the makers – which include Witherspoon as producer – know that it’s a dud, because they’ve packed the end credits with a series of out-takes that are actually reasonably funny. It’s a desperate attempt to make you leave the cinema laughing and liking the movie more than it actually deserves. 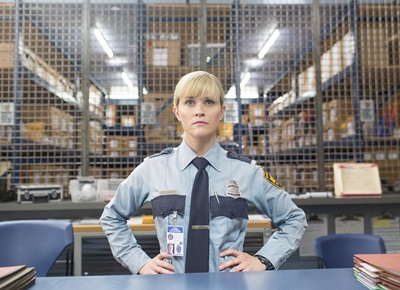 There’s one particular out-take that gives the game away as far as Witherspoon is concerned. She fluffs a line and mutters under her breath, with deep irony, “And I was giving the performance of a lifetime.” She’s just trying to make the best of a bad job. As is Vergara, so the two do the only thing they can under the circumstances – over-act to cover up its short comings. In fact, Vergara hams it up so much that her Colombian diva could easily be straight out of a cartoon. She spends the first part of the film in a skin tight white dress that, despite her climbing out of a window and landing in the dirt, remains completely pristine. I watched it to see if it got dirty as a distraction from the rest of the film.

The attempt at a Thelma and Louise parallel is painfully obvious throughout and, just in case we haven’t picked it up, it continues with the arrival of Randy (EastEnder’s Robert Kazinsky), who the women discover when they steal his truck. He’s asleep in the back. He could start a second career as a Damian Lewis lookalike if he felt the need. Instead, his role here is a pale imitation of the Brad Pitt one. And he’s no Pitt. 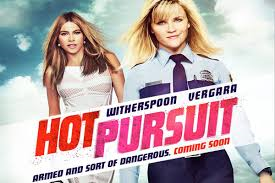 Hot Pursuit is so criminally bad they should lock it up and throw away the key. It doesn’t work as a comedy, a chase movie, an action movie – or any kind of movie. It’s derivative, tepid and left me utterly stone cold.

Hot Pursuit is currently in general release and is also reviewed in the latest edition of Talking Pictures.

Tags:  Brad Pitt Damian Lewis EastEnders Hot Pursuit Melissa McCarthy Robert Kazinsky Sandra Bullock Sofia Vergara The Heat Thelma And Louise
This entry was posted on Saturday, August 1st, 2015 at 11:00 am and is filed under Movies. You can follow any responses to this entry through the RSS 2.0 feed. Both comments and pings are currently closed.