Be prepared for some belly crackling gags and over the top action because MARVEL’S GUARDIANS OF THE GALAXY VOL. 2 is back in UK cinemas on 28 April. London Mums attended the premiere at the Hammersmith Apollo last night and totally loved it. 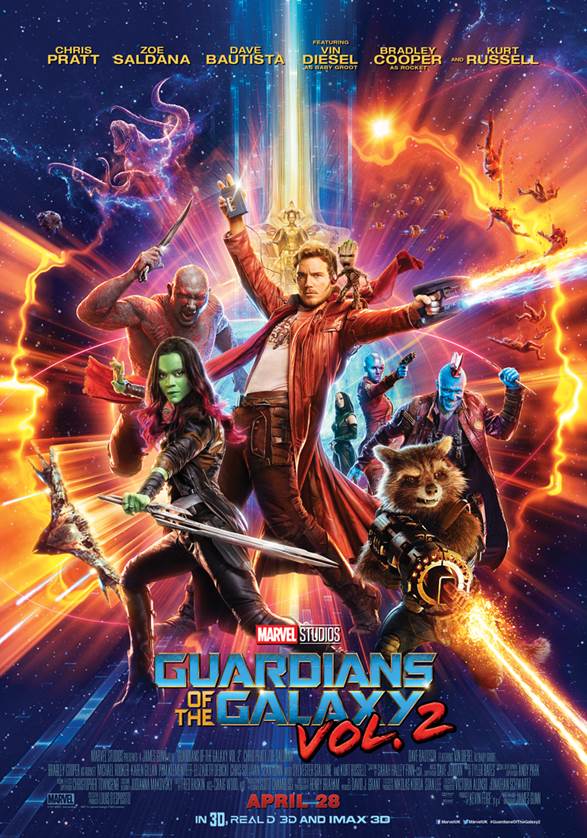 Set to the all-new sonic backdrop of Awesome Mixtape #2, Marvel’s Guardians of the Galaxy Vol. 2 continues the team’s adventures as they traverse the outer reaches of the cosmos. The Guardians must fight to keep their newfound family together as they unravel the mystery of Peter Quill’s true parentage. Old foes become new allies and fan-favorite characters from the classic comics will come to our heroes’ aid as the Marvel Cinematic Universe continues to expand. 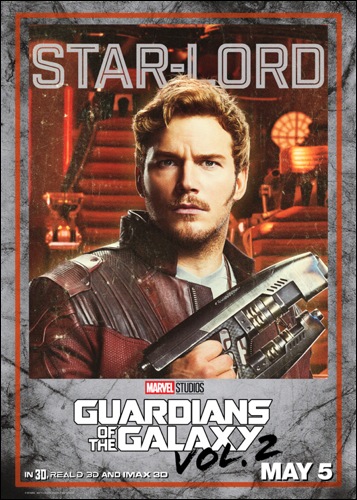 What I loved the most about the first Guardians of the Galaxy film was the humour and the soundtrack. It’s a perfect family movie. After watching it, how many of you mums have created an Awesome Mix for your children? I certainly have. One day I’ll share it online with you all. Vol 2 of the superhero comedy franchise is even funnier and the soundtrack obviously fantastic. I was afraid that this sequel would be disappointing because this is the way sequels usually go. But it did not disappoint me at all as it had more of what I loved about the first film: endless and quirky gags, tongue-in-cheek dialogue, self irony, goofy plot and of course upbeat retro pop music from the 80s. 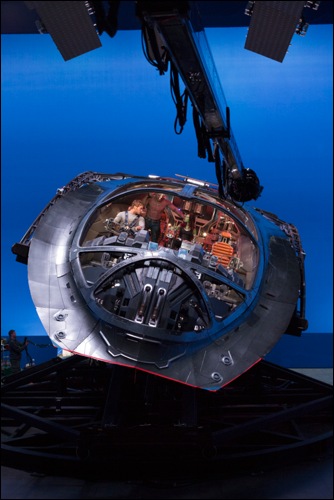 Behind the scenes of Guardians Of The Galaxy Vol. 2. Photo credit: ©Marvel Studios 2017

The old gang (Peter Quill/Star Lord, green-faced warrior lady Gamora, mighty Drax, Baby Groot, Rocket) is joined by Yondu, the professional thief who kidnapped Quill from Planet Earth when he was a child, Nebula, Gamora’s nasty sister, as well as a new character, Mantis, who has the gift of being an empath, someone who can sense people’s feeling by laying hands on them. 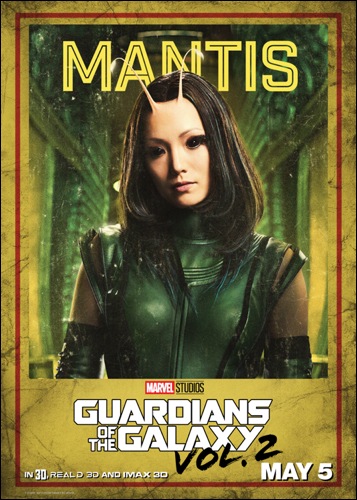 Baby Groot (voiced by Vin Diesel) is as sweet as ever and will be become one of the most popular children’s characters of all times. I loved his dance moves, his mix-ups when the gang asks for help and the fact that he is always the one who saves the day! He’s probably my favourite character in the franchise. At the very end after the credits we see him as a teenager. Vol 3 cannot come soon enough. 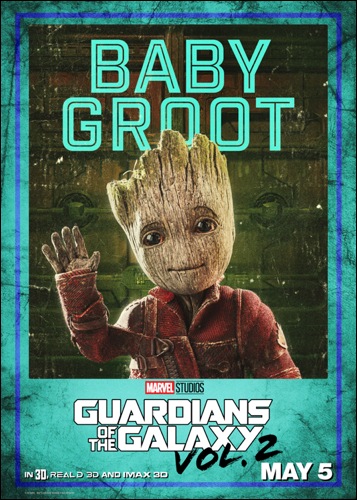 The foxy weasel racoon Rocket is always a favourite with the kids but will be even more so after watching Vol 2. His constant arguing with Star Lord, their pointless debates and gags are self indulgent and over the top but I loved them. 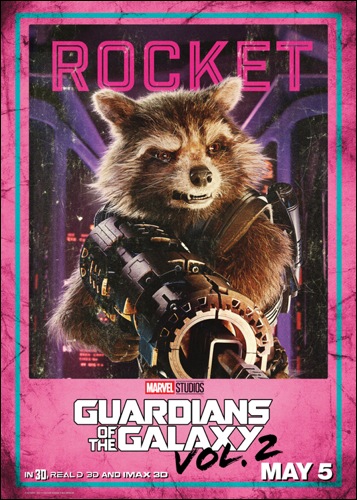 This sequel is about exploring the role of the absent daddy who returns with big promises.  One of the biggest mysteries in the first Guardians of the Galaxy was the identity of Star-Lord’s father. So a lot of Vol 2 deals with the relationship between Quill’s hero and his dad (played by Kurt Russell), Ego the Living Planet. 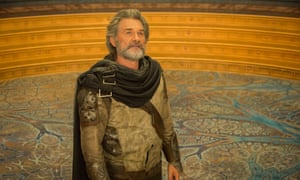 Meeting him obviously shakes Peter’s world. He asks himself why his father wasn’t around but at the same time he respects him. It’s a learning curve for both of them. Like in a real life scenario. But it’s not all what it seems at first. Without spoiling the plot, let’s just say that it’s not all gold what shines. The movie is all about the family, not necessarily the blood relatives but the family we choose to have including friends. 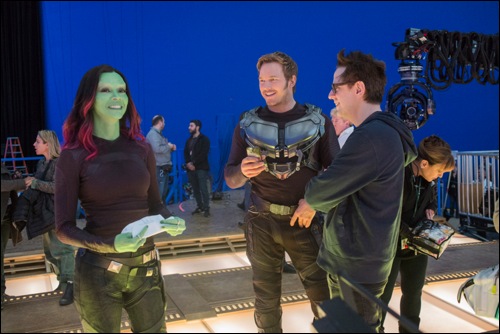 Stan Lee has a couple of cameos in this film with the one after the credit where he’s left alone on a planet saying ‘How do I go back on Earth? I have so many more stories to tell…’. Does it mean he’s not going to doing more cameos? Hopefully he will as I find myself along with most Marvel fans looking for him in all films. But I appreciate he is over 90 and as busy as ever.

To truly appreciate this film, you need to let go and just enjoy every scene for what it is, without thinking too much about the story and the interlinked parts of the plot which are a bit weak at times. This is why I think children as well as childish-like parents will love it.

Some scenes might not be suitable for kids under 8 years of age, but generally Guardians of the Galaxy Vol 2 is a film for everybody.

By the way…. I still have my original Sony Walkman at my mum’s house just like Peter Quill’s.

Marvel’s Guardians of the Galaxy Vol. 2 blasts into cinemas on 28 April 2017. 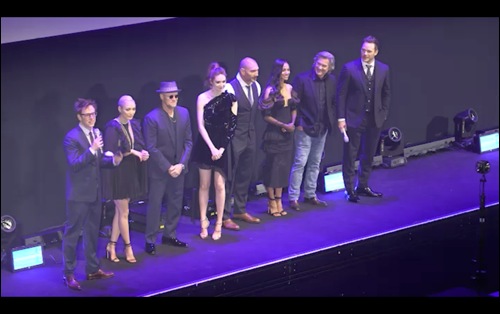 Cast and Director attended the European one night only premiere at Hammersmith Apollo which featured amazing special visual effects while Awesome Mix 2 played in the background. It was probably the coolest premiere I have ever attended. What an amazing start of the film. The director introduced the cast who seemed as amazed as we were in the audience about the theatrical show. 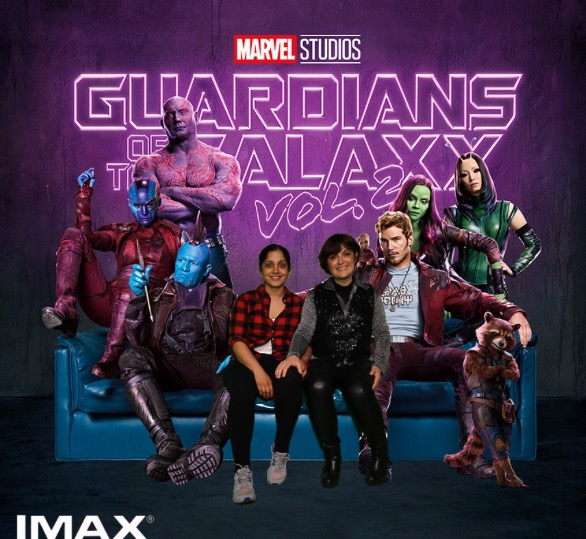 To celebrate the upcoming release of the highly anticipated sequel and intergalactic smash hit Guardians of the Galaxy Vol.2 on 28 April, Disney have launched an exciting range of new products, including action figures and plushes, costumes, mugs, toy cars, LEGO sets, blaster guns and more!

The children from the London Mums’ kids club have chosen their favourite ones: 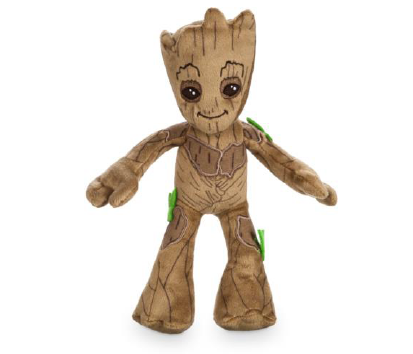 Baby Groot is certainly the cutest Guardians of the Galaxy Vol. 2 character and a perfect little companion to all kids who are big fans of this franchise. Even if they don’t know Groot or the film, this soft toy bean bag is really sweet and a great addition to any film merchandising collection. It’s made of soft cuddly plush fabric and features wood grain detailing, 3D felt leaves and an adorable embroidered expression. RRP £7.99 Available from the Disney Store and Disneystore.co.uk 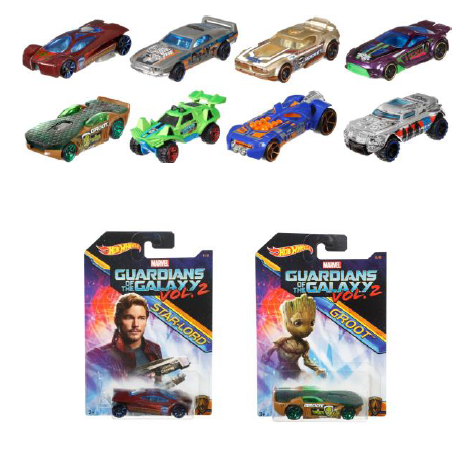 Hot Wheels® and Marvel fans will love re-creating all the thrills of the Guardians of the Galaxy Vol. 2 blockbuster movie with this assortment of 8 amazing 1:64 scale die-cast vehicles with realistic details and inspired-by decos. Our Baby Groot little car is great fun and runs fast thanks to its well manufactured wheels. Diego (10) is still unsurprisingly enjoying playing with these toys as they are really realistic and solid. His own Hot Wheels collection is huge and this car will be a great addition to the growing collection.

RRP £2.59 each
Available in all good retailers 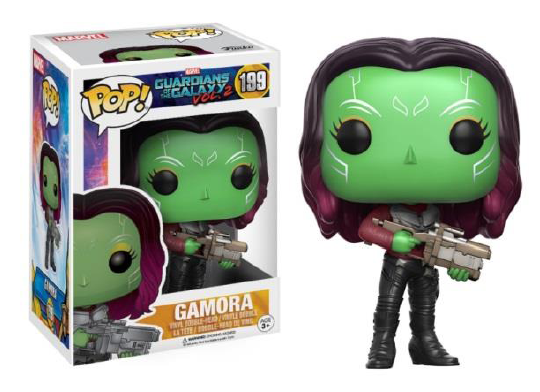 This Guardians of the Galaxy Vol. 2 Gamora POP! Figure stands around 9cm tall and comes packed in an illustrated window box.This figure is mainly for collectors as it does not do much. It might be worth some money in a few years. I personally prefer action figures because children can play with them. The quality of this figure is stunning though and very robust. Kids could even play without devaluing it. 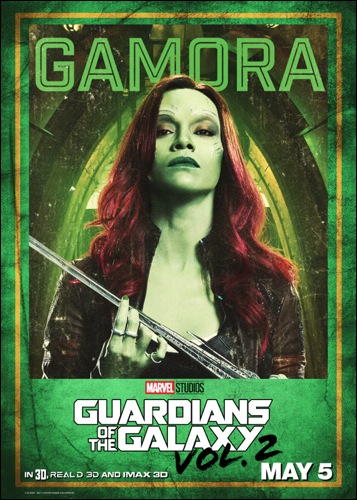 The range is available from Disney Store as well as other high street and online retailers.

This entry was posted on Tuesday, April 25th, 2017 at 12:38 pm and is filed under Movies. You can follow any responses to this entry through the RSS 2.0 feed. Both comments and pings are currently closed.