The grandma in question is Elle (Tomlin), a semi-retired poet in her seventies who’s reeling from a double emotional hammer blow: the death of her long term partner and a subsequent split with a much shorter term one.  Then granddaughter Sage (Julia Garner) turns up on her doorstep with a problem that only $600 can fix.  But Elle’s paid off all her debts and cut up her credit cards to make a wind chime so, as she can’t help with the money, the two of them take to the road to find people who can.

So it’s a road movie, right?  Yes, but don’t go expecting Thelma And Louise.  All the action takes place in just one day, with Elle and Sage not venturing more than a few miles from home.  And that makes it a tight, disciplined piece of film making, with no room for flabby plotting or rambling dialogue.   The characters are kept on an equally tight rein as well, with writer/director Paul Weitz making sure each one of them has a purpose, right down to an unfortunate restaurant customer who wants hot sauce to go with her meal!

It is, however, very much Elle’s movie.  Calling her cranky is putting it mildly, but there’s a reason for her jaundiced view of the world and razor sharp tongue.  She’s still suffering from the death of her long term partner, whose name is tattooed on her wrist as a constant reminder, so her acid – and often foul – mouth is a defence mechanism to keep the world at bay.  She doesn’t care what people think of her or of what she says and certainly isn’t inclined to keep her voice down in the coffee shop when discussing why Sage needs $600!  Yet, for all that anger, she will still protect her granddaughter with her last breath.

Weitz wrote the script “hearing Lily’s (Tomlin) voice” and, boy, does it show!  The actress has always been something of a scene-stealer, but this puts her well and truly in the spotlight, alternating between anger and contempt, yet also displaying real compassion and a softer side that gradually catches up with her and everybody else.

This is, however, no one-woman film, as Tomlin is matched by a stand-out, one scene performance from Sam Elliott as one of the potential sources of cash.  With that characteristic voice from the depths of his boots (we heard it last month in Disney Pixar’s The Good Dinosaur), he lives in a house festooned with photographs of all his wives and children, who are numbered rather than named.  The reason why becomes clear as his story unfolds before us and it gets more and more tragic.  It all ends with tears in Elliott’s eyes – and yours too. 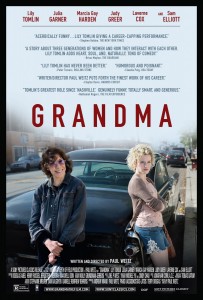 Grandma is a genuinely grown-up comedy – funny, tart, sweet and tragic all at the same time.   And it’s a film that does something special with its portrayal of older people.  There’s none of the cosiness of The Best Exotic Marigold Hotel: the fact that Elle and her contemporaries are older is just another facet of their characters and they’re all the richer for it.  As the great Bette Davis once said, “Old age is no place for sissies!”

Grandma is released in cinemas on Friday, 11 December and reviewed on Talking Pictures on Thursday, 10 December 2015.

Tags:  Grandma Julia Garner Lily Tomlin Marcia Gay Harden Sam Elliott Talking Pictures The Good Dinosaur Thelma And Louise
This entry was posted on Tuesday, December 8th, 2015 at 7:10 pm and is filed under Movies. You can follow any responses to this entry through the RSS 2.0 feed. Both comments and pings are currently closed.