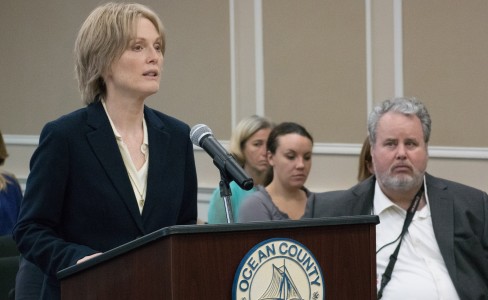 Based on a true story and a short documentary from 2007 with the same name, Freeheld is the story of Laurel Hester (Julianne Moore). She’s a hard working police officer in Ocean County, New Jersey, who loves her job – drugs busts, murder investigations, the lot. But what her colleagues – including her closes one, Dane Wells (Michael Shannon) – don’t know is that she’s gay. When she meets the much younger Stacie Andree (Ellen Page), she finds the relationship she’s been looking for, they settle down together and register themselves as Domestic Partners.

But when Laurel is diagnosed with cancer, she assumes that their legal status means that Stacie will be entitled to her benefits, should the prognosis not be good. The local legislature, aka the Board Of Freeholders who also happen to administer public service pensions, have a different view.

The original documentary of the same name lasted just 40 minutes long, which tells you something about this dramatised version. The real meat of the story is in the second half, which looks at the campaign, Laurel’s failing health and the relationship between the two women. Much of the first half is taken up with Laurel as a policewoman and eventually meeting Stacie, and this is where the film feels stretched and strained, at times almost like padding. However, if you take a look at the website for Freeheld the documentary, www.freeheld.com, you’ll see that some of its scenes have been faithfully re-created. And that the story has been noticeably Hollywood-ised: the real Laurel’s post-chemo baldness, for instance, is nowhere near as perfect as Julianne Moore’s smooth dome.

The fact – and it is a fact – that Orange County legislature has five Freeholders is perfect from a dramatic perspective. Each one has a single, strong characteristic and it means that one of them can swim against the tide, in the grand tradition of Twelve Angry Men. In this case, he’s Bryan Kelder (Josh Charles from TV’s The Good Wife) who starts the turn of the tide that leads of the campaign’s victory. The major roles have more depth – with one notable exception. Heading up the local action group is Steve Goldstein (Steve Carell), who describes himself as “loud, gay and a Jew”. He’s most certainly all three but, much as he causes a few giggles, he’s little more than a caricature and a gay caricature at that. An odd fit for a film that’s about equal rights for the gay community. 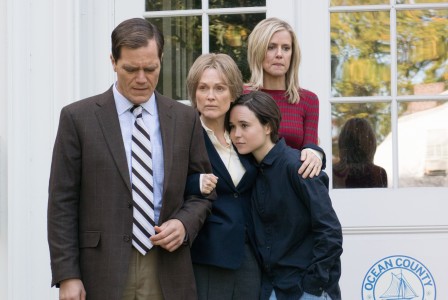 Julianne Moore inevitably suffers beautifully as Laurel, but this is the second film in recent years where she’s battled bravely against a disease that we all dread. Here’s it’s cancer, so she goes through radiotherapy and chemo, loses her hair and is eventually wheelchair bound. And she does it with conviction. On the male side of the story is Michael Shannon as her police partner. He’s solid and straight as they come, doesn’t have much in the way of imagination, awkward when confronted with gay issues and finds emotions difficult to cope with. But he still has the strength to back Laurel all the way, even when that means being the only cop in Ocean County openly supporting her. And the consistently impressive Shannon is the perfect counterpoint to the women at the heart of the story. 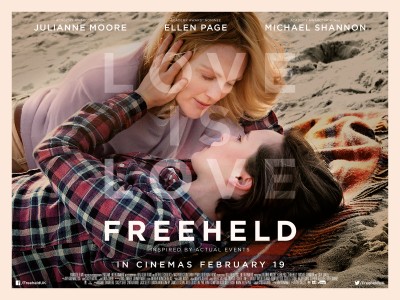 Freeheld aims straight for your tear ducts. Unfortunately, you soon get wise to it and become a touch resistant. It wears its heart on its sleeve excessively – just take a look at the poster! – it’s over the top at times, usually thanks to Steve Carell, and it’s a very Hollywood-ised portrait of an inspiring story. Ultimately, it’s full of good intentions, but the fact that they take over the film make them its downfall.

Freeheld is released in cinemas and online on Friday, 19 February and on DVD on Monday, 22 February. It is reviewed on Talking Pictures on Thursday, 18 February 2016.

Tags:  Ellen Page Freeheld Josh Charles Julianne Moore Laurel Hester Michael Shannon Steve Carell The Good Wife Twelve Angry Men
This entry was posted on Wednesday, February 17th, 2016 at 1:00 pm and is filed under Movies. You can follow any responses to this entry through the RSS 2.0 feed. Both comments and pings are currently closed.