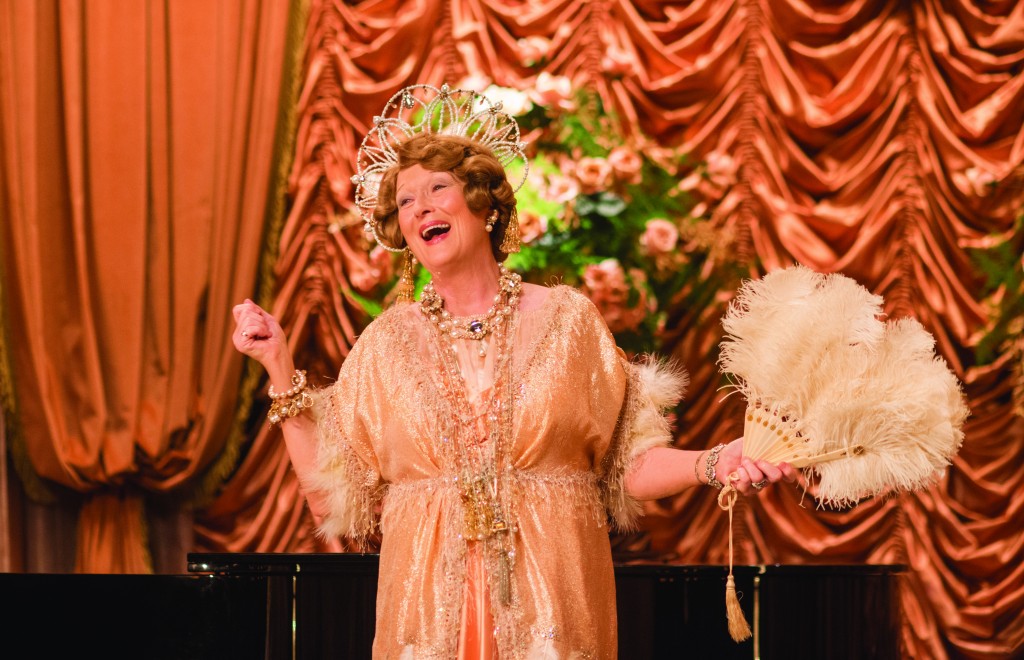 American socialite, Florence (Meryl Streep) nursed a deeply held ambition to sing opera in front of an audience yet, despite tuition from some of the most eminent teachers in New York, her singing voice was flat and she couldn’t get near a high note. But, with the support of her husband, St Clair Bayfield (Hugh Grant) and her accompanist, Cosme McMoon (Big Bang Theory’s Simon Helberg) she releases a record and gives a recital for the benefit of the American forces. Which is when she learns the truth about herself.

Up until recently, you might not have heard of Foster Foster Jenkins, or known what made her famous. But Marguerite and now this film have changed all that. Her recordings still exist, the most famous being her version of Mozart’s Queen Of the Night, with its high notes like fingernails down a blackboard.   The publicity machine for Florence Foster Jenkins has also done its part, but also appears to have caught director Stephen Frears and screenwriter Nicholas Martin on the hop. They’ve taken the conventional approach of making the audience wait at least half an hour before hearing Florence sing for the first time. But the TV commercials and trailers have done their job so well that the moment is robbed of its impact. Instead, I found myself wondering whether Streep would be able to sing off key successfully: after Mama Mia and Into The Woods, we all know she can sing. As it is, there are times when she looks uncomfortable and seems to be trying too hard.

Florence’s inability to sing makes this a one joke story, but the laughs from her lack of vocal talent are short-lived. This is, however, a heartwarming comedy, with the humour coming from her relationships with others and their response to her singing. Singing coach Carlo Edwards (David Haig) puts her through all manner of ludicrous exercises, convincing her that she can sing. And the first reactions of her accompanist, Cosme McMoon, when he realises who – and what – he’ll be playing for, firstly at her lessons and then at her concerts, are priceless. 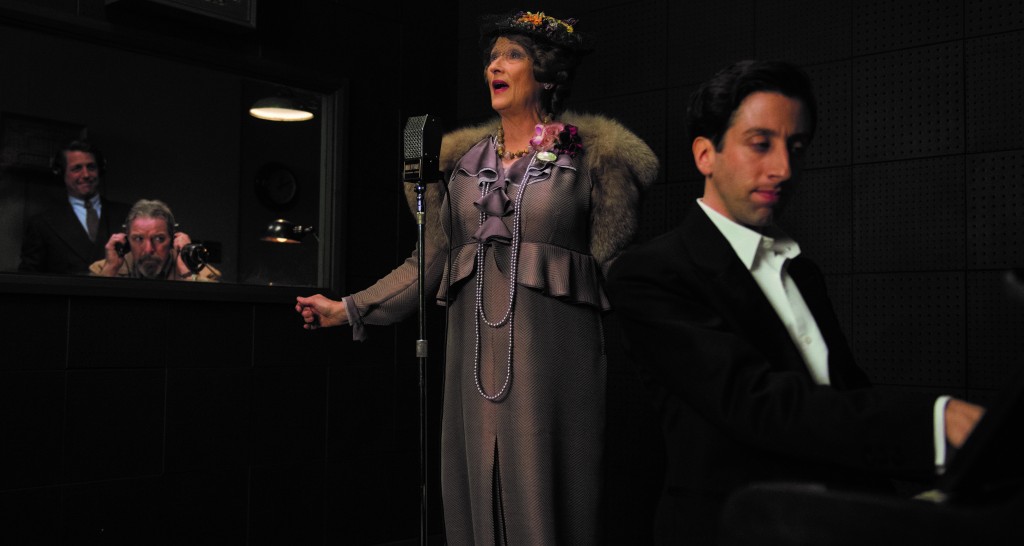 Her performance in front of the audience of servicemen at Carnegie Hall makes for a fitting and moving climax. Until now, Florence has only performed to small audiences in salons and they are mostly – but not always – too polite to laugh out loud. The servicemen aren’t, nor are they sober. As she hears the shrieks of laughter, the shattered look on Streep’s face turns her into something as fragile as a piece of tissue paper, likely to crumple at any moment. It’s a lump-in-the-throat moment, with the crowd turned around by the person you’d least expect and, while it’s a touch too sentimental, it still works.

Behind the scenes, we get an insight into the real Florence: this is not so much a bio-pic, more dramatized version of her life, but this side of the story is true. She wears a wig to disguise a chronic illness. Her lifelong love had always been music and, as a child, was something of a prodigy on the piano, but a broken arm put a stop to her career. She had to find another way of making music and it turned out to be singing. But, while she’s physically more fragile than she looks, she’s rather demanding and more difficult to live with than she might initially appear.

Streep is her usual excellent self as Florence, while Hugh Grant rises to the challenge of acting with her and is surprisingly good. But the real scene stealer is Simon Helberg, perfectly cast as McMoon and a joy in the comedy scenes. For the majority of the film, he’s almost permanently on the brink of bursting out laughing – and does so occasionally – with a giggle bubbling away under the surface. There’s a subtle shift near the end of the film, when what’s bubbling away underneath changes to tears. 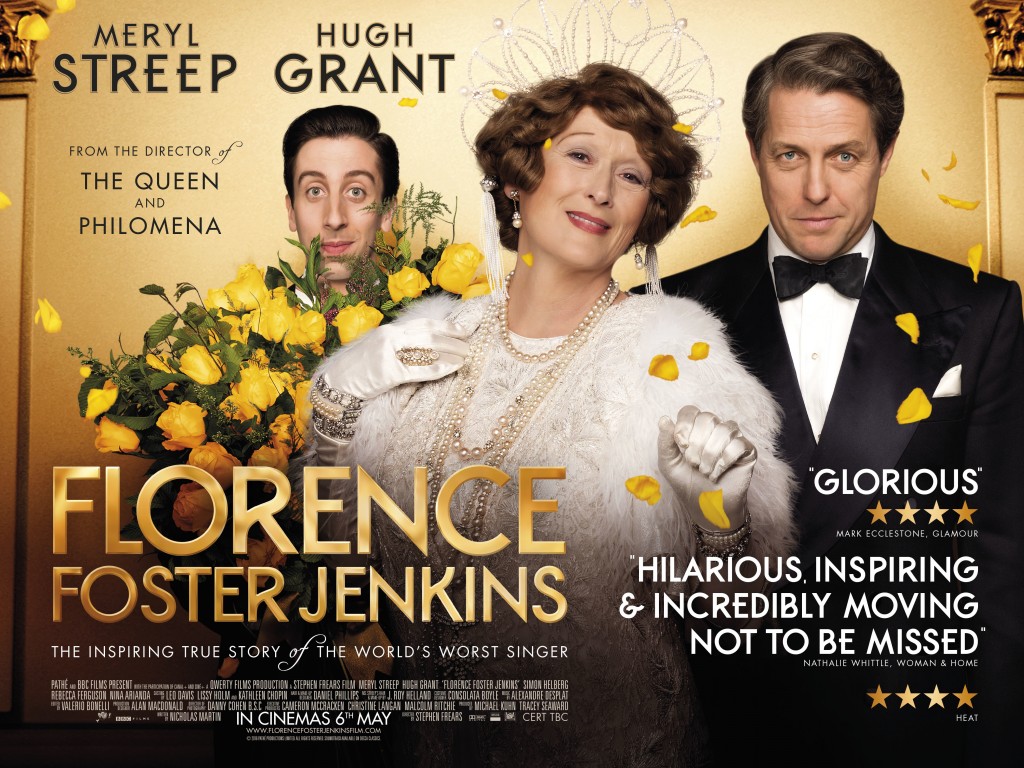 In Florence Foster Jenkins, director Stephen Frears is back on his favourite territory, with a story focusing on a strong, older woman: think The Queen and Philomena. But while it was more than apparent what made those ladies tick, it’s less clear here and we never fully understand why she actually believed she could sing. While the film mixes humour and pathos with warmth and affection, the loose ends are never totally tied up, making for a touch of frustration at the end.

Florence Foster Jenkins is released in cinemas on Friday, 6 May and reviewed on Talking Pictures on Thursday, 5 May 2016.

Tags:  Florence Foster Jenkins Hugh Grant Into The Woods Mama Mia Meryl Streep Nicholas Martin Philomena Simon Helberg Stephen Frears The Queen
This entry was posted on Tuesday, May 3rd, 2016 at 11:01 am and is filed under Movies. You can follow any responses to this entry through the RSS 2.0 feed. Both comments and pings are currently closed.