I recently attended a screening of Father Stu – a new release from Columbia Pictures, distributed by Sony Pictures. The story is largely based on the true story of a boxer turned priest, who is then diagnosed with an incurable muscle wasting disease, shortly after his ordination. 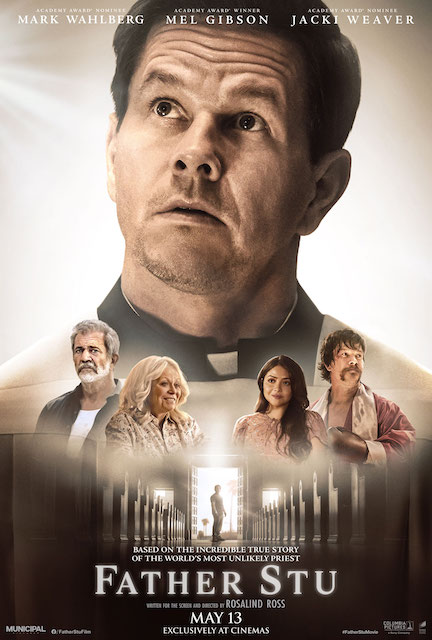 In the film, Mark Wahlberg plays Father Stu, with Mel Gibson and Jacki Weaver as his parents. The film starts with Father Stu, or Stuart Long as he is called at the start, fighting in a boxing ring in the manner of a prize fighter. We then follow his slightly fractious relationship with his mother, his struggles over the childhood death of an older brother, his fondness of drink and his eye for the ladies. A muscular and athletic Mark Wahlberg plays this to perfection, and shows Stuart Long as aggressive but with the gift of the gab. After one injury too many, Stuart moves to Los Angeles to seek his fortune as an actor, but instead meets the woman of his dreams, who happens to be a committed catholic.

One thing leads to another, and Stuart is baptised; but following a horrific crash on his motorbike, he decides to train as a priest, which means sacrificing his growing relationship with the woman he loves. His diagnosis of an incurable wasting disease occurs midway through his training, and we then follow his physical decline as he first gains his ordination and then in turn administers in the confessional to countless people. The story has many threads – principally it is of a young man, physically powerful but also charming and witty, but who cannot find a suitable outlet to his many talents; but in turning to the church finds the sense of purpose and belonging that he has hitherto missed. But it is also about the failed relationship with his father, who at the end finds his own redemption in caring for his slowly wasting son – the earlier intensely muscular frame now reduced to flab and jowls.

Mark Wahlberg must be the perfect choice of actor to play Father Stu – himself a committed Catholic, his early life was also marred by fighting and physical violence, and his career as a rapper shows his own gift of eloquence. I found the script by Rosalind Ross to be well crafted and witty, and the whole flowed easily from start to finish. My small criticism was the length of the film at two hours – I felt this could have been trimmed a little. However, this is a rewarding watch, and be prepared to shed a few tears.

This entry was posted on Saturday, April 30th, 2022 at 11:44 am and is filed under Movies. You can follow any responses to this entry through the RSS 2.0 feed. Both comments and pings are currently closed.