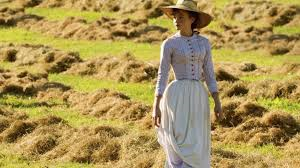 The setting is Wessex in the 1890s.  Independent Bathsheba Everdene (Carey Mulligan) has already turned down a proposal of marriage from local farmer Gabriel Oak (Matthias Schoenaerts) when she inherits a farm from her uncle and becomes a landowner in her own right.  Oak loses his farm and goes to work for her, disapproving of her flirtation with her neighbour, the wealthy Mr Boldwood (Michael Sheen) and her involvement with soldier Sergeant Troy (Tom Sturridge).  So which of the three men will she choose?

Taking on a classic like this could be an uphill task, so Vinterberg has tried to simplify things.  What that means is that he’s pared down the storyline to its bare essentials, concentrating simply on Bathsheba’s relationships with the men in her life.  So the rustic character and humour in the novel provided by the locals working on the farm is completely gone: they’re just a workforce, pure and simple.

But he’s trimmed it even further, so that some of most memorable big scenes from the book – Troy seducing Bathsheba through swordplay and the storm where Oak saves the harvest – appear deflated and have less impact than you would expect.  The eroticism in the scene between Bathsheba and Troy is feeble, despite being given an intense woodland setting, and the storm sequence appears to have no other purpose than to give Bathsheba another opportunity to flash a coy, girly smile at Oak and keep him dangling.  It’s as if the whole film has been drenched in cold water, turning the passion and intensity that should be there into something soggy and lukewarm. 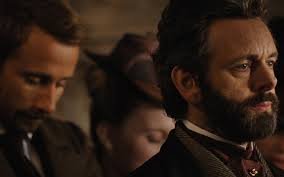 The men in Bathsheba’s life are a real mixed bunch.  Troy has always been the most challenging role and, unfortunately, Tom Sturridge is horribly miscast, giving a two dimensional performance of an ex-public schoolboy who fancies himself as Bathsheba’s toy boy.  Michael Sheen, on the other hand, tries something different as Boldwood, swopping brooding intensity for a twitchy, almost hyperactive man, living on the edge of his nerves.  It’s an interpretation that’s consistent with the concerns expressed about his mental stability, but it falls down when the obsessive side of his nature is revealed at the film’s climax.  Matthias Schoenaerts (Suite Francaise, A Little Chaos) isn’t the most obvious choice for the solid Gabriel Oak, but he’s probably the most successful of the three, especially at the moment when he loses his herd of sheep and, consequently, his farm.

While none of the male performances totally capture Hardy’s characters, Carey Mulligan is absolutely on the money as Bathsheba, bringing spirit, energy and conviction to the role.  And thank goodness for that, otherwise the film would have totally fallen apart.  She captures the essence of her character, with all her contradictions, capriciousness and occasional naivete and is an inspired piece of casting. 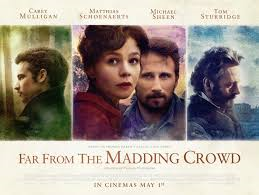 How you react to this version of Far From The Madding Crowd will depend on how well you know the novel and/or the original film.  If you come to it cold, you’ll have a romantic, nicely photographed, pastoral couple of hours.  If you know either or both of them, you’ll probably find it wanting.  And it is.  Thanks mainly to Carey Mulligan’s spirited performance, it does manage to stand up to its predecessors, but Vinterberg has over-stretched himself and it shows.

Far From The Madding Crowd is released around the UK on Friday, 1 May 2015.

Tags:  Alan Bates Carey Mulligan Far From The Madding Crowd Julie Christie Matthias Schoenaerts Michael Sheen Peter Finch Terence Stamp Thomas Hardy Thomas Vinterberg Tom Sturridge
This entry was posted on Thursday, April 30th, 2015 at 12:22 pm and is filed under Movies. You can follow any responses to this entry through the RSS 2.0 feed. Both comments and pings are currently closed.