Donkeyote is an award-winning documentary about the frail Manolo from Southern Spain who loves animals and nature walks with his donkey. A movie for a rainy Sunday afternoon this Autumn. 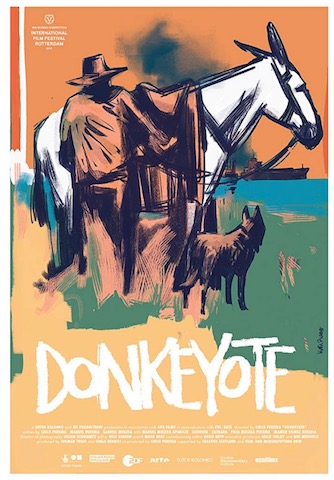 Manolo has a simple life in Southern Spain and two loves: his animals and wandering through nature. Against the advice of his doctor, he decides to plan one last walk in the US, the brutal 2200 mile Trail of Tears. But not without his donkey. Overcoming the small obstacle of shipping a donkey, Manolo’s chronic arthritis, a history of heart attacks, and his donkey’s fear of water are just a few matters to take care of. Will they find the American West? And more importantly, will they be able to see life as it is, and not as it should be?

Anything can become interesting if you stare it long enough. Pick any building in London and dig into its history; the people who own it, who used to live or work there and you’ll find a story worth telling. Or take something unassuming like a plastic bottle and you’ll find something you can use to make a larger point about society as a whole. If you stare at it long enough. In Donkeyote Chico Pereira picks the unassuming Manuel Morela Aparacio as his subject matter.

It starts quite slowly, with no talking for the first 15 minutes and no explanation of where the story is going for the first 30 minutes. However, it’s hard not to get drawn in by Manuel; he’s sincere, unassuming, kind, patient, loving and devoted to his animals. A man of simple pleasures. The life he leads could have been the same 100, 200 or 300 years ago; he has a little garden for vegetables and he goes everywhere on foot or on his donkey.

Unfortunately for him this means is that the world of 2018 is set up against him; when everyone is connected and documented and trackable, when there are rigid bureaucratic systems in place, a person like Manuel just doesn’t fit; he has a mobile phone, but he doesn’t even know the number for the emergency services; when he does speak to people on the phone no one believes him about his donkey; his daughter makes him go to the doctors -where he is hooked up to a treadmill and nearly has a heart attack after 5 minutes, even though he walks miles every day outside; his donkey needs a microchip in order to be allowed into America, but the vet can’t find it; in order to fund his trip to America he applies to a charity and spends all day making a video, only for no one to watch it and for his emails to go unanswered; and his friend tries to teach him English with a CD-ROM, but he can’t keep up with the pace. On top of all that along his journey to the port he is honked at by cars, overwhelmed by trucks, outpaced by trains and the one campsite he sleeps in has rowdy teenagers blaring music all night.

For someone so humiliated by modern technology I was wondering why he allowed himself to be followed around with a camera, but, as we discover towards the end, the filmmaker is his nephew, and this is his nephew’s way of showing his love for his uncle.

It’s not long before we love him too. His daughter loves him, his friends believe in him, and the strangers he meets on the road are all as charmed by him as we are, after we’ve spent a little time with him.

Is that the point of the documentary then? To remind us to slow down, to appreciate the simple things, to shed all the unnecessary baggage of modern life? In this ever-increasingly fast-paced world, where “social” means online instead of face-to-face, where nature is there to be instagrammed, and everything is quantified by how many likes it can get, it might not be a bad idea to slow things down and and smell the roses.

The original Don Quixote was a tragic figure; a parody who believed in legends of knights and chivalry and honour, a fool who thought he was a knight in shining armour on a noble steed. He is undone by the Knight of Mirrors – who forces Don Quixote to see himself as he really is; a confused old man running around in rusted armour. He is also perhaps most famous for mistaking windmills for giants and trying to kill them, and as the final scenes of this documentary are punctuated with wind farms, does this mean that Manuel Aparacio, our modern day Don Quixote, is also a mad old man? And if so, is his nephew his Knight of Mirrors? Or is Manuel meant to be an inspirational figure, someone we could all learn from? The romantic in me wants to believe that he is, but the cynic in me can’t help but think that maybe he is a tragic figure.

Is it worth going to go and see in cinemas? Probably not, but to rent for a rainy weekend afternoon, if you can convince the kids to settle down long enough, or to simply enjoy the animals, scenery and sweet old man, then it might be a nice way to digest a Sunday roast.

This entry was posted on Thursday, September 20th, 2018 at 11:26 am and is filed under Movies. You can follow any responses to this entry through the RSS 2.0 feed. Both comments and pings are currently closed.