Tearjerker family movie DOLPHIN TALE 2 hits UK cinemas on 3rd October 2014. This film continues the story of brave dolphin Winter, whose miraculous rescue and rehabilitation — thanks to the invention of a groundbreaking prosthetic tail — made her a symbol of perseverance to people around the world and inspired the 2011 family hit movie “Dolphin Tale.” Inspired by true events, the sequel follows the search for a female companion for Winter after the aquarium are told they will have to move the dolphin due to regulations which require these social creatures to be paired.  But as time runs out…there may still be Hope! 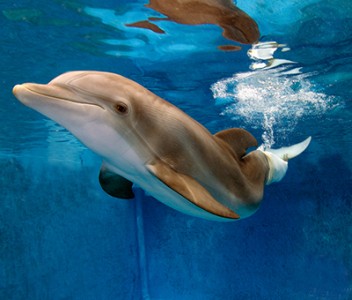 Personally I felt really emotional from the first couple of minutes as Winter is shown with her artificial tail and her great relationship with teenager Sawyer who takes care of her with such extraordinary sensitivity. Sawyer teaches both children and adults how animals should be uncompromisingly respected. 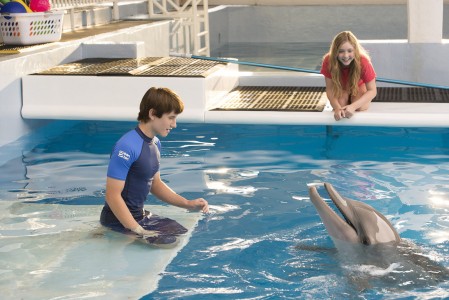 Here is our young reviewer Alessia’s feedback on the film. She is only 6 and we love her review! Click on the review image to read it in big characters. 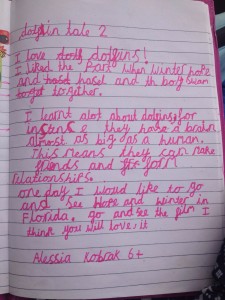 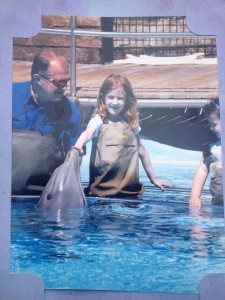 My own dolphin story

Dolphins’ films and any dolphins’ memorabilia in general are my thing but I have a great reason for being so fanatic about dolphins.

When I was a 5 year old girl in the 70s my dad took me to the biggest Dolphinarium in Italy based in Riccione and a newly rescued female dolphin of 6 years of age called Pele’ was introduced to the audience. At the end of a stunning playful show, Pele’ was asked to choose a child from the audience he wanted to take round on a little boat in the swimming pool. Pele’ signalled the choice of her favourite child with his tail by pointing at me sitting on my dad’s lap. I was thrilled and frightened at the same time. The dolphin insisted but I was too scared to accept. I have always regretted it. A few years ago when my child was 4 I went back to the newly built Dolphinarium Oltremare in Riccione and while I was telling him my story, the dolphins were introduced to the audience. You would never imagine how my jaw dropped when I heard that the main star was 40 years old dolphin Pele’. I found her again! She was still so lively and the presenter said that in her 34 years in captivity at the Dolphinarium she acted as a mother to all the dolphins who were rescued in the nearby Adriatic coast. I was so proud of her and so pleased to see her again.

This little story explains why I am still so emotional every time I watch a dolphin movie. 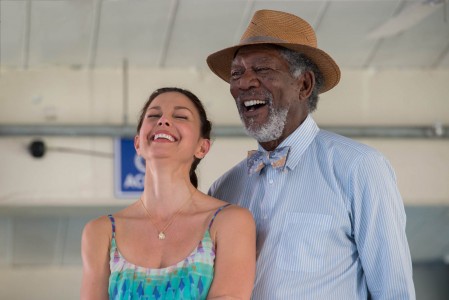 My personal story aside, Dolphin Tale 2 is a truly good movie and what we all liked so much was the fact that the stars were the actual dolphins who were rescued. At the end actual footage is shown of children with prosthetic limbs swimming with Winter and Hope. Both my 8 year old son and my friend’s 7 year old daughter enjoyed it. Morgan Freeman’s performance as the inventor of the dolphin’s prosthetic tail is great too. He never disappoints me. 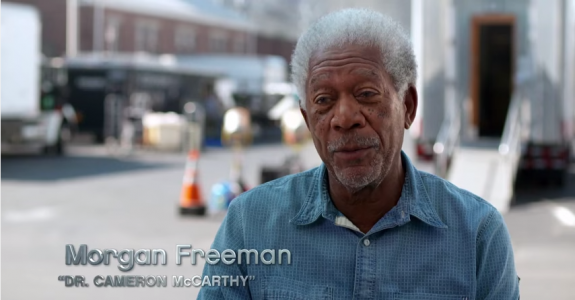 View the Gavin DeGraw ‘You Got Me’ music video and hear from the cast and crew including Harry Connick, Jr. and Oscar® winner Morgan Freeman (“Million Dollar Baby”), along with Oscar® nominees Andrew A. Kosove and Broderick Johnson (“The Blind Side”) who are producing the film together with Alcon President of Worldwide Marketing, Richard Ingber, in these two behind the scenes featurettes which also contain archival footage from Clearwater Marine Aquarium and exclusive clips from the new movie.

Check the website of Clearwater Marine Aquarium (Florida) where Winter and Hope live.  You can watch them live through real-time webcams. That is a much better Big Brother show!

A bit more ‘behind the scenes’ information

Warner Bros. Pictures and Alcon Entertainment’s “Dolphin Tale 2” continues the story of the brave dolphin Winter, whose miraculous rescue and rehabilitation—thanks to the invention of a groundbreaking prosthetic tail—made her a symbol of perseverance to people around the world and inspired the 2011 family hit movie “Dolphin Tale.” 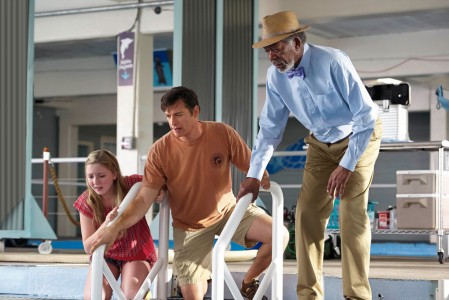 Several years have passed since young Sawyer Nelson (Gamble) and the dedicated team at the Clearwater Marine Aquarium (CMA), headed by Dr. Clay Haskett (Connick, Jr.), rescued Winter, a young dolphin who lost her tail after being entangled in a crab trap. With the help of Dr. Cameron McCarthy (Freeman), who developed a unique prosthetic tail for Winter, they saved her life against all odds. In turn, she helped save the Aquarium—as people came from far and wide to see the courageous dolphin firsthand, enabling CMA to greatly expand their mission to “rescue, rehabilitate and, when possible, release” injured animals. 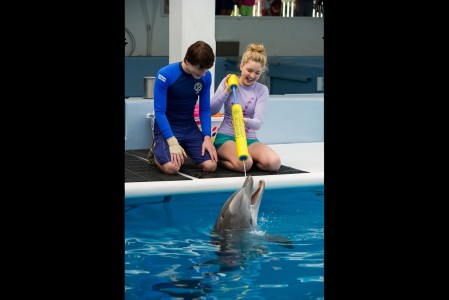 Yet their fight is not over. Winter’s surrogate mother, the elderly dolphin Panama, passes away, leaving Winter alone and grieving, unwilling to engage with anyone, even her best friend, Sawyer. However, the loss of Panama may have even greater repercussions for CMA. The USDA warns Clay they will have to move Winter from the Aquarium because regulations require these social creatures to be paired. If they don’t find a female companion for her—one that she accepts—CMA will lose their beloved Winter.

But as time runs out, there may still be Hope… 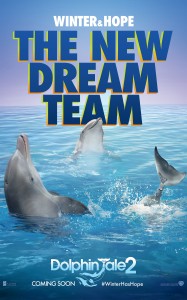 Oscar nominees Andrew A. Kosove and Broderick Johnson (“The Blind Side”) produced the film, together with Alcon President of Worldwide Marketing, Richard Ingber, who brought the first project to the Company, and Steven P. Wegner. David Yates and Robert Engelman served as executive producers. 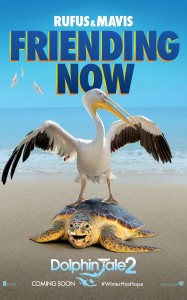 Inspired by true events, “Dolphin Tale 2” was filmed at the Clearwater Marine Aquarium, the non-profit rescue and rehabilitation facility that Winter calls home. It is now also home to Hope, the baby dolphin that was rescued the very night of the first film’s wrap party. As the cast, filmmakers, crew and CMA staff celebrated the completion of photography on “Dolphin Tale,” CMA received word of a baby dolphin that had been rescued and was on its way to the facility, though she was so young there were fears she would not survive the trip. When the van carrying the newly named Hope arrived at CMA, several members of the cast and filmmaking team were on hand to witness her being hand carried to the pool—a scene closely re-created in the film. Hope not only survived but, thanks to the efforts of the CMA team, thrived. Like Winter, Hope can never be released to the wild, as she was too young to have learned the life skills necessary for survival. Instead, the two dolphins have formed their own small “pod” and become part of the family at CMA, where they inspire visitors from all over the globe.

This entry was posted on Sunday, September 21st, 2014 at 11:50 am and is filed under Movies. You can follow any responses to this entry through the RSS 2.0 feed. Both comments and pings are currently closed.