Adopted as an orphan, Yuri Zhivago (Omar Sharif) graduates as a doctor and, in his spare time, is a moderately successful poet.  He marries Tonya (Geraldine Chaplin) but Russia’s involvement in the First World War means he’s sent to the front.  There he meets a nurse, Lara (Julie Christie), somebody he has nearly met on several occasions.  They fall in love but the advent of the Russian Revolution means Yuri has to return home to what’s left of his home and family.  But he and Lara won’t be parted for long ……

That summary of the story is very much a simplified version.  There’s a huge cast of characters whose stories and lives are woven into the fabric of the film, from Pasha (Tom Courtney), the idealistic student engaged to Lara to Yuri’s brother Yevgraf (Alec Guinness), a high ranking officer in the Red Army and Alexander (Ralph Richardson), Tonya’s father who is still loyal to the Tsar.  And there’s not just an extensive cast of characters: there’s some heavyweight actors in there as well, including Rod Steiger, Rita Tushingham and Klaus Kinski.

All of which leads you to expect some great acting.  You get it, but perhaps not as much as you might have hoped for.  While Peter O’Toole was originally in contention to play Zhivago, the part went to Sharif, his Lawrence Of Arabia co-star, and his huge brown eyes are regularly in close up.  In fact, they’re so often the focus of the camera, often with the lower half of his face in shadow, that it implies a lack of confidence from director Lean in his leading man.  Sharif certainly has the looks and a certain screen presence, but his acting range comes into question and there are moments when he looks shaky, especially in his final scenes.

The camera loves Julie Christie’s eyes as well – huge and blue this time – but with her shiny hair and pale lipstick, she looks more like a 60s model than a young woman who is something of a survivor.  The best performances come in the supporting roles, from Tom Courtney, especially when his idealistic student becomes a revolutionary commander, and Rod Steiger as the unscrupulous and amoral Komarovsky, who has a remarkable talent for survival, regardless of the colour of the government.

Where the film scores, however, is in its photography.  It is simply a feast for the eyes – staggeringly good for its day – and it demands to be seen on the big screen.  There’s no other way to fully appreciate Freddie Young’s cinematography.  There’s the huge panoramic scenes, such as the funeral at the beginning, a near-frozen Zhivago staggering through the snow to get home and the troika ride to the deserted country house across a frosted landscape.  But the smaller scenes are equally beautiful and full of intricate detail, such as the wintry etchings on the windows and Lara’s mother’s workroom.

Doctor Zhivago is very much a Hollywood film, painting an idealised picture, regardless of the severity of the conditions it portrays, and that makes it hard to ignore its incongruities.  Both Lara and Tonya are blessed with the talent to turn a complete wreck of a house into comfortable living quarters for themselves and their man in almost the blink of an eye.  And somehow they’re never short of food, even in the depths of the Russian winter and when they’re living miles from anywhere in the vast countryside.  You just have to suspend your disbelief. 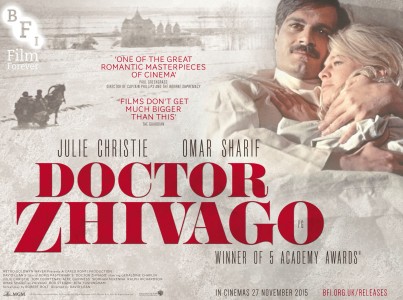 Despite the film’s shortcomings, seeing Doctor Zhivago on the big screen is worth the time, effort and money.  It’s an epic romance, one to wallow in and simply enjoy.  As it approaches its 50th birthday, it stands up remarkably well, especially as far as the photography is concerned.  And, while it may not be David Lean’s very best film, it certainly shows that there was – and is – nobody to beat him when it comes to choosing a strong story and telling it with clarity.

The newly-remastered Doctor Zhivago is released at selected cinemas around the country from Friday, 27 November.  It will be reviewed on Talking Pictures on Thursday, 26 November 2015.