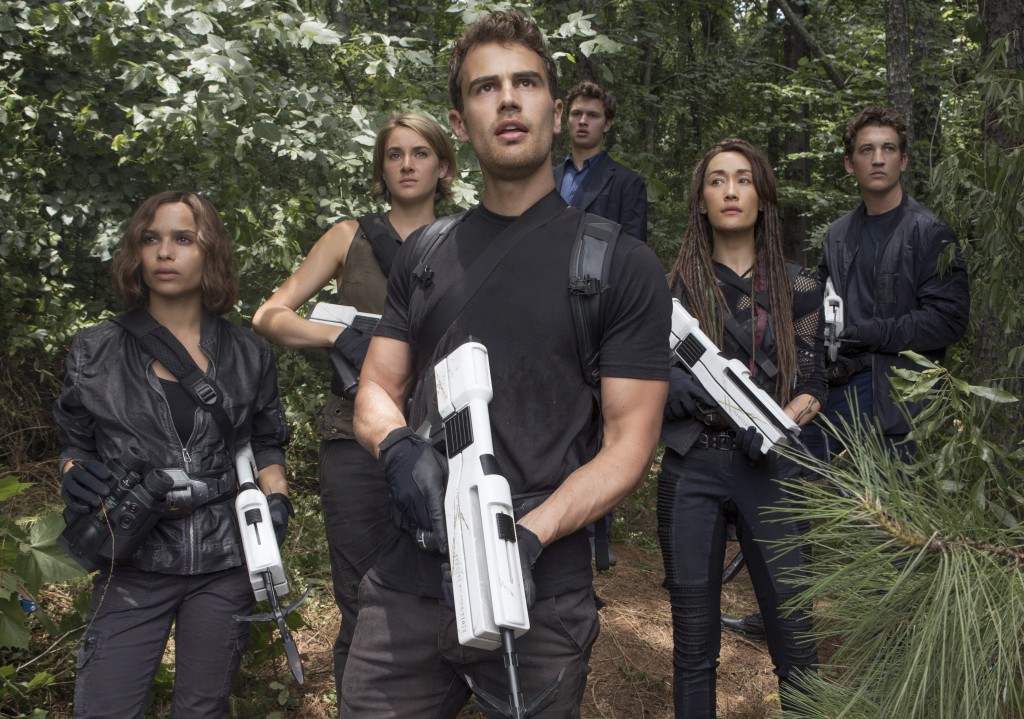 In post-dystopian Chicago, the previous dictator has been overthrown and the faction system that held the city together is starting to crumble. Now Tris (Shailene Woodley) constantly wonders what is on the other side of the wall surrounding the city so, along with Four (Theo James), Peter (Miles Teller) and others, she decides to find out. They discover the Bureau of Genetic Welfare, where the conflict they’re used to is non-existent and the faction system is gone. The Director of the Bureau singles out Tris to play a key role in his latest and most important mission but, at the same time, other members of her team are discovering that the Bureau isn’t all that it seems.

The makers would have you believe that Allegiant is a natural extension of Insurgent, the previous episode in the series. That the characters are now ready to venture outside the city to find a whole new world and an even bigger adventure. What’s apparent from seeing the film is that this is a franchise fast running out of steam and ideas. With the faction system of the first two films gone, Tris and Co need to find a new enemy somewhere else, so there’s only one thing to do. Get out of town. And, as if to make it even more obvious that the ideas are drying up, traces of other YA franchises sneak in. True, Divergent has always been a Hunger Games clone, and an inferior one, but now that wall surrounding Chicago is more than a little reminiscent of The Maze Runner.

The story has moved on to a certain extent and there’s some definite changes from last time. We’re reminded constantly that “Jeanine is dead!”, which means no more Kate Winslet in her tottering high heels. The cast list needs a star name to replace her and this time it’s cuddly Jeff Daniels as the Director of the Bureau. He may look benevolent and kindly but, as in all YA films, older people simply aren’t to be trusted and, even though he’s invented some very cool pieces of kit – the dinky saucer shaped little drones are decidedly handy – his bigger plan isn’t really good news for anybody.  Especially as it involves a bright orange memory erasing serum. 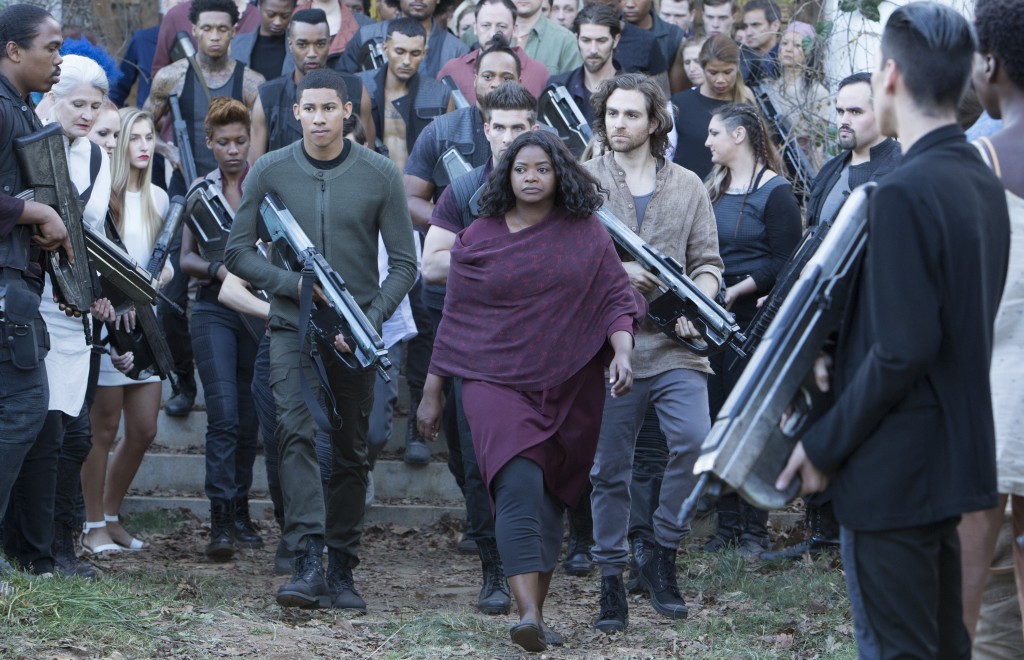 Some characters have undergone changes as well. Evelyn (Naomi Watts), Four’s mum and one-time faction leader, has seized power and is fast becoming a power hungry dictator like her predecessor. Johanna (Octavia Spencer), wise leader of the Allegiant faction, has now become Evelyn’s arch enemy and is more than prepared to go to war against her former ally. But most disappointing of all is what’s happened to Peter (Miles Teller), the morally ambiguous member of Tris’ gang. Until now he had some complexity but now he’s just reduced to a would-be comic villain, delivering lines that are intended as wisecracks but are just limp and unfunny. 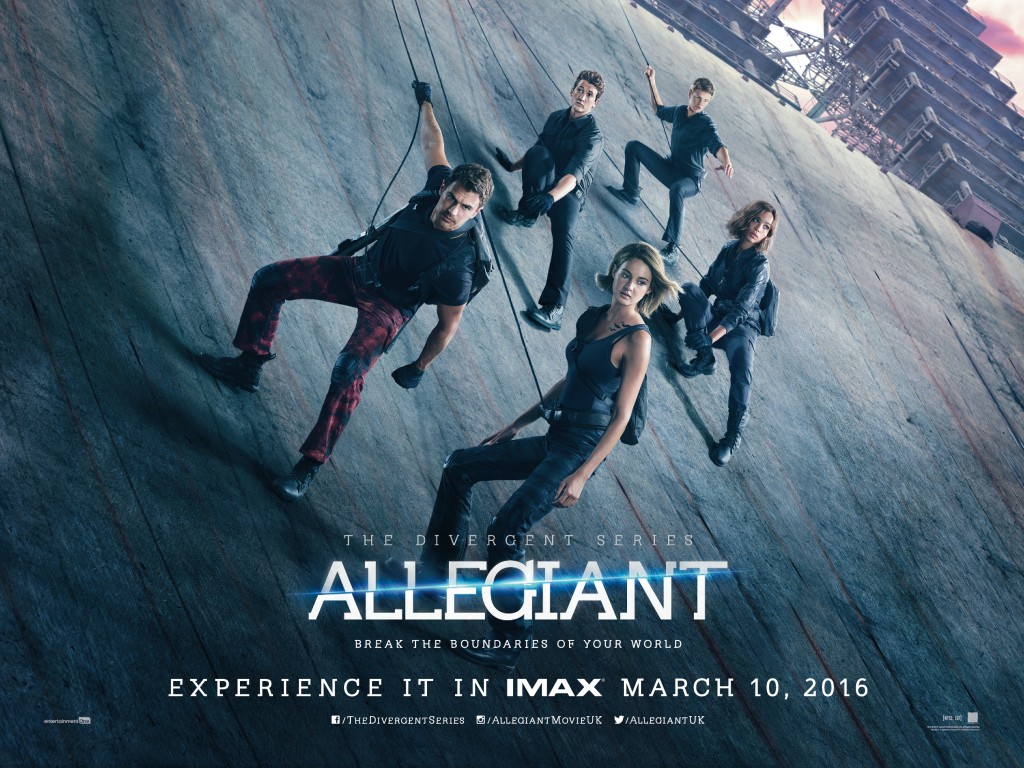 To use the scientific language of Allegiant, the Divergent series is on a downward trajectory – and this is the weakest of the lot. It’s all been done before and, in The Hunger Games, it’s been done better as well. Apparently there’s a new director lined up for the final instalment in the series, Ascendent, which is released next year. With any luck, he’ll give the fading franchise a much-needed shot in the arm but, as far as this episode is concerned, I wouldn’t mind a quick sniff of that orange serum to wipe out my memories of it.  Assuming I have any ……..

Divergent:Allegiant is released in cinemas on Thursday, 10 March 2016 and will be reviewed on Talking Pictures on the same day.

Tags:  Ascendent Batman Divergent:Allegiant Insurgent Jeff Daniels Kung Fu Panda 3 Miles Teller My Big Fat Wedding 2 Naomi Watts Octavia Spencer Shailene Woodley Superman The Hunger Games The Maze Runner Theo James
This entry was posted on Monday, March 7th, 2016 at 8:19 pm and is filed under Movies. You can follow any responses to this entry through the RSS 2.0 feed. Both comments and pings are currently closed.