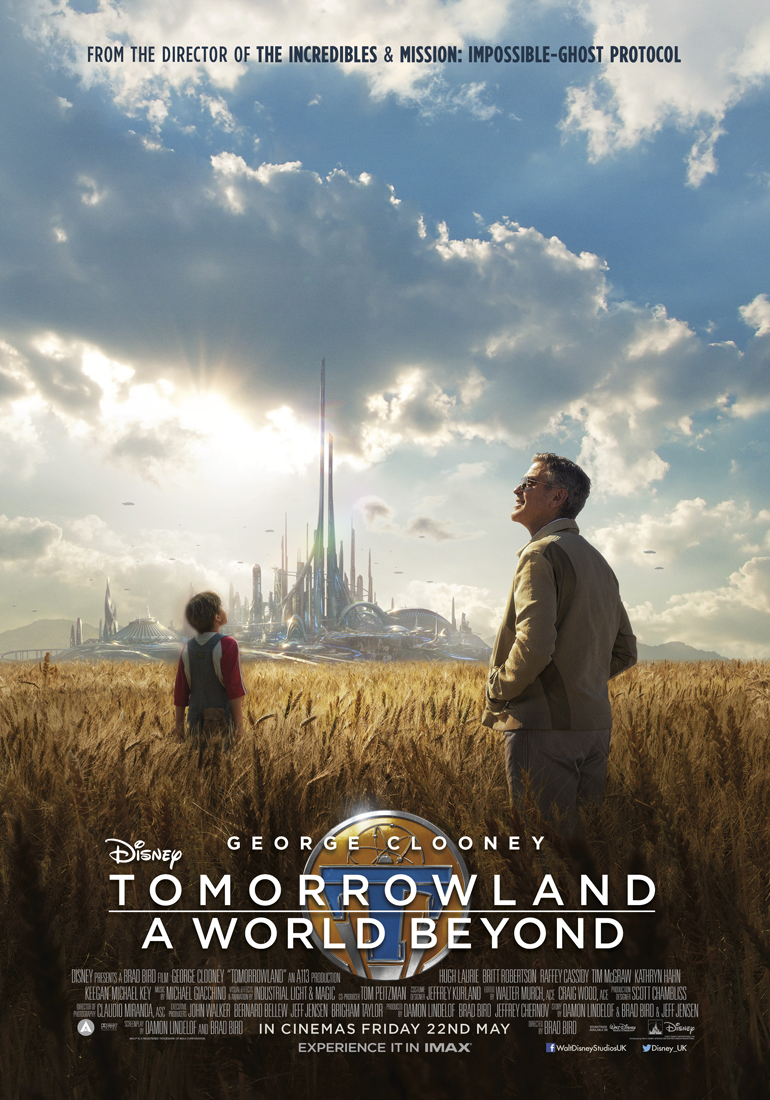 Bound by a shared destiny, former boy-genius Frank (George Clooney), jaded by disillusionment, and Casey (Britt Robertson), a bright, optimistic teen bursting with scientific curiosity, embark on a danger-filled mission to unearth the secrets of an enigmatic place somewhere in time and space known only as “Tomorrowland.” What they must do there changes the world—and them—forever. 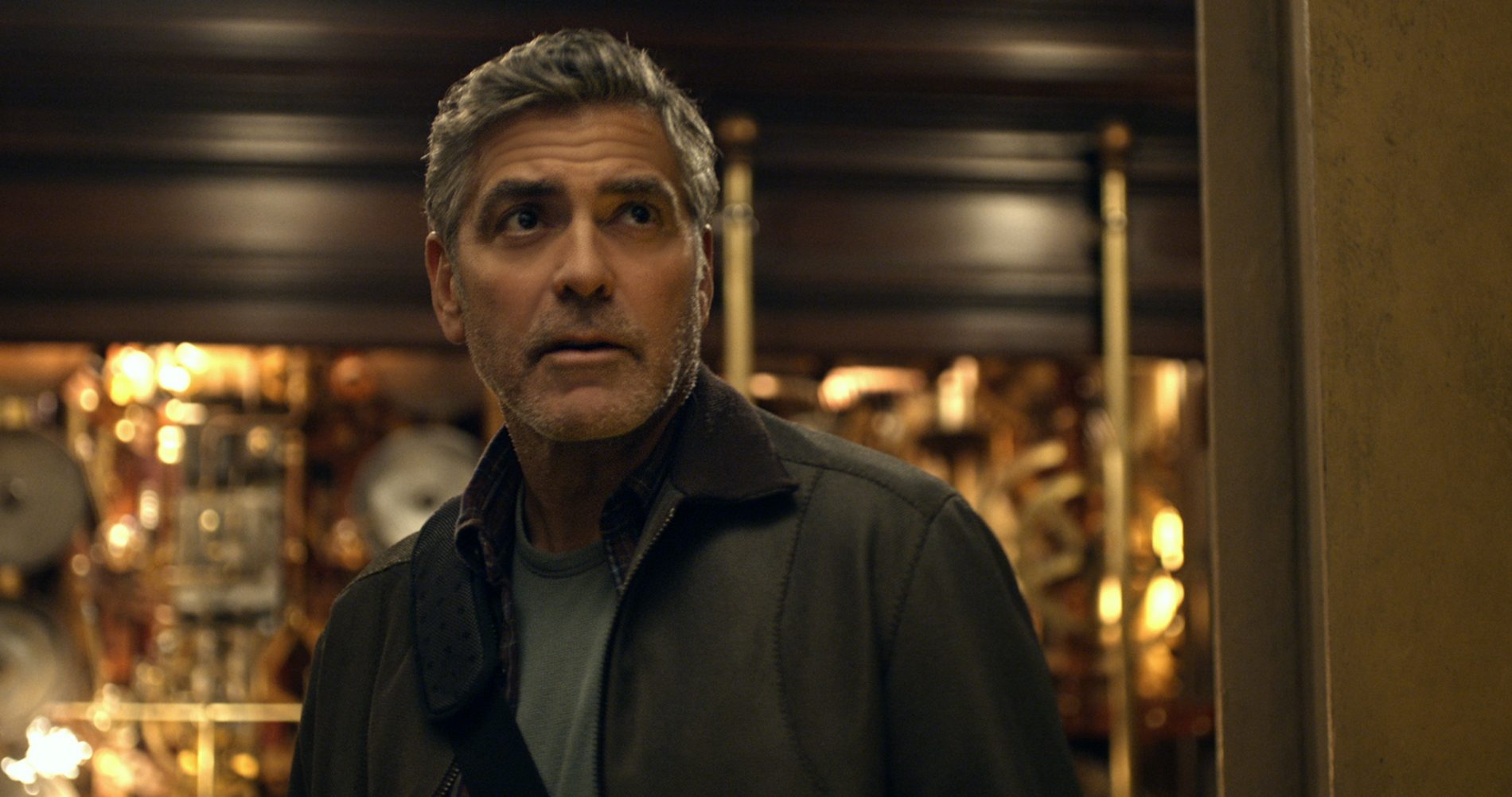 Two-time Oscar® winner Brad Bird (“Mission: Impossible – Ghost Protocol,” “The Incredibles”) and Damon Lindelof (“Star Trek,” “Star Trek Into Darkness”) had only one man in mind to play the disillusioned inventor Frank Walker: George Clooney. “From very early on we described Frank as George Clooney-esque,” recalls Lindelof, “and whenever we would talk about actors for Frank, the thinking was: who’s like Clooney? We crossed our fingers and did our best job of writing it, infusing Frank with a curmudgeonly humor and a heroic quality, all of which we think George embodies. And then we sent it off into the universe.”

There’s something about George Clooney that makes him so attractive and a success magnet. Well, first of all he is a very handsome ‘salt and pepper’ man who gets better and better over the years. At 55 he’s more charming than ever. 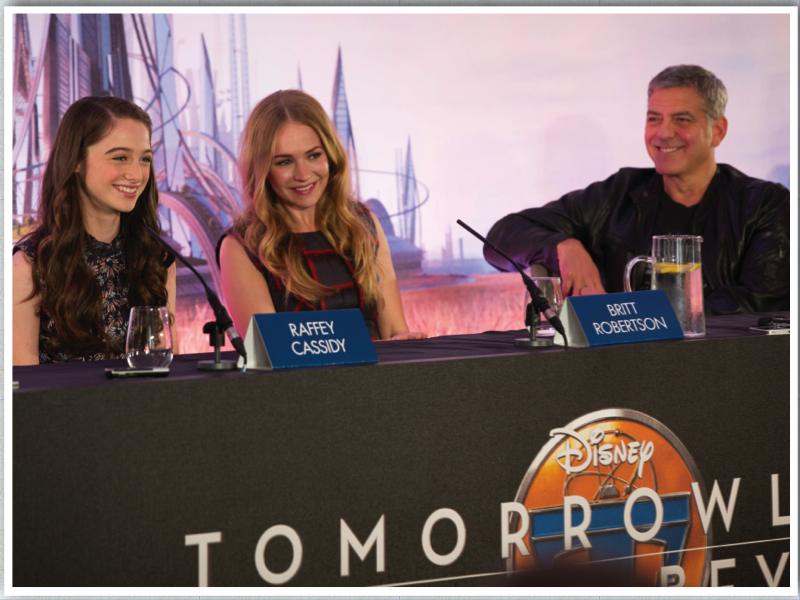 During my interview with young actresses Britt Robertson and Raffey Cassidy, they revealed that George was the only actor who did not wear make-up during the filming and who did not have a hairdresser on set. He is an alpha male but also very fascinating and witty as he showed his funny side during the European press conference at London Claridge’s Hotel on 18th May. 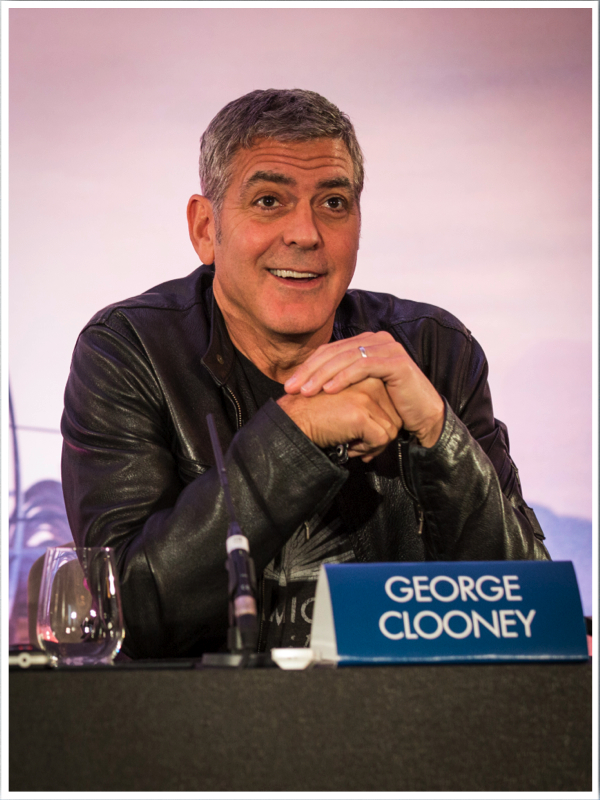 George Clooney is perfect for the role of Frank Walker as he is an activist and strongly believes in a better future.  He recalled being a child in the Sixties like his character Frank and described him as “a disenchanted grump who was a bit of a dreamer as a young boy, a smart little scientist kid. Young Frank goes to a place that he thinks is the greatest in the universe and he believes the world is going to be much better off because of it. He finds out that those things were untrue and becomes probably the most cynical person one could be. He isolates himself on his family farm and plans to spend the rest of his life there but is forced to deal with his past because of situations that happen in the film.”

Asked what he thought humans should do to create a better tomorrow, George said that he would love people to socialise more and interact with each other more rather than just through their smartphones. Being a child of the Sixties, he knows best and I totally agree with him (read my digi detox piece if you want to know how to chillax).

Disney’s Tomorrowland starts with an amazing set up and seems extremely promising but after the first hour you have the impression that there won’t be an ending after all. The closure is not in sight for a while and kids would probably get a bit bored at that stage especially those under 12. But then the story speeds up again and the second part of the movie makes sense. Geeky children like my 8-year-old son would absolutely love it especially if they are into science, inventions and futuristic technology. The scene with Paris as the backdrop is superbly shot with a lot of well designed CGI animations to show the Eiffel Tower opening up to reveal a rocket.

This is a massive year for Disney. We’ve already had the Oscar winning Big Hero 6, Cinderella having a ball and Avengers:Age Of Ultron saving the world in spectacular style. There’s plenty more on the way – Inside Out, which recently wowed the critics at Cannes, and Star Wars:The Force Awakens at the end of the year. So I guess they’re allowed a blip. 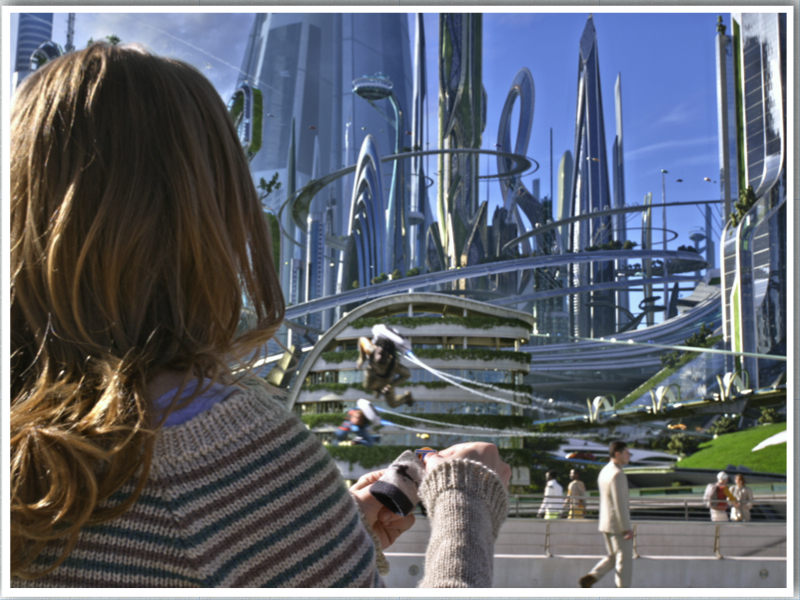 That’s not to say Tomorrowland: A World Beyond is a bad film. It’s not, but I found it really hard to get involved with it and it took me a while to work out why. It’s too long for a family film at 2 hours 10 minutes, but that wasn’t it. Nor was it the fact that its vision of the future is still anchored in the 60s. It’s all to do with the origin of the film, which is Tomorrowland at Disneyland in California. Using a theme park ride as the inspiration for a film is fine if all you’re making is adventurous fun, like Pirates of the Caribbean. But if you want to make something more thoughtful and scientific, you need something more – and something more original – than a section of a theme park. The whole thing is back to front and the feeling that you’re watching a massive Disney ad doesn’t help.

But I did say that it isn’t all bad. The special effects are, as you would expect, impressive and 13 year old Raffey Cassidy is a real find as Athena. She has remarkable presence and composure in front of the camera and is definitely somebody to watch out for. It also takes a positive, optimistic view of the future, which makes a refreshing change. As a whole, though, it still feels like a commercial for Disneyland and Disney values – and, when your company bestrides the movie world like a colossus, any glitch, however small, is going to be all-too-obvious.

Tomorrowland A World Beyond is set to blast into cinemas on 22 May 2015. Watch this space as we will publish an exclusive interview with young British actress Raffey Cassidy in the Summer issue of the London Mums Magazine out mid June.

The inspiration behind Tomorrowland

Tomorrowland was created by Walt Disney as a section of Disneyland in 1955. It was a time when Americans imagined an optimistic future. Over the years since, the public’s view of the future grew dark. Filmmakers and co-writers Brad Bird and Damon Lindelof told us in an interview that they looked for what Tomorrowland meant and how it could be represented in a storyline that recaptured that earlier optimism.

The story of “Tomorrowland A World Beyond” started with a box labeled “1952,” supposedly discovered by accident in the Disney Studios archive. The mystery box contained all sorts of fascinating models and blueprints, photographs and letters related to the inception of Tomorrowland and the 1964 World’s Fair. Lindelof was excited by the find and recalls, “I began to imagine that the contents of the box were a guide to a secret story that nobody knew. But if so, what would that story be? And the most obvious answer to me was that there really was a place called Tomorrowland that was not a theme park but existed somewhere in the real world.” 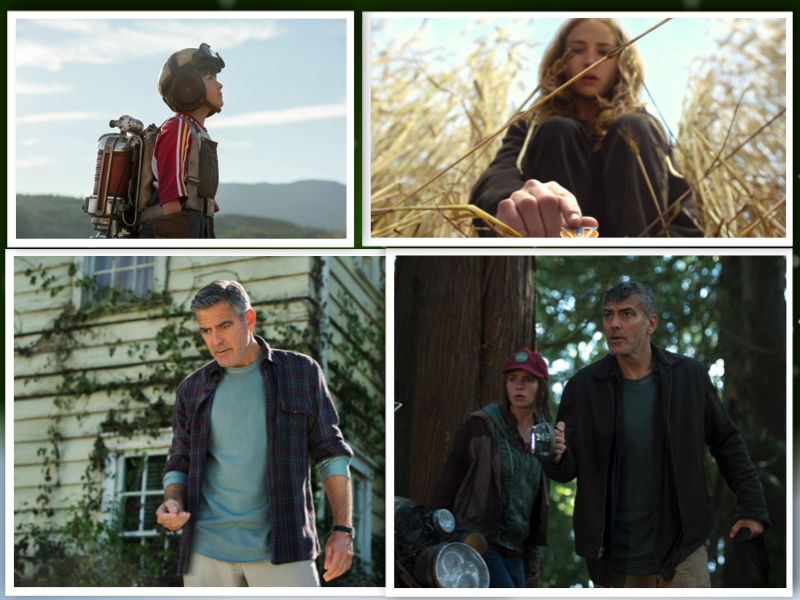 Lindelof began to develop the story by researching the history of Disney and its originator, which led to research on the company’s involvement in the 1964 World’s Fair. “Walt Disney was a futurist in that real mid-century modernist sense,” says Lindelof. “He was very optimistic. He believed that technology held the key to building a better world. He also believed in technology as a means of creating great entertainment. For the 1964 World’s Fair, the Walt Disney Company created three rides, the It’s a Small World ride being the one we remember most. Though quaint by today’s standards, back in 1964, Carousel of Progress and Great Moments with Mr. Lincoln were revolutionary in how they used robotics and ride technology to create a thematically rich experience.”

Lindelof adds, “And there was also an underlying radical optimism. This was 1964, the world had just flirted with thermonuclear catastrophe as a result of the Cuban Missile Crisis, and the song ‘It’s a Small World’ was written in response to a world that had walked right up to the brink of nuclear war but had pulled back and was now pining to recognize that we don’t have to destroy ourselves.”

The success of the World’s Fair allowed Disney to raise funds for his next great project, the Experimental Prototype Community of Tomorrow, or Epcot. Disney’s vision was for a model city that would be an ongoing experiment in urban development and organisation; it was to be a real Tomorrowland where technology wed urban planning to create an optimal living environment. Walt Disney died, however, before Epcot could be built, and the Disney Company decided it did not want to run a city without his input. The model community concept was modified to become a large “permanent World’s Fair” instead, with two small residential districts for employees and their immediate family members. The park still exists today in Lake Buena Vista, Florida.

Executive producer Jeff Jensen, who is credited with story by with Bird & Lindelof, defines “’Tomorrowland’ as a quintessential Disney movie,” including all the values of Walt Disney: amazing special effects, very innovative storytelling and evolving ideas for the future. Tomorrowland is indicative of the can-do, Right-Stuff spirit of the Space-Race fifties and sixties, when ‘there was this feeling that the future was something that could be built, that we could make things better, technologically, politically, and socially; we could make a better world’.

Tags:  Brad Bird Britt Robertson Damon Lindelof George Clooney Raffey Cassidy
This entry was posted on Wednesday, May 20th, 2015 at 11:00 am and is filed under Movies. You can follow any responses to this entry through the RSS 2.0 feed. Both comments and pings are currently closed.