Disney Pixar’s Coco is a blast of colours and lively music in the middle of the January blues and will take all moviegoers (young and less young) to an unforgettable fun journey into the land of the death that leads to a real family reunion. Coco is released in UK cinemas on 19 January 2018. 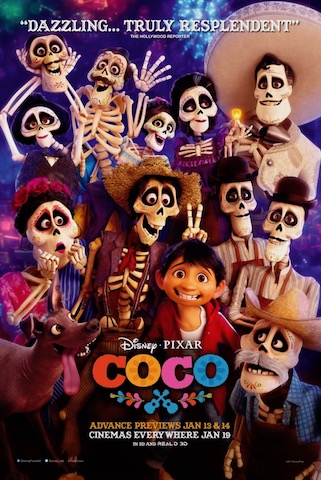 The story (no spoilers)

Despite his family’s generations-old ban on music, young Miguel dreams of becoming an accomplished musician like his idol Ernesto de la Cruz. Desperate to prove his talent, Miguel finds himself in the stunning and colorful Land of the Dead. After meeting a charming trickster named Héctor, the two new friends embark on an extraordinary journey to unlock the real story behind Miguel’s family history.

Coco is about a Mexican boy who has a passion for music but he has not the approval of his family to pursue his dream of becoming a musician like his hero Ernesto de la Cruz because of a family ‘curse’.

HIDDEN TALENT – Miguel creates a secret space where he can play his guitar and soak up the on-screen talent of his idol, Ernesto de la Cruz.

The main story takes place during the Day of the Dead, when according to Mexican tradition, the departed are allowed to re-enter the living world temporarily in a ghostly shape.

ASPIRING MUSICIAN — In Disney Pixar’s Coco, Miguel (voice of newcomer Anthony Gonzalez) dreams of becoming an accomplished musician like the celebrated Ernesto de la Cruz (voice of Benjamin Bratt). But when he strums his idol’s guitar, he sets off a mysterious chain of events.

The grandmother running  the family traditions would like her grandson Miguel to become a shoemaker like all the other family members.

DON’T FORGET THE SHOES – Abuelita (voice of Renée Victor) and Miguel (voice of Anthony Gonzalez) ensure that their home is adorned for Día de Muertos, including an elaborate ofrenda that holds several framed family pictures, flowers, candles, favorite foods and—because they are in the shoemaking business—shoes.

After many adventures across the afterlife, Miguel and his loyal four legged friend doggy and ghostly new friend Hector, he manages to lift the curse. 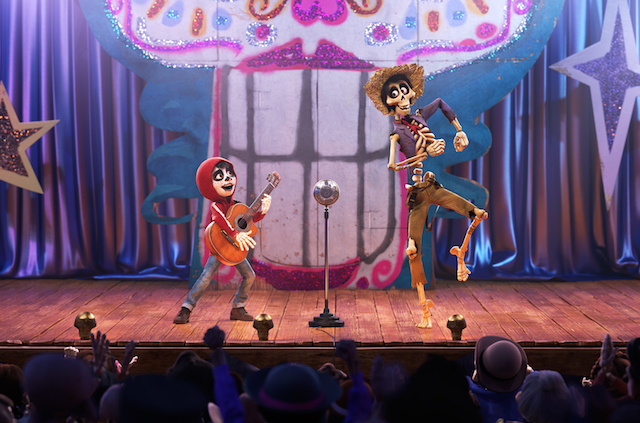 UN POCO LOCO – Aspiring musician Miguel teams up with a charming trickster named Héctor (voice of Gael García Bernal) to unravel a generations-old family mystery. Their extraordinary journey through the Land of the Dead includes an unexpected talent show performance of “Un Poco Loco,” an original song in the son jarocho style of Mexican music written by co-director Adrian Molina and Germaine Franco for the film.

There’s a twist in the end, a positive resolution of the family curse. But I won’t reveal it to make it more fun for you.
I saw Coco with two 11 year old boys who were glued to the big screen from start to finish. It’s one of those films that works on so many levels, adults will take something different from it than the kids. The pre-teens loved it more than me and were never bored. Another mum said that Coco is better than Zootropolis which for me was quintessentially Disney! Although I don’t agree with this, I have to say that Coco is a very well made film – unsurprisingly it took six years to make – with richness of details unseen before in a family animation movie. 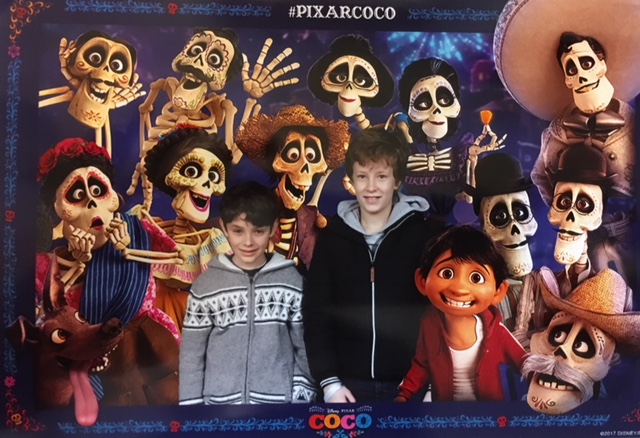 I have been rarely disappointed by Disney Pixar – with the exception of maybe Brave and Inside Out – and Coco is the latest work of art of the genius minds of the Pixar visual artists and storyteller. You understand from the first scenes why Coco has taken so long to make. The level of details in every shot is incredible.  The innovation that we experience watching Coco are  subtle and can be seen in the human bones and the orange flower petals which look real. The colours are so vivid, deep and tantalising. 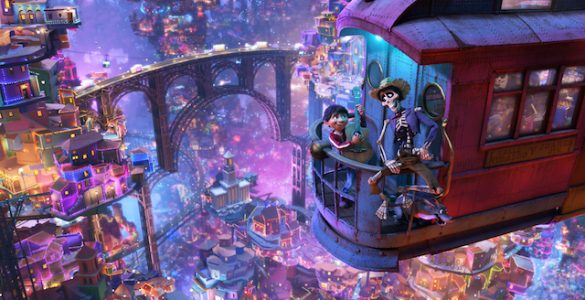 UNLIKELY DUET — Miguel teams up with charming trickster Hector (voice of Gael García Bernal) on a life-changing journey through the Land of the Dead. Coco is irected by Lee Unkrich, co-directed by Adrian Molina and produced by Darla K. Anderson.

The Frida Kahlo-inspired musical gig which shows dancing papaya seeds is extraordinary. The whole movie with plenty of references to Mexican traditions and art is a big shout out to the wonderful ancient Mexican culture which has been mistreated in recent years and particularly by the the Trump administration. Mexico is one of the most fascinating countries and cultures I have ever known so I am glad it is now brought back to life in such a glorious way. Hats off for Disney Pixar that has done such a great job trying to educate young and older crowds with a fun movie.

Despite covering death in all its aspects, the film is not scary. A couple of younger kids were a bit scared to see skeletons at first, but they quickly warmed up to their personalities. The plot will keep everybody glued to their seats with its twists and turns. There is a murder (revealed at the end) and accidental death, but the afterlife in Coco is a lovely busy place, which is not creepy at all, in fact it is quite funny.

The sidekicks who accompany Miguel in his reverse journey in the land of the dead are super-excited and greedy street dog Dante and forgotten ghost musician Hector (voiced by Gael García Bernal).

MARIGOLD BRIDGE — Miguel desperately wants to prove his musical talent. But when he strums the guitar of his idol, the late Ernesto de la Cruz, Miguel sets off a mysterious chain of events and finds himself—and his loyal dog Dante—crossing into the Land of the Dead via a breathtaking bridge made of marigold petals. 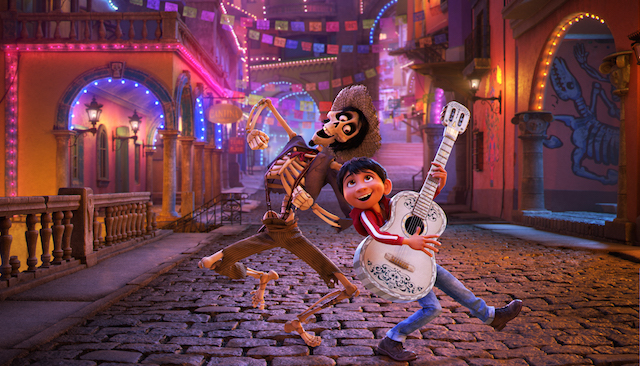 NAME THAT TUNE – Miguel’s love of music ultimately leads him to the Land of the Dead where he teams up with charming trickster Hector. “Coco” features an original score from Oscar®-winning composer Michael Giacchino, the original song “Remember Me” by Kristen Anderson-Lopez and Robert Lopez, and additional songs co-written by Germaine Franco and co-director/screenwriter Adrian Molina. Also part of the team is musical consultant Camilo Lara of the music project Mexican Institute of Sound.

The main star of the movie has to be the mariachi music, which I love but which has been relegated to boring local folklore. I am glad Disney Pixar is rehabilitating this genre with upbeat mariachi songs and some revival of some of my all-time favourite songs such as La Llorona.

If you were wondering why the film is called Coco, that is the name of Miguel’s great-grandmother, who turns out to be the heart of the story. I won’t be revealing more as I would have to spoil it for you.

MAGIC – When Miguel finds himself in the Land of the Dead, all he needs to return to the Land of the Living is a blessing from a family member, a magical marigold petal and a promise he’s not sure he can make.

Coco movie is a class movie that made me laugh a lot, think and even cry (a bit) in the end. When I shed a tear, I rate the film highly. Coco deals with death and loss in a poetic way and is not traumatic at all for young children. 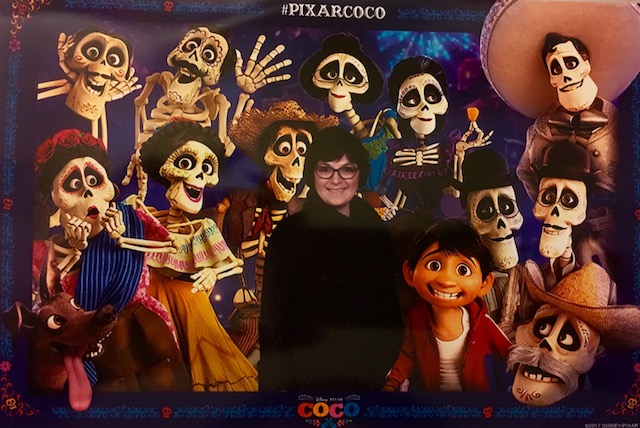 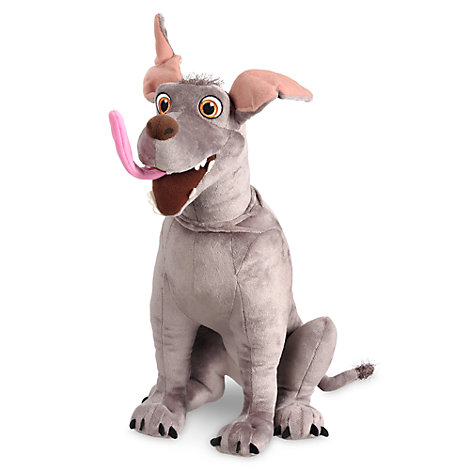 One of the kids’ favourite characters from Coco was Dante, Miguel’s lively pet dog in his true canine form, with a sprout of hair on his head and his wild tongue wagging all the time. This plush is huge (H40 x W20 x D34cm approx) although described medium. This lovely plush is crafted in fine detail and has 3D tongue which you can move in different positions, and a fun expression. It stands on its own too. RRP £19.99 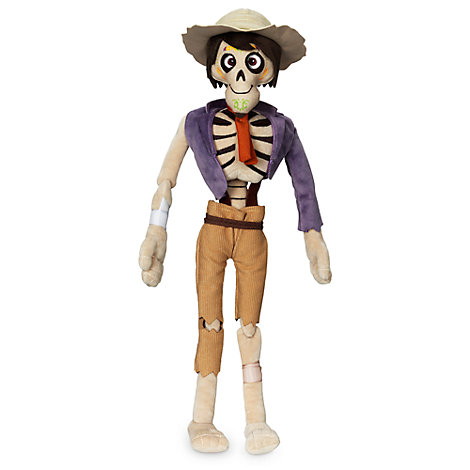 Hector is a fun character all children will fall in love with after watching the movie. He’s a quirky and creative musician and is ready to help the hero Miguel escape the Land of the Dead, in his tattered trousers and one armed jacket! The plush features intricate character embroidery and beautiful artwork on his face. My son said that it is good to learn anatomy for his science lesson as you can see how the skeleton works. It is indeed very detailed. It is also quite big for being described as medium size: H45 x W14 x D6cm approx. RRP £17.99
Stockists: Disney Store and Disneystore.co.uk 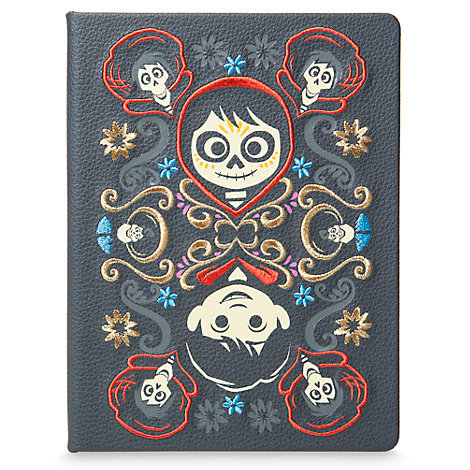 Soon Coco will get lots of fans who will be on the hunt for anything branded with the colourful Mexican themes. This skullified Día de los Muertos style A5 notebook will come in very handy although I will rather use it to keep lovely memories (it has 80 pages of space!). It features endearing detailed multi-colour and gold embroidery, a hard cover and a colourful motif on every lined page.  RRP £10.99
Stockists: Disney Store and Disneystore.co.uk

This entry was posted on Monday, January 15th, 2018 at 2:23 pm and is filed under Movies. You can follow any responses to this entry through the RSS 2.0 feed. Both comments and pings are currently closed.