Disney Pixar is back with a bang with its new animation Onward. It provides lots of laughs, giggles, and emotional moments too. On a personal level, when I was a teenager (age of Tom Holland’s character) I had a phase in which I was also desperate to meet my biological mother who passed away when I was only three. This movie tapped into those deep memories and made me emotional throughout the two brothers’ journey to bring back their late dad using old forgotten magic. It’s a must-see animation. Onward is released in UK cinemas on 6 March 2020. 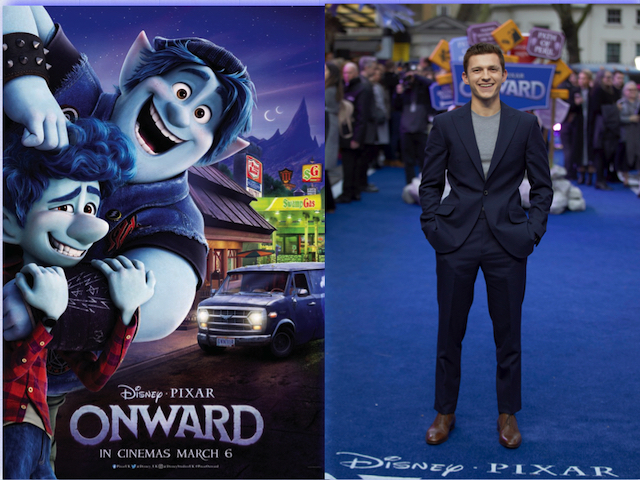 Two teenage elf brothers, Ian (voiced by Tom Holland) and Barley Lightfoot (Chris Pratt), go on an journey to discover if there is still a little magic left out there in order to spend one last day with their father, who died when they were too young to remember him. Their father died before Ian was born. He left his sons a magical gift to open on Ian’s 16th birthday: a spell to bring him back for 24 hours. The spell does not work completely: the brothers end up with only their father’s feet and legs. They go on a quest to materialise the rest of him before sunset? The brothers bond over a dangerous quest to complete the spell.

Onward‘s story is original, inventive and lovely. I dare say that it is better than Toy Story 4. It reminds us what Disney is capable of doing and makes you forgive them for the past 12 months in which we have seen many remakes and sequels. I personally love anything Disney but original productions like Onward are obviously the best work. As their first original story since 2017’s Coco, Pixar has really done a great job with this animation once again.

OH BROTHERS – In Disney and Pixar’s “Onward,” two teenage elf brothers embark on an extraordinary quest in a van named Guinevere to discover if there is still a little magic left in the world. Featuring Tom Holland as the voice of Ian Lightfoot, and Chris Pratt as the voice of Ian’s older brother, Barley, “Onward” opens in U.S. theaters on March 6, 2020. ©2019 Disney/Pixar. All Rights Reserved.

Onward’s colourful imagery is stunning. Storylines provide quotes and ideas that stay with you beyond the two hours of the screening.

In Disney and Pixar’s “Onward,” brothers Ian and Barley (voiced by Tom Holland and Chris Pratt) are given a gift that allows them to conjure their dad—half of him, anyway—for one magical day. Their subsequent quest to conjure the rest of him is filled with magic, impossible obstacles and some unforgettable moments. Directed by Dan Scanlon and produced by Kori Rae, “Onward” opens in U.S. theaters on March 6, 2020.  © 2019 Disney/Pixar. All Rights Reserved.

A lot of the hilarious gags happen when the brothers drag their dad’s legs behind them like a little pet. Initially the half body was a bit awkward but once you get used to it, it provides lots of comedic moments.

This entry was posted on Tuesday, March 3rd, 2020 at 6:37 pm and is filed under Movies. You can follow any responses to this entry through the RSS 2.0 feed. Both comments and pings are currently closed.