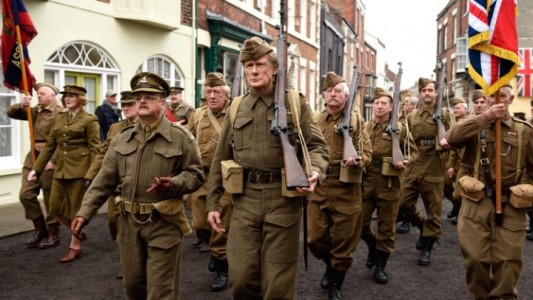 It’s 1944. A German invasion is very much on the cards and in Walmington-on-Sea Captain Mainwaring (Toby Jones) and his Home Guard platoon are on high alert. They’re preparing to take part in a major military exercise and, at the same time, they discover a German spy has infiltrated their patch. Coincidentally, glamorous journalist Rose Winters (Catherine Zeta-Jones) arrives in town to write a feature on the Home Guard, setting male hearts a-flutter and causing more than a little consternation among the local ladies. It’s a complication situation that will test Mainwaring and his men to the limit …….

You don’t need me to tell you that the arrival of Catherine Zeta Jones’ journalist is just a wee bit more than coincidental. It’s just too obvious for words and, unfortunately, it also gives you a very good idea of what to expect from the entire film.
This isn’t, by the way, the first time Dad’s Army has appeared on the big screen. The first film version was back in 1971, when the TV series was in its hey-day, but it was little more than an extended version of an episode of the show, stretched to the limit to fit the mandatory 90 minutes. This time round, director Oliver Parker and writer Hamish McColl have come up with something that’s designed to stand up on its own. But it falls flat on its face.
A look at the cast sends your expectations sky-high. Apart from Toby Jones (one of our best character actors) and Zeta Jones, there’s Bill Nighy (Wilson), Tom Courtney (Jones), Michael Gambon (Godfrey), Bill Paterson (Frazer) and Daniel Mays (Walker). With a “who’s who in British acting” list like that, surely it can’t fail. 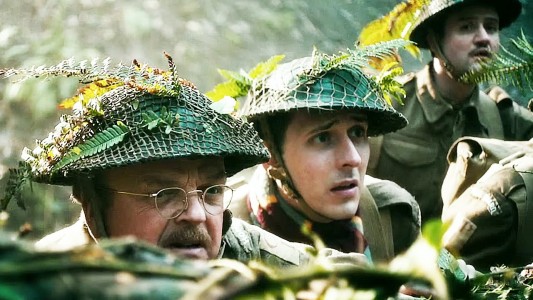 The sad news is that it does. I should say, though, that it’s not the cast’s fault as they do their utmost to keep the whole thing afloat and you desperately want them to succeed. And, while some of the actors aren’t quite as well cast as you might have expected, Michael Gambon is a delightfully good- natured Godfrey and Bill Nighy makes an urbane Wilson, this time with something of a more intellectual edge.

The problem lies with the script. The cast ends up with even less tools to do the job than the original Home Guard. Not only is the storyline just plain old hat, but the whole thing is painfully unfunny. Any attempts at humour, be they double entendres, physical gags or puns, are so lame they hardly raise a smile. Worse still, infantile gags about roly poly and sausages are nothing short of embarrassing. In fact, there was more of a reaction among the audience to the cameo from Ian Lavender (the original Private Pike) than there was to any of the limp efforts in the humour department.

It’s a desperately unhappy experience all round. You want the film to revive all those warm, cosy memories of the TV series, but it comes nowhere near. It’s a terrible waste of the cast and all you can do is sympathise with them – and wonder what writer Hamish McColl (who also wrote the delightful Paddington) thought he was doing. He’s forgotten an absolutely essential element of Dad’s Army. It’s supposed to be a comedy. 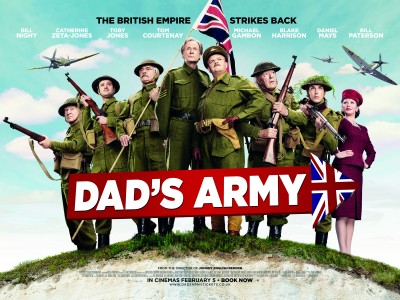 The sad truth about Dad’s Army is that its writer and director should have left well alone. They’ve produced something vastly inferior to the original, so much so that it’s wince-making. Fans and newcomers to Dad’s Army would be far better off binge watching a box set of the original. What’s already been re-christened Dud’s Army is a sorry sight all round.

Dad’s Army is released in cinemas on Friday, 5 February 2016 and reviewed on Talking Pictures on Thursday, 4 February 2016.

Tags:  Bill Nighy Bill Paterson Catherine Zeta-Jones Dad's Army Daniel Mays Hamish McColl Michael Gambon Oliver Parker Paddington Toby Jones Tom Courtney
This entry was posted on Tuesday, February 2nd, 2016 at 1:05 pm and is filed under Movies. You can follow any responses to this entry through the RSS 2.0 feed. Both comments and pings are currently closed.