Cyrano is written by Erica Schmidt and directed by award-winning director Joe Wright. A fresh, modern take on a classic form, Cyrano OST will be cherished by anyone whose playlists include songs such as; I Need My Girl, Light Years, England, Fake Empire, The System Only Dreams in Total Darkness……

Cyrano is the 4th production of the great romantic French play that I’ve seen. There have been other versions but under different names.

In all the other Cyranos they only had to overcome their tremendously unusual noses, but in this movies Peter Dinklage has to overcome lack of height plus prejudice about his body type. 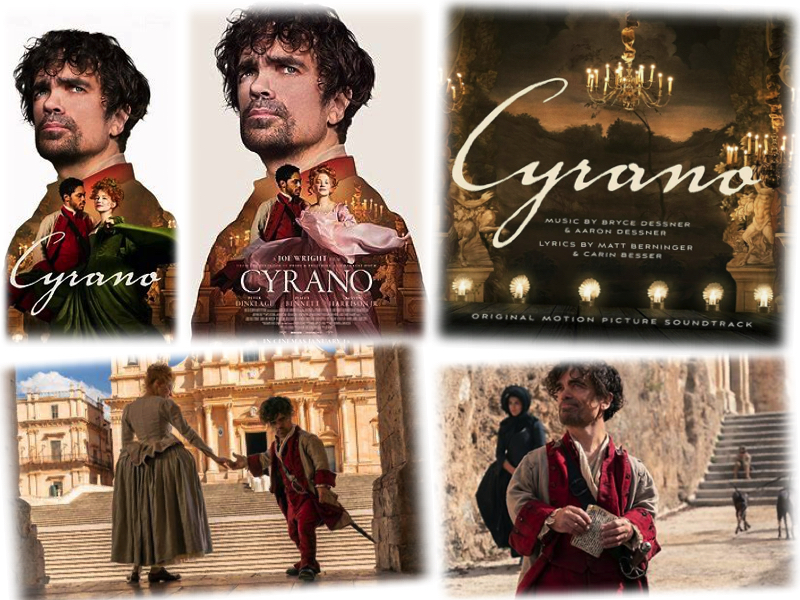 Award-winning director Joe Wright envelops moviegoers in a symphony of emotions with music, romance, and beauty in the upcoming musical drama Cyrano, re-creating the timeless tale of a heartbreaking love triangle. A man ahead of his time, Cyrano de Bergerac (played by Peter Dinklage) dazzles whether with ferocious wordplay at a verbal joust or with brilliant swordplay in a duel. But, convinced that his appearance renders him unworthy of the love of a devoted friend, the luminous Roxanne (Haley Bennett), Cyrano has yet to declare his feelings for her — and Roxanne has fallen in love, at first sight, with Christian (Kelvin Harrison Jr.).

In scenes that are sometimes comic but more often tragic, the pretence becomes difficult to maintain; Christian (Kelvin Harrison Jr.) finds himself increasingly frustrated at his ineloquent manner, and Cyrano falls more and more deeply for Roxanne (Haley Bennett), a woman who doesn’t realise he loves her.

I do like Peter Dinklage, but I don’t feel like this was his strongest performance, both in regards to the acting and the singing.

He does not suit the romantic lead. I don’t know why we needed another adaptation of Cyrano surely after the fourth production they would stop.

My favourite thing about Cyrano is its soundtrack.

Cyrano’s powerful soundtrack, recorded at Abbey Road Studios, is written and composed by Bryce and Aaron Dessner of Grammy Award-winning American rock band The National with lyrics from the band’s Matt Berninger and songwriter Carin Besser. The National’s heart-shredding albums have held places in the top five official UK charts for the last two decades. The unique tones of The National echo throughout the expansive score, enhancing the film’s beauty, romance, and raw emotion. From wistful, dream-like melodies in Someone To Say, to the thundering rhythms in When I Was Born and the achingly beautiful Every Letter, Bryce, Aaron, Matt, and Carin have created a soundtrack that is wholly integral to the script.

The soundtrack features cast vocal performances from Peter Dinklage, Haley Bennett, Kelvin Harrison Jr. and Glen Hansard with music from London Contemporary Orchestra, and renowned pianist Víkingur Ólafsson throughout, including the solo piano track Saying Goodbye, written by Bryce Dessner and which plays out the album. Somebody Desperate is an exceptional addition to the soundtrack. The song, which is featured during the film’s end credits, is written and performed by The National. The soundtrack follows Bryce Dessner’s award-winning film score work as well as Aaron Dessner’s recent Album of the Year Grammy Award for his work co-producing and co-writing Taylor Swift’s Folklore, orchestrated by Bryce.

Cyrano OST is out now via Decca Records, with CD, LP & White coloured

This entry was posted on Sunday, February 20th, 2022 at 11:10 am and is filed under Movies. You can follow any responses to this entry through the RSS 2.0 feed. Both comments and pings are currently closed.