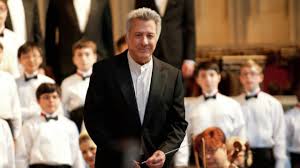 Rebellious 11 year old Stet (Garrett Wareing) lives with his single mum. But the head teacher (Debra Winger) at school also knows he has a great voice and tries and to get him to audition for the prestigious Boychoir. He walks out and that seems to be the end of it. But months later his mother’s dead, his stranger of a dad turns up and buys Stet a place at the Boychoir school.   It’s a struggle for him initially: he comes up against Cavelle (Dustin Hoffman), the main tutor, as well as the school’s best singer, Devon (Joe West). But, as time goes on, the school brings out the best in him, and not just his singing.

A young, talented musician goes to an elite school and clashes with its main tutor. Sound familiar? It should do. It’s the same idea behind the Oscar winning Whiplash, which was released at the start of the year. Except that director Francois Girard has stripped it of its intensity, savagery and raw energy and produced a softer, more sentimental version of the story. It’s like watching Whiplash For Kids. There’s nothing wrong with taking a different approach, but the sad truth is that this is also an inferior version with soap suds smothered all over it. There were moments when I really wanted J K Simmons’ Terence Fletcher from Whiplash to charge into the room, hurl a chair at somebody and let rip at some poor, unsuspecting choir boy. He would have given the film the shot in the arm it really needs, PG certificate or no PG certificate. 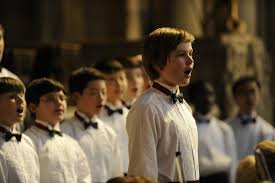 The other problem is that the clichés come thick and fast, so you imagine the director ticking them off a check list to make sure he got them all in. On the day of the choir’s biggest concert, star soloist Devon is struck down by a sore throat and can’t perform. So Stet has just a few hours to step into his shoes. Check. As Stet gets ready to sing, he opens his folder to find it’s empty. Devon is in the wings, looking demonic in his hoodie, with the score in his hands. Check. See what I mean?

Which means you have a certain sympathy with a cast that not only boasts Hoffman and Winger, but Kathy Bates, Eddie Izzard and Glee’s Kevin McHale. Hoffman genuinely plays the piano in the film, but he looks less comfortable in front of the choir with baton in hand. There’s little sense that he feels the music or that it means as much to him as he says. It’s his number two, Drake (Eddie Izzard) who lives and breathes the music and you can almost see it flowing through his body when he listens or conducts. Kathy Bates manages to breathe some life into her fearsome but soft-hearted headmistress, but a cast of this calibre deserves more to get their teeth into. 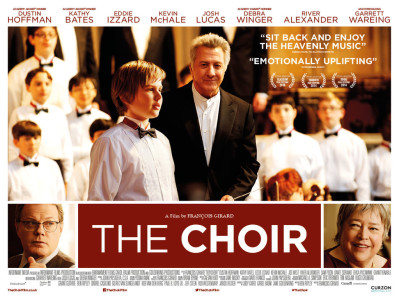 The one thing that is absolutely superb about The Choir is the singing. Anybody who loves classical music, and especially the choral variety, will find that aspect of the film a complete joy. And, to be honest, even if you’re tone deaf, you’ll still find it’s so beautiful that a tear may just well up. Sadly, though, the film itself doesn’t match up to the music or, indeed, its talented cast. It’s followed the “family film = soft and sentimental” equation far too closely so that something with the potential to be a powerful story ends up being wishy-washy.

The Choir is released in cinemas and on demand on Friday, 10 July 2015. It will also be reviewed on Thursday’s edition of Talking Pictures.

Tags:  Debra Winger Dustin Hoffman Eddie Izzard J K Simmons Kathy Bates Kevin McHale The Choir Whiplash
This entry was posted on Wednesday, July 8th, 2015 at 7:00 pm and is filed under Movies. You can follow any responses to this entry through the RSS 2.0 feed. Both comments and pings are currently closed.