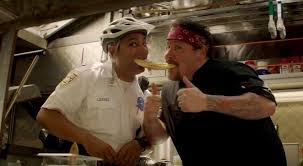 Carl (Jon Favreau) is head chef at a fashionable Los Angeles eatery.  Then the combination of a bad review from a popular restaurant blogger and a confrontation with the restaurant’s control-freak owner puts him out of a job.  He reluctantly takes on a food truck, firstly to get back his passion for food and cookery and secondly to re-build his relationship with his estranged wife and young son – who also happens to be a whizz on Twitter.

Jon Favreau, who’s probably best known as the director of Iron Man, isn’t just the star of the film.  He wrote, produced and directed it as well and it’s an approach that’s paid off by the plateful.  It’s a contemporary comedy with real heart, full of great one-liners, energy and a soundtrack that’ll make you dance in your seat, as it were.  And you’ll be walking – if not trying to dance – to the rhythm of that music as you come out of the cinema.

It has to be said that Twitter will be thrilled with Chef, as the film illustrates the power and pitfalls of the social media.  It’s the cause of Carl’s downfall and helps him get back on his feet with the food truck.  And his ignorance of Twitterquette, compared to his young son’s in-depth knowledge, brings about a good slice of the comedy.  We, in the audience, like to think we’re as savvy as the kid, of course!

There is, of course, more to the film than just the story of a food truck.  There’s the story line about Carl’s broken marriage.  He’s separated from his wife, Inez (Sofia Vergara) and, big man though he is, he’s seriously punching above his weight.  His relationship with his ten year old, Percy (Emjay Athony) isn’t all it could be either: he knows he’s not been a great husband or father but his passion for food and cooking always seems to get in the way.  The truck, a wreck to being with, is the start of putting everything back together.

The film has a great cast, not just Favreau himself but John Leguizamo as his side-kick and Bobby Cannavale (from Blue Jasmine) as a hopeless sous-chef, who all make a great team in the pressurised, sweaty confines of the restaurant kitchen.  Tucked away in small but significant roles are some big names, like Dustin Hoffman as the nightmare restaurant boss and Scarlett Johansson as the front-of-house manager, with a soft spot for Carl.  But the real star turn belongs to Robert Downey Junior, whose couple of minutes as Inez’s slippery former husband is a small piece of comedy gold. 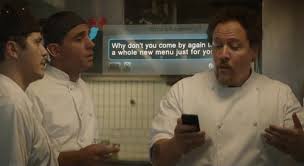 Chef is the perfect feel-good movie – and the food will make you feel even better.  It has energy, warmth and just simply great fun.  Make no mistake, though – it’s definitely for adults, as you can tell from the cute editing in the trailer.   You won’t be surprised to hear that it has a happy ending – it couldn’t have had anything else.  And what’s wrong with that?

Tags:  Bobby Cannavale Chef Dustin Hoffman Iron Man John Leguizamo Jon Favreau Robert Downey Jnr Scarlett Johansson twitter
This entry was posted on Monday, June 23rd, 2014 at 12:00 pm and is filed under Movies. You can follow any responses to this entry through the RSS 2.0 feed. Both comments and pings are currently closed.